Homecoming of the White Sweater

In August 2004, I went to Hay-on-Wye for the first time on a book buying binge with Howard and Stephanie. Somewhere in the middle of a day full of bookshops, I fell in love with a knitting pattern from a book of 1980's designer knits. Stupidly, I put the book back on the shelf, arguing that it wasn't worth paying £7.50 for one pattern in a book full of 1980's shoulder-padded nightmares. A big mistake. That sweater haunted me: in my memory it was a winter-white cable which started in (probably) K4P4 rib; about half way up, the middle ribs formed the first of a heart-shaped cable, then other ribs joined in, cabling out in a triangle from this base until the shoulders were completely covered in heart shaped cables. The design repeated itself up the sleeves. The more I thought about it, the more I kicked myself for not buying the book.

After two weeks, I couldn't stand it any longer. I had to work in Worcester for the day, so cut out early and drove the extra 40 miles back to Hay to track it down. I couldn't remember what it was called, which shop it was in or when we had visited that shop. Stephanie, God bless her, did and emailed me rough directions. I got to Hay at 4.10pm and began running through the shops, backtracking our steps, praying I'd find it before the shops started closing up at 5pm. It was in the third store I entered, Addyman Books, on the shelf where I'd left it! 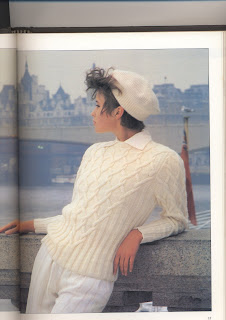 It's Eloise, from Christian de Falbe's "Designs in Handknitting", published in 1988 or 1989. Isn't it stunning? I remember phoning DH in triumph, "I found it! I found it!". I was on top of the world.

Eighteen months later, it reached the top of the "To Knit List" and I started work in Rowan's Cashmerino DK. Six months later, I finished the last sleeve, sewed up a shoulder seam and knitted the neck. Then, somehow, I stalled. My beautiful sweater languished in the knitting basket, while I whizzed through multiple pairs of socks, a cardigan, and the Reynold's Lace Tee. I finally stitched up the last seam in January.

It seemed only fitting to wear it on our trip back to Hay-on-Wye. 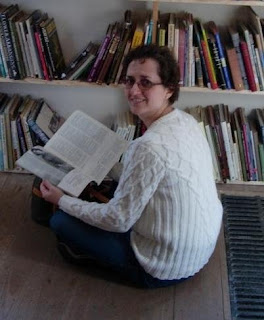 And to take it back to the bookshop where it all started, Addyman Books. 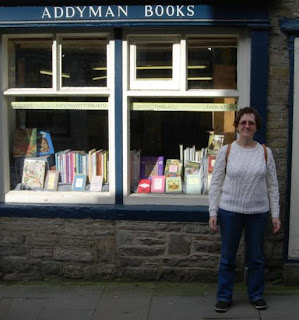 What an awesome sweater! I love the shaping on it. It hath interest, AND flattering curves!

It's nice when everything wraps itself up in a nice bow like that... nice work!

(and yes, you do wear it well)