I didn't mean to be silent for so long.  The job is hell as usual.  Nothing personal, just too much work and not enough me.  As well as the usual shutdown between Christmas and New Year, I took the week off before Christmas and have spent the time winding down.

Saturday morning, I sat drinking coffee, watching the snow fall and listening to the cricket live from the WACA in Perth, Western Australia:  England versus Australia.  In my head, I could see a hot summer's day bathed in that glorious golden Australian light. What a contrast.   Britain has been caught out again by winter.  You'd think they'd learn. It snowed for three hours causing chaos as usual:  the second runway at Heathrow was closed for days; Eurostar trains were cancelled; roads closed.  We've had snow on the ground ever since, with the odd flurry to top it up.

We did "Polish" Christmas last night:  roast goose with chestnut stuffing, roast potatoes, roast onion, honey glazed parsnips, broccoli, and orange sauce; then the presents and then Christmas Pudding.  It was just the two of us this year and that was perfect.   Guess what DH gave me for Christmas?  The complete series of The Good Life .  I didn't even know it had been re-released!  I feel thoroughly spoilt.

The goose was an interesting cooking challenge since it was too long for the baking dish, even diagonally. 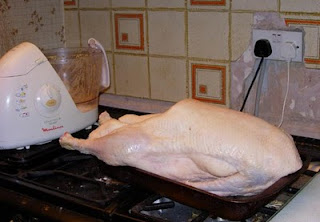 It ended up getting roasted with its feet in the air, wrapped in foil and propped up on the side of the oven.  (Note to self:  next time 30 minutes a kilo at 170C, draining of fat every half hour.)   Although DH had picked up a turkey on a visit to the butcher earlier in the month, I really wanted a goose*.  The butcher said he could get one but it'd "cost an arm and a leg".  We collected him on Tuesday and I hate to break it to our kosher butcher, but at £46, his goose was cheaper than the non-kosher one I bought two years ago for Christmas at Peter's (£70-odd, IIRC).   The turkey is in the freezer for later in the year.

Today, we're off to friends to have another Christmas.  I'll leave you with one other lasting memory:  my husband insisting he wasn't cold, clearing snow from the cloches in the veggie patch. 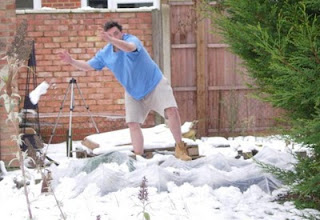 Eat your heart out, Crocodile Dundee.  You aren't as hard as DH.  :o)


*  This is the first year since we moved into the house that the stove has been wired in and I could use its electric ovens.  Except for last year when I did a duck in the microwave-convection oven, every other year I'd prep the turkey but it'd get roasted in my MIL's oven before being brought back here for dinner.  I wanted to celebrate having a proper working stove by cooking something I haven't been able to cook, so enter the goose.
Posted by PipneyJane at 09:11 1 comment:

Could someone in the Chelsea hierachy please explain to me:  what is the point of Salomon Kalou? You play him as a foward but, lets face it, he can't score goals.  In four years, he's scored what?  34 goals?    Even your prize defender, John Terry, has a better goal scoring record than that.

Kalou just isn't up to the job you're giving him.  Do you know his nickname on the terraces?  Forest.  As in "Forest Gump".  He'll run forever, but he can't tackle and he can't score.  Why did you get rid of decent players, like Joe Cole and keep Kalou?

And you wonder why we're struggling.

This is Herdy.  Herdy, is a sheepy-bank. 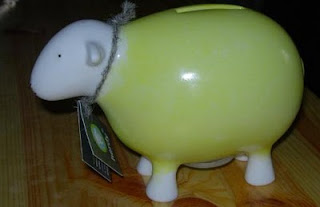 Herdy was a Christmas present, last year or the year before.


Every evening, Herdy gets fed with 1p, 2p, 5p and £2 coins.  DH and I have been collecting them since 1999.  We have larger containers for them than Herdy but they were put into storage when we started the building work in March so Herdy came into play.  Today, we emptied a very full Herdy. 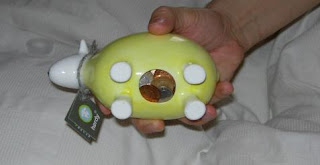 It took quite a bit of shaking. 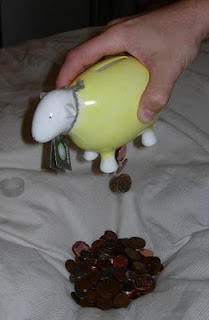 And the £2 coins kept getting in the way. 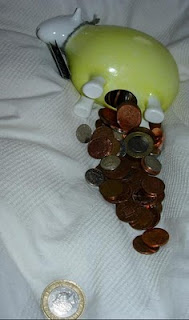 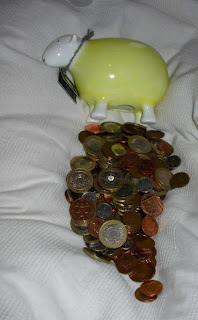 As you can see from the picture with DH's hand, Herdy is not huge.  Even so, he contained: 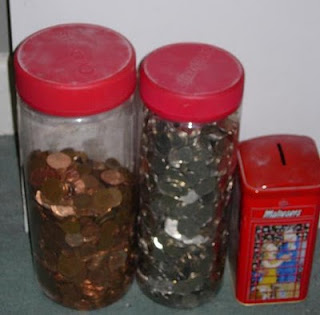 When full, we'll bag them, tag them and take them to the bank.  The coppers jar holds about £22 when full.  The 5p jar has never been emptied, was last counted at 3/4 full and held around £90 then. (Oh, and it weighed in at 20lb today.)  The Maltesers money box holds £600 and is known as the "running away fund" (it goes towards holidays).

Because we fill these in tiny increments, this is money we don't miss.  We do have one rule we (almost always) apply - if you get one of these coins, don't spend it; take it home to feed Herdy.  When we started the collection, I was inspired by a story told by the Australian finance guru, Noel Whittaker, about a client of his, a single mum living on benefits who saved enough for a deposit on a home for her family.  She did it by applying one rule:  never spend a $5 bill.*  When the £2 coin came out, I decided to do the same with that.  It's a good rule - we've saved well over £2,000 of holiday money that way.

* When my sister was a mortgage broker, she had a client in almost identical circumstances who did something similar.  In her client's case, she'd realised that every time she went shopping and decided to buy a "little treat" for herself, it cost about $5.  One day, she had a lightbulb moment and realised that if she saved all those $5 treats, she could save enough for a down payment on a home.  And so she did.
Posted by PipneyJane at 11:47 No comments: