On the Road Again

Another evening; another hotel.
I’m sure I’ve started a blog post with that line before.  I’m travelling for work, visiting the SAP project team in their home office and staying in a nearby hotel.  It’s cut-over weekend and I’m down here until all the data is loaded.
Tonight’s hotel is yet another example of why I prefer either owner-run hotels with lots of character or the big, commercial chains like Premier Inn, where at least you always know what you’re going to get.  You may remember a weird hotel I stayed at in Manchester in March 2016:  so modern and trendy that there was no wall between the bathroom and the bedroom. 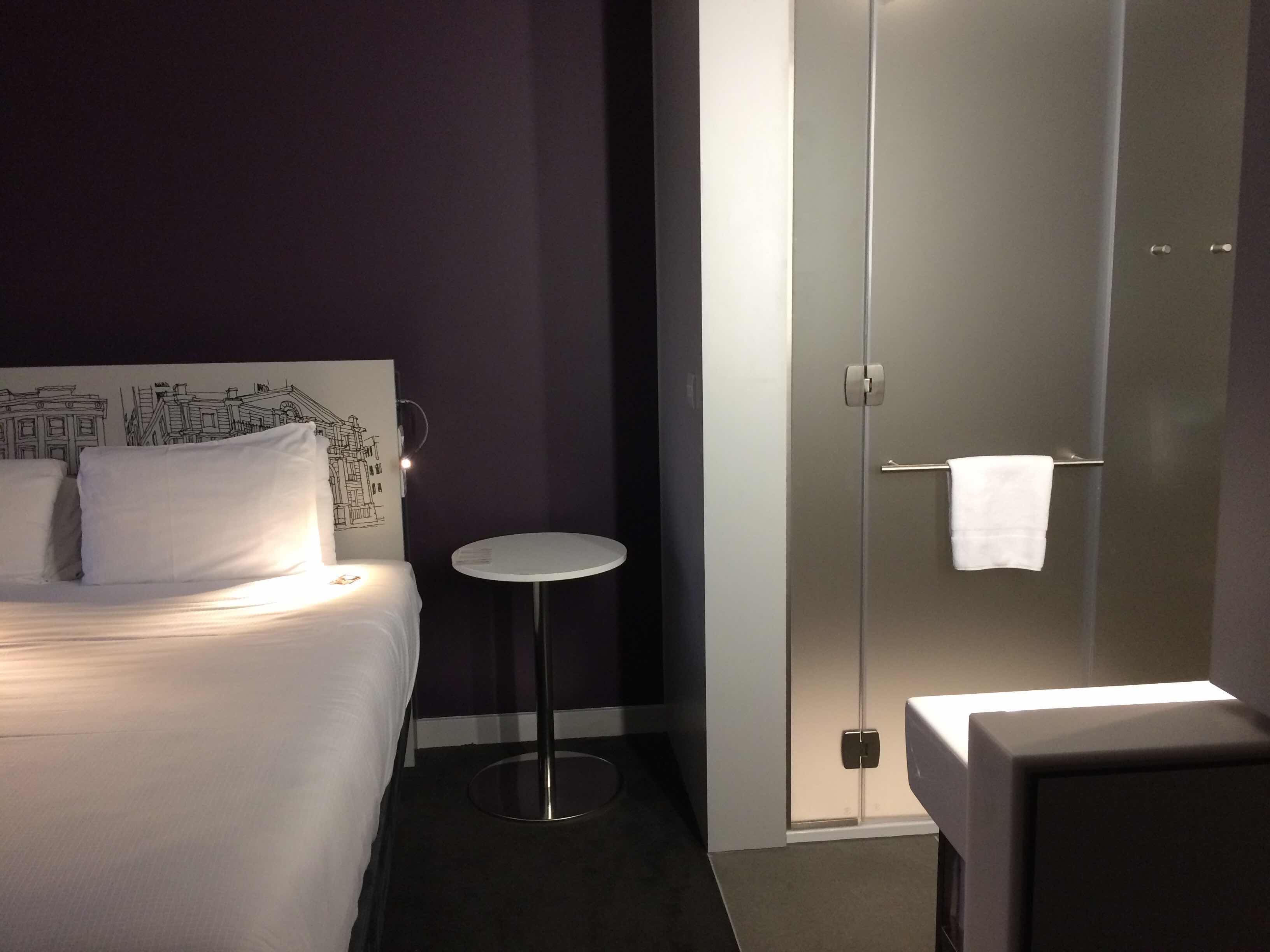 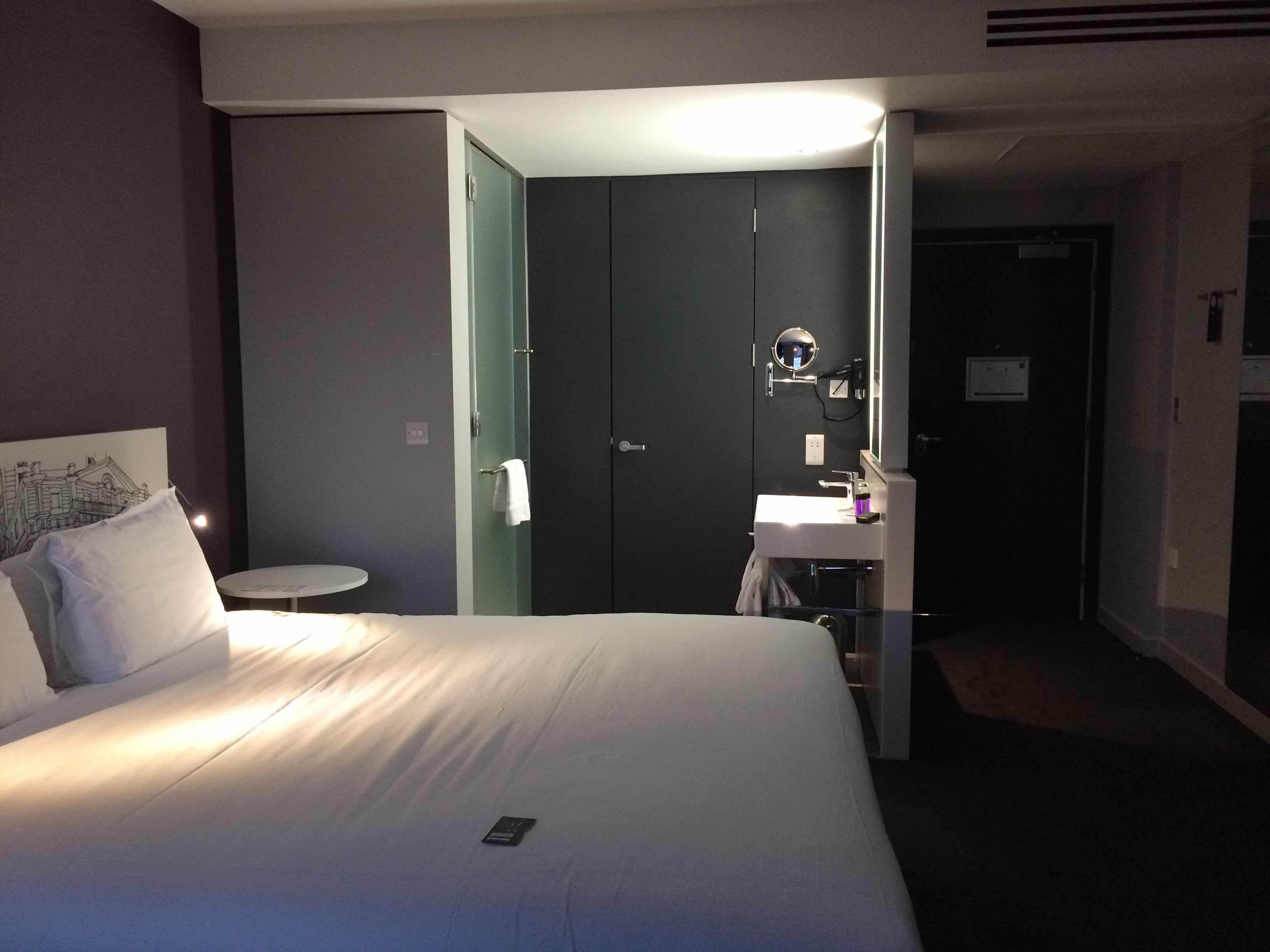 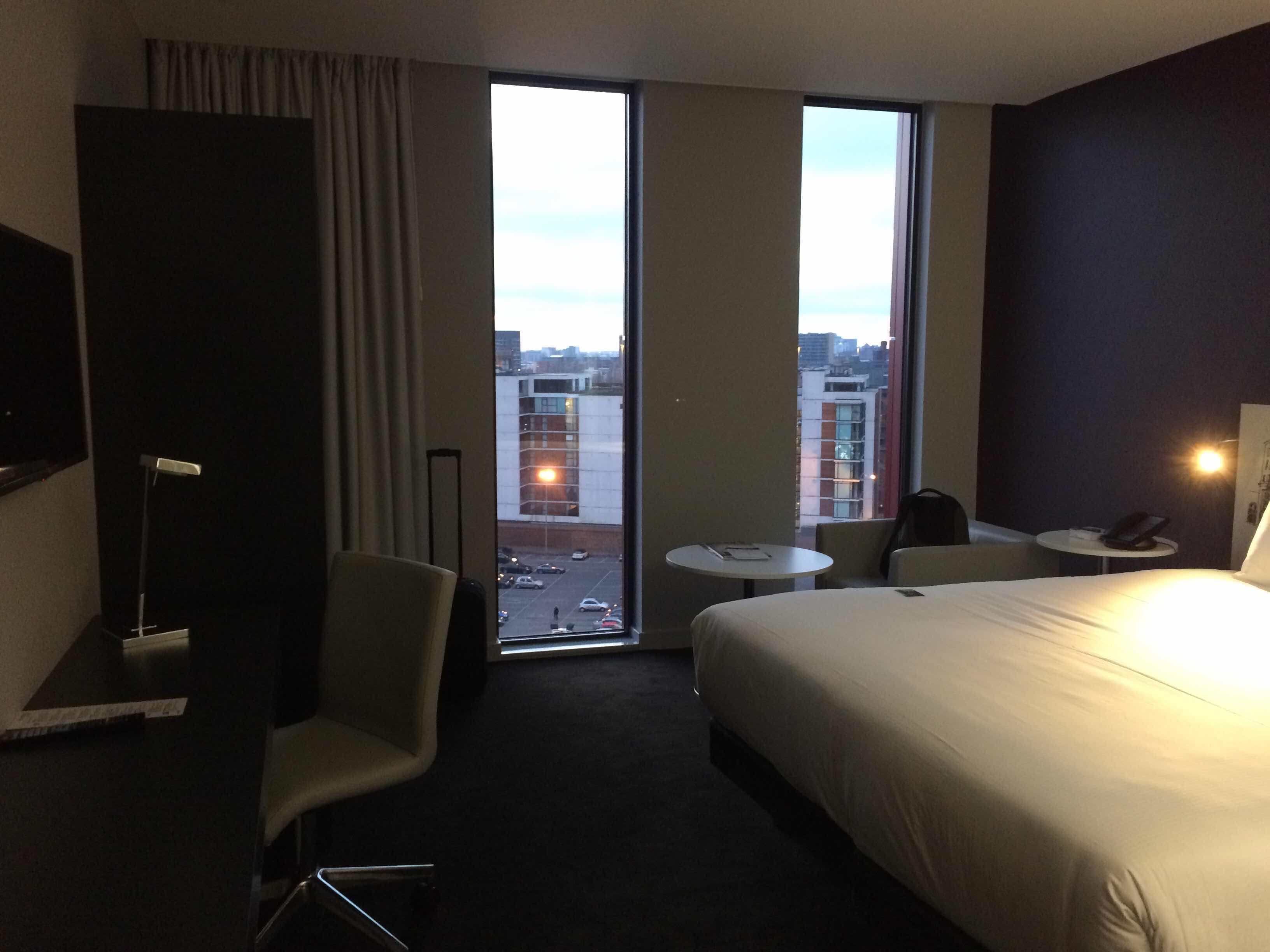 Ring any bells?  To be honest, I can’t remember if I posted my grumble about that hotel here or on Facebook.  At least it had space, even if you could watch the tv from the shower.
This hotel is worse.  When I stay in a hotel, I usually play a game with myself:  how would I furnish/decorate my room if it was converted into a studio flat.  The modular chain hotels are usually best for that game since their rooms are usually quite well thought out. If you ever want to convert a Holiday Inn into studio flats, I’m you’re woman.  I’d keep the bathroom where it is, put wardrobes along the wall by the door and, on the wall that backs onto the bathroom/faces the main roo. I’d build a small U-shaped kitchen less than 2 metres deep.  Throw in a sofa that converts to a bed, a small table with chairs  and plenty of shelves and, bingo, you have a space you can live in.
Not in tonight’s hotel.  It is another over-decorated, modern room, small and rather oppressive.  They have squeezed as much into it as possible,  There is nowhere to put my open suitcase if I don’t want to use the bed.  In the worst possible sense,  someone let an interior decorator loose. 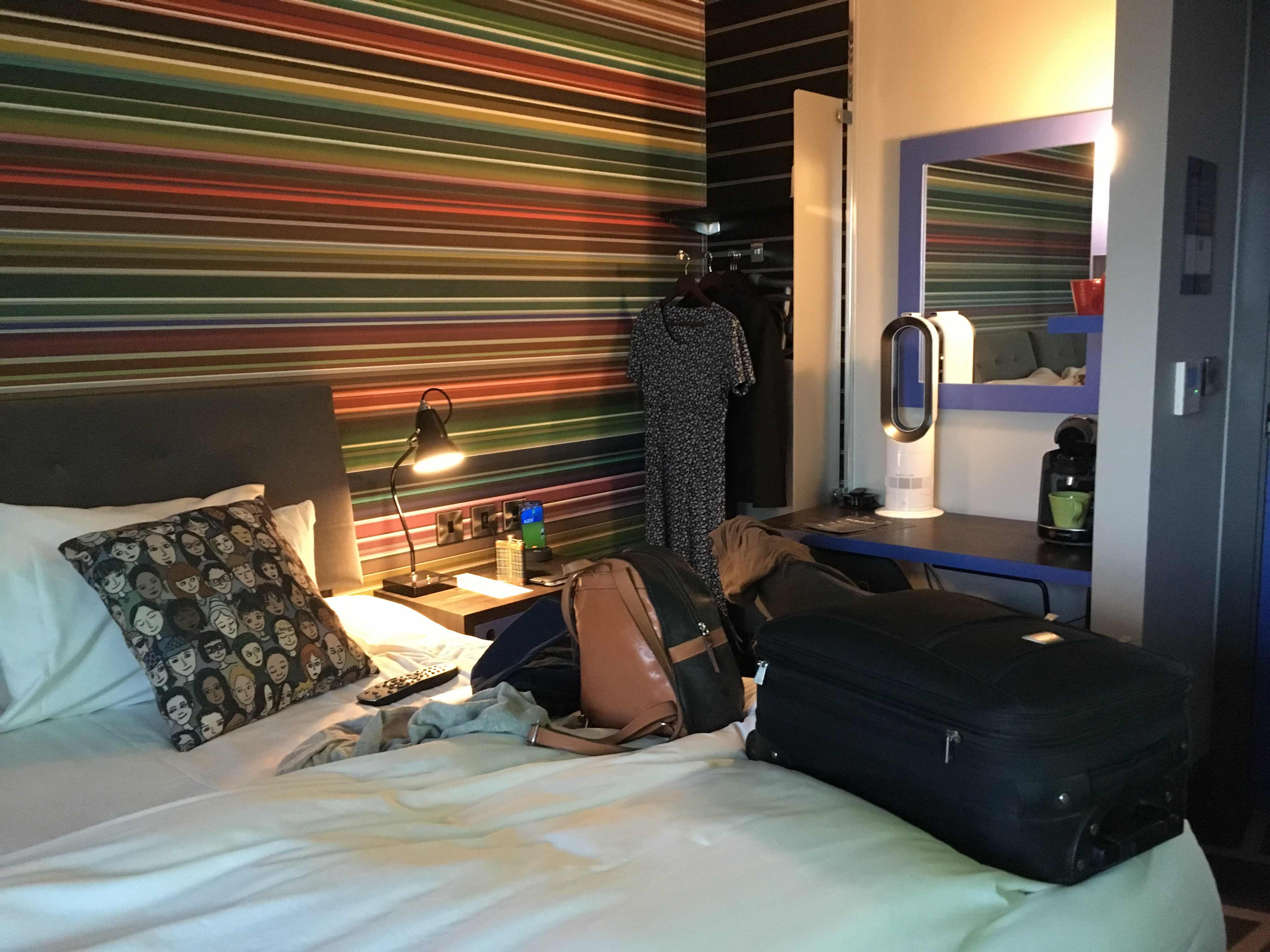 At least, this time, there’s a divider between the bedroom and the bathroom, even if it does dominate the room. I’ve just had  room service*, which I ordered over an hour ago.  It took 5 minutes to figure out how to place my order on the smart-phone-gadget the room has instead of a phone.  Call room service?  Only if you know which symbol to hit.  Naturally, the tray did not fit onto the one-and-only table top. 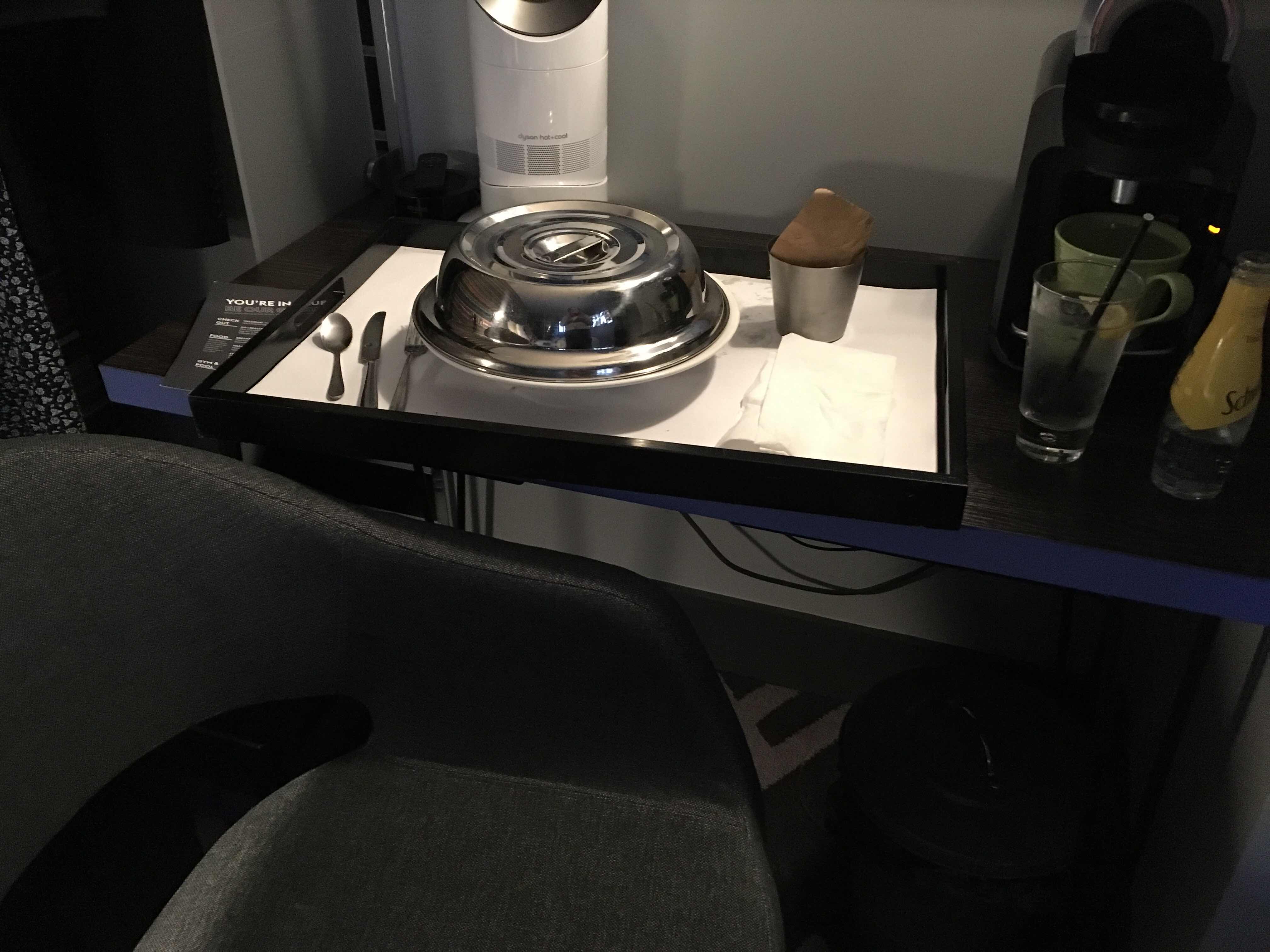 This was the best I could do.  That white thing at the back is a Dyson fan.  Why do you need a fan in an air conditioned room???  (The other side is a Tassimo coffee machine.)
Please God, I don’t get nightmares from the stripes!
- Pam
* Yes, I ordered room service.  England were playing** in the World Cup and, of course, I wanted to watch.  Also, the bar/restaurant downstairs were heaving.  Was it worth it?  No.  I’d have had a better meal in the Subway down the street.  Only the G&T was worth the wait.
** They lost to Belgium.
Posted by PipneyJane at 20:39 2 comments: