The little things add up

As every knitter knows, it’s the little things we do that add up to something big.  In the case of knitting, the “little thing” is creating one stitch after another, which eventually add up to a jumper.  It’s incremental.  The British cycling coach, Sir Dave Brailsford, makes a big thing about incremental gains.  It was concentrating on the small things that took British cycling from mediocre to world class.
I was thinking about this incremental effect on Thursday morning, when I put another 700g of dried kidney beans on to soak.  We didn’t need the beans immediately for dinner, but since there were none left in the freezer, there was space available and I had a few seconds to spare, it seemed sensible to put them on to soak.  Thursday evening, I took a minute to drain the beans, spoon them into a recycled bread bag and shove them in the freezer.  I’ll probably cook them next week in the pressure cooker, use a third for dinner then box up the remaining 2/3 and freeze for two more meals.  (700g dried beans gives 3x500g boxes of cooked beans. Approximately the same as 2 cans of beans from the supermarket).
What does this have to do with incremental gains?  By planning ahead, not only do I save time but I also save money.  It costs the same to process one can’s worth of dried beans as it does to process 6; about a penny’s worth of gas for 30 minutes in the pressure cooker.  The cheapest tin of kidney beans is 30p in Tesco, whereas they sell 2kg of dried beans for £4, which gives me the equivalent of 17 cans-worth for 24p a can, a saving of 6p.  That 6p/can saved can be utilised elsewhere.  It adds up, quietly, in the background of day to day life*.
Small things add up.  The principle of incremental gains works whether you’re trying to keep your living costs low or attempting to tread lightly on the earth by keep your petroleum pollution down.  Dried beans aren’t just cheaper, they need less energy to ship and store than the equivalent weight of cooked, canned beans.  Plus there’s the energy saved from not having to manufacture the cans or mine, ship and smelt the metal.  Remember the recycled bread bag?  It’ll be washed out, dried and reused until it starts to fall apart, when it’ll go into the recycling.  (It’s labelled “can be recycled with shopping bags at bigger stores”.  Our council recycles shopping bags, so will recycle the bread bag.).
“What’s the cost of one bread bag?” you might ask. Not a lot, but that’s not the point.  It all adds up.  Just as you can’t learn and become fluent in a language in a day, so you can’t expect everything you do to create an immediate “Big Bang” impact.  You hear people muttering “why bother? It’s only...” but if everyone does it, then it’ll have a big impact.
- Pam
* In the UK, there’s at least two, rival television programs that demonstrate how much of an impact these small savings have to your grocery bill,  Eat Well For Less and Eat Shop Save. The participants always look shocked when the savings are added up.  (Schadenfreude TV, I love it.)
Posted by PipneyJane at 10:52 1 comment:

The Joy of Stash

One of the pluses of working from home during Lockdown is I’ve been listening to a lot* of podcasts while I work: some knitting-related, some not.  For the knitting podcasts, two of the recurring themes during Lockdown have been finishing WIPs (works-in-progress) and utilising stashed yarn.   Some have been furloughed; some have lost jobs or fallen between the cracks of economic support.  Some podcasters are open and up-front about it - there is one podcaster who only has her part-time wage coming in to support her family of four - while others are less so.
Nobody knows what will happen to the economy before the COVID-19 Pandemic runs its course - I’m half expecting to go back into Lockdown in October - but the UK economy declined by 20.4% in Lockdown. It’s generated a lot of economic uncertainty and the knitting podcasters are worried.   Most won’t openly discuss their finances but the message is clear:  having a yarn stash is a bit like having a woolly insurance policy.  Finished your latest project and want to start something new?  No need to go shopping; just raid your stash.  Got a pile of WIP’s haunting you?  Either knit them/finish them or frog them (unravel) and use the yarn for something else.  Look at all that money yarn you’ve got tied up in something that you’re just not enjoying!  What a waste!
Since I’m on the sleeves of “It Cannot Fail To Please”, last week, I did my own bit of stash diving.   As you may be aware, most of my stash was acquired at yarn shows.  Because you can’t predict what will be sold there, I don’t usually go shopping with a project in mind.  Instead I’ll buy a sweater’s worth of whatever takes my fancy and find a project to fit it.  Sometimes, that’s easier said than done.   In July 2011, I scored 18 balls of “Palette Vintage Series 120/219” worsted weight yarn at a bargain price; nine balls in Red Bud and nine in Macadamia (white).  Hobbycraft were selling it off for £1/ball and I purchased everything they had in both colours.  (At that price, it would have been rude not to.)  However, it’s always been a problem.   It’s never had a viable project.  At 125m a ball, I have 1,125m of each colour which was never quite enough for what I wanted to make.  For years, I’ve fancied using the Red Bud to make Norah Gaughan’s Drift cardigan: 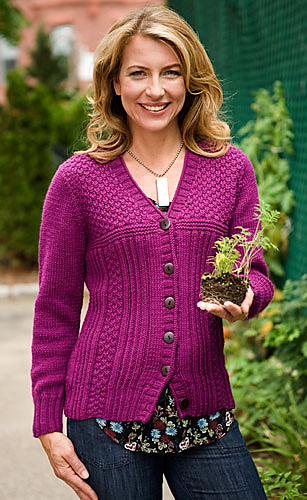 It’s lovely, but the smallest size calls for at least one ball more yarn than I have in either colour and my size probably needs two.  (I never had a plan for the Macadamia.). Finally, last week, I accepted that I would never make this cardigan in that yarn.  I did a pattern search on Ravelry: must be a sweater; in worsted weight yarn; require between 1,000m and 1,200m; and the pattern had to already be in my library.  It turned up Trott (aka Carmine) from issue 25 of The Knitter, which will be perfect for the Red Bud 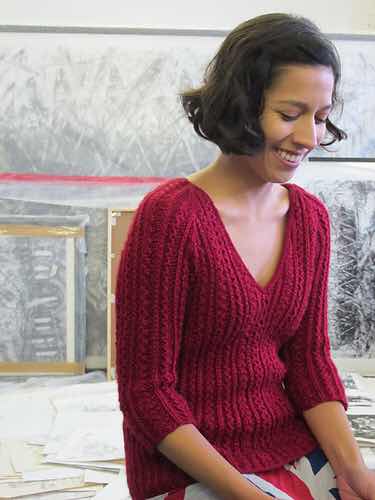 Another search turned up something for the Macadamia:  the Interlacement Sweater, a free pattern from Universal Yarns.  I’ve never had a jumper lined up for that before. 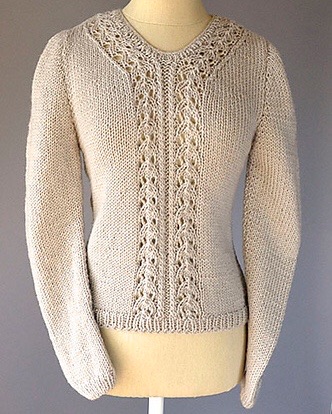 On 4.5mm needles, both jumpers should go quite fast, much faster than the 4-ply jumpers I’ve knitted recently.  Hopefully, I’ll get both of them done by Christmas.  Finally, two solutions for yarn that has been hanging around in the stash since July 2011.
- Pam