The phone charger broke this morning.  Don't think you get away with  it that easily though - I still have the in-car charger AND I ordered a replacement from Amazon.

Just because I'd like an iPhone doesn't mean I'm ready to give up on you just yet.  If you're going to die on me, you'll have to suicide another way.  After 8 years, I've reached the "engineering state" of wanting to find out how much longer you'll last.  Thanks to Lance, owner of your cousin phone, I know your model has longevity and that there are plenty of spare parts available.

You aren't getting away with it that easily.

To my mobile phone,

You gave me quite a scare last week, when you wouldn't charge.  I know you and the phone charger have been together a long time and, no doubt, in such a long relationship, you've put up with quite a lot but did you have to chose Monday to have a spat?  After more than eight years of happy cohabiting , you chose Monday to sulk and refuse to charge.  Why?  At first I thought it was me, talking about my lust for an iPhone which triggered your sulking (you know it's only window shopping and I wouldn't desert you, don't you?). Then I realised it was the phone charger.  What did the phone charger do to upset you?

I'm glad to see that you kissed and make-up on Tuesday. 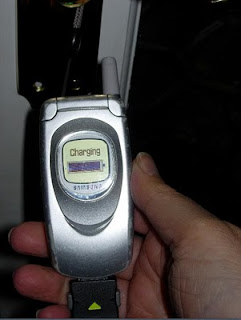 To the woman who taught me horticulture in year 9

I wish I could remember your name.

Our weekly 1 hour sessions seemed a bit like a waste of time - we suspected that we were really cheap labour for the school (remember all the times you had us digging in the kindergarten garden?  I do. That soil was root-bound and rock yard).  You really didn't inspire us to become gardeners.  However, you did teach me some useful things: how to graft roses; how to grow plants from seed, prick them out and pot them on; how to prune.

Why didn't you teach us about growing vegetables and maintaining a vegetable plot?

- Pam (OK, I'll concede your attempts at getting us to dig did help this morning when I turned over the plot)
Posted by PipneyJane at 11:47 1 comment:

I didn't write a SitRep for September mainly because October slipped by so fast that it was the middle of the month before I knew it.   August's report is here.
SOCKS  My September socks were a pair of "use-em-ups" in some leftover self-patterning Harry Potter/Opal yarn.  The colourway was Slitherin, chosen for the blues (I didn't notice the name until days later).  As usual the feet were made in Lisa Souza's Sock! in Ecru. 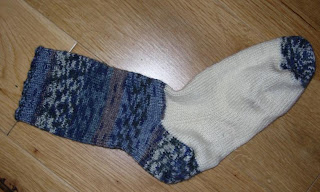 For October's socks, I chose the Hibiscus for Hope pattern I received in 2008 after sponsoring the designer after the Yarn Harlot brought it to my attention (http://www.yarnharlot.ca/blog/archives/2008/08/08/regatta_day.html).  I'm using the darker shade of green Jitterbug I purchased last year at the Knit & Stitch Show. 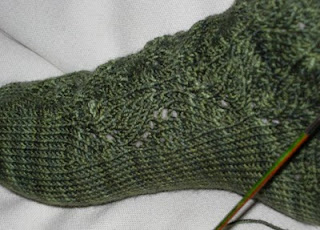 Unfortunately, I still haven't finished the first sock - I'm half way up the leg having re-done the heel twice (I don't like the way the short row heel looks - too many holes at the end of the rows - but, from the pictures in the above post, it looks as if the Yarn Harlot got the same results I did). 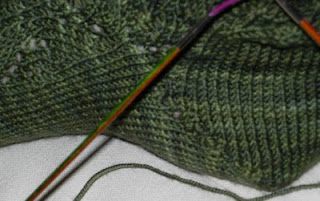 It's a lovely pattern, not difficult, but you do have to keep track of where you are.  (Thank heaven for highlighter tape!)  It would have been too difficult to follow at Sunday's NFL game (yes, I was at Wembley), so I started some top-down simple socks in a self-patterning yarn about 15 minutes before we left the house ........... 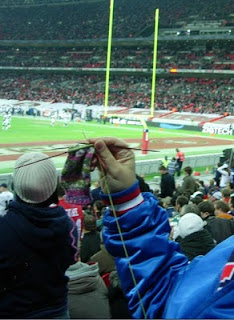 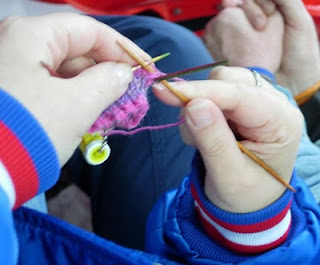 For the record, except for the opening 4 rows,this is how much you can knit during an NFL game and the pre-match entertainment (20 minutes).  I've already started the heel flap. 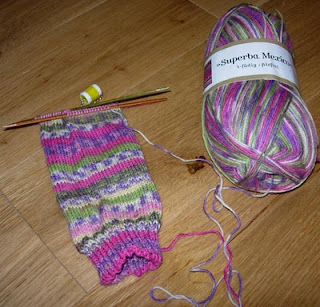 STASH  The second weekend in September was iKnit London Weekend, where I did two classes:  Lopapeysa with Ragga from Knitting Iceland and Knitting Sideways with Woolly Wormhead (check out her amazing hats).  Lopapeysa are the classic Icelandic sweaters, knitted in Lopi, with the plain body and decorative bands around the wrists, waist and neck. We played with Lopi and Lopi-Lite and I now I have a tiny sweater with which to decorate my Christmas tree.  Luckily for the stash, Ragga didn't have any Lopi to sell at her booth or I would have been sorely tempted - it was lovely to handle AND I have the perfect pattern in mind to make with it.  I did buy two more skeins of the Artesano Aran to ensure I now have a sweater's worth; it wasn't in either of the dye lots I already have so I will alternate it with the others.  My remaining stash-cash went on several varieties of roving and a spindle since I've decided to learn to spin. 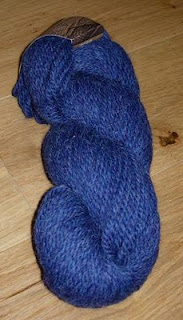 <--cough-->Artesano Aran <--cough-->
October brought the Knit & Stitch Show at Alexandra Palace, which totally blew away the stash diet.  I claim that I was taken prisoner by those horrible, nasty people at Black Sheep Yarns and not allowed out until I purchased a sweater's worth of Sublime Organic Merino DK (13 balls) in grey and a pattern, Sublime's "Willow" sweater. 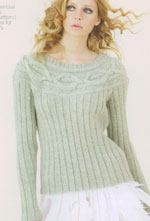 (I'm only kidding:  Black Sheep are the UK's equivalent to Webs and very nice people.  Every year, they bring container loads of close-outs with them, at massively discounted prices. Sometimes their stall resembles a rugby scrum as women dive bodily into the yarn pile in order to find the yarn they want/need.) 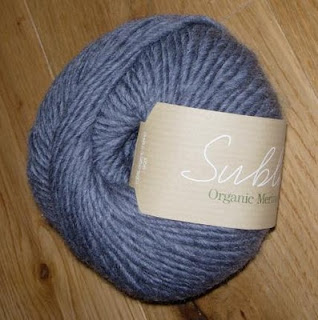 I also failed to resist the Colinette stall:  no mill ends this year but they did have 150g skeins of Jitterbug for the price of the more usual 100g ones.  Three skeins wormed their way into the stash.  So did 3 balls of self-patterning sock yarn at other stalls, including the one I'm knitting above.  (For the record, I purchased 4 but gave a ball of Opal - plus 2.5mm dpns and a pattern - to my friend's mum in an attempt to corrupt her into a sock knitter.)  My final purchase was a skein of Madeleine Tosh cashmere - yum!

In other knitting news:  I finished the Brown Cabled Cardigan last weekend, with only a couple of metres of the Heathland Hebridean to spare, so that's two more skeins finished.  I've also finished the first skein of the Artesano Aran (I'm making Mr Greenjeans from Knitty) and half the second.  Photos to follow when I've got someone to take me modelling the garments.

I have completely lost track of how many skeins that adds up to, but I must be nearing 30 for the year.

GARDEN I harvested all the tomatoes in a mad attempt to get to them before they were overcome by blight. It only took a few minutes to realise that some were already overcome and were rotting inside their skins (the blight seems to liquefy them from the inside out).  The ripe ones were made into two tubs of tomato sauce and then frozen.  The green ones went into boxes with a couple of apples in an attempt to ripen them.  Some did ripen and have been used, others developed a dry white mould and have been binned.

Bought garlic, shallots and broad beans to plant out this weekend.

- Pam (I think this post is long enough now)
Posted by PipneyJane at 19:25 No comments: