Another Opening, Another Show

Or, in my case, "Another suitcase, another hotel".

I'm in Glasgow tonight, staying in a new-to-me hotel around the corner from the office. It's a nice place. My most pressing desire, right now, is to figure out how to switch off the air-conditioning. Yea gods! Is it noisy!

I have two more weeks of flights and hotels. It isn't like the "old days", when I'd turn the Toy right at the end of our street, then head west or north for a hundred miles or so. Air travel has certain constraints: the two items of cabin luggage rule (which means packing my handbag in my case); the 100ml liquids rule (which leaves me hoping the hotel has decent shampoo, since I left mine at home); and the take-your-laptop-out-of-your-bag-at-security rule (which inevitably means juggling multiple belongings like an apprentice octopus).

This definitely isn't the glamorous side of business travel. Certainly, it's more fun when you aren't travelling alone (this trip, I'm travelling with my commercial director), but glamorous it isn't. Nothing is glamorous about being up at 4am to get to the airport before 6. Nothing glamorous about never seeing the city outside the office you are visiting. (Although you know when you've done a flight too regularly when the cabin crew know you by name. (Ahem. Boss.)) Still, I had a friendly greeting from several colleagues and that is worth it's weight in gold. It is nice to know you're liked by people you only see a couple of times a year.

Now, if I can only figure out how to switch off that damn fan....

A girl sat opposite me on the Tube. She's unremarkable - thin, long dark hair, pale skin. Cold. From her bag, she produced an A5 notebook and started to write. Glancing furtively at the lefthand page, I see she's writing a list. I can read the first item: "my apparently awful ability to remember experiences".  From my distance of 4 feet away, I can tell that the rest of her list is consists of additional "faults" and/or a written rebutal to them.  Someone has been snarkily chipping away at her and now she was quietly fighting back.

Memories flowed:  I remember doing it too, back in the dim-and-distant past, when Dumbo was playing his mind-games:  start a list, leave some space,  change pens and write a rebuttal in the space you left.  Counter the negative with something positive. List the nastiness, the petty cruelties, the times (s)he hurt you and didn't notice or care. On a different page, or at the other end of the notebook, write a list of positive things about yourself.  Doesn't matter if it is something simple like "I've got good teeth" - anything to strengthen your sense of self and ensure that someone-else's perverted view of you doesn't engulf your entire life. Make a list of goals and plans: how you'll escape; who you want to be in 6 months, a year, two years time.  Hide the notebook where it can't be found and your rebellion exposed - in your bag, probably.

I watched the girl furtively over my knitting.  I wanted to tell her that she isn't alone; that others have been there too and survived.  And that she is far more worthy than the person who hurt her.  To do that, though, would have been to admit to invading her privacy and to possibly hurt/embarrass her further.  It would also have meant popping the bubble that is travelling on the London Underground, where everyone is in a privacy bubble, travelling in a world of their own.  I could not do that to her.  All I could do was sit and silently wish her well, when she got off the train.

I hope she is OK and that her writing gives her the strength she needs to stand her ground and protect herself.

In which the Toy gets a new "pacemaker"

The Toy has had starter motor problems since the summer. When I got him serviced in September, I told the mechanic that he was getting slow to start and was advised to wait until it got really bad, once winter started, and then get a new starter motor fitted: "No point doing it now. Might not get worse for months. Might as well save your money until then." (This is a local garage not a dealership.) Last Monday morning, I switched on the engine and all Toy could manage was a single, asthmatic wheeze. Waited a few seconds and tried again: the coil light for the glow plugs came on followed by a bit more wheezing. On the third attempt, he started. (Toy is a diesel. Once the fuel is warm enough to ignite, he'll run forever. I bought him new, 12 years and 263,000 miles ago.)

I drove into work, phoned the garage and booked him in for his new starter motor, which was done on Wednesday. He also got two new tyres (they needed replacing) and a set of new wipers (the old ones squeaked even in the past week's heavy downpours). The last time he had his starter motor replaced, 6 years ago, was back when I regularly him to a dealership for servicing and repairs so I was expecting a bill for at least £600 plus the cost of the tyres (say £750 in total). I was pleasantly surprised when I got the bill - £287.17 for everything, including VAT.   My bank balance was much relieved.

Oh, and guess who now eager to get going on these dark wintery mornings and starts first pop?   Makes me wonder exactly how long the starter motor had been going.

Knitting to the foreground

For a knitting blog, I haven't talked much about knitting at all this year, let alone added to the list of finished objects over there ----> on the right.  Time to remedy that a little.  So how am I going towards my goal of knitting six sweaters this year?


Firstly, the Norwegian Sweater that's been lurking in the "What's On My Needles" box is well and truly finished.  I finished the knitting in April eventually wove in the ends in August and gave it to my mother-in-law for her birthday present.  The lavender suits her colouring far better than it suits mine. The only photos I have of it completed do not do the colours justice so here's three, one of it complete, one of a partial jumper and a close up of the yoke, which is the one photo that does show the colours correctly.

Pattern:  Norwegian Sweater
Source:  Knitting In Vogue 2, by Christine Probert, published October 1983 (pattern dates from the 1960's)
Yarn:  Sublime Organic Merino DK in Tuile (main colour) and Felt (contrast)
Mods:  Knitted in the round.  Also, since the yarn is discontinued, I knitted the sleeves first, then the yoke (casting on using the crochet provisional cast on), before knitting the body downwards.  I ran out of yarn at the waist but managed to find some more from McAree Brothers in Scotland. Finally, I did the collar in the contrast colour, back when I was still hopeful it would "lift" the lavender enough to enable me to wear the sweater.


And four babies means four Five Hour Baby Sweaters.  After the first one took two weeks, I decided that two baby sweaters would equal one adult sweater.  I use Courtney Filner's version for a 6-12 month old (the link will take you to it), but in a fit of stash busting I modified it a little to make stripy sweaters when I knew whether the baby would be a boy or a girl.

Each one takes about 125g of yarn.


One of the forums I participate in on Ravelry is the Ankh Morpork Knitters Guild.  We have a Guild Wars competition and, as part of the third round, I whipped out Veera Välimäki's Modern Garden Sweater.  It's lovely; it's quick; it ate up some left-over chunky yarn from my stash....

But it didn't fit me.  And it didn't fit my sister-in-law.  So I've frogged the body to knit it again.  I'd picked the size to knit on the basis that I only had 450g of the yarn (Zettl Alina, bought from Lidl on the rare occasion they sell yarn).  I was lucky enough to have about 75g yarn left over so will knit two sizes up this time and see where that gets me.  Should take a week or two to do the body (I did stay it was fast).


The final sweater I've knitted so far is another vintage Vogue pattern.  This time it's the Cotton Sweater with a Ribbed Yoke from Kntting in Vogue by Christine Probert published in December 1982.  The pattern dates from 1936.

I only have photos of the body, but it is virtually finished.  All that's left to do is to attach the sleeves, weave in the ends and give it a damn good wash.  (Somehow, I've managed to get sweet-n-sour sauce on it from a Chinese takeaway.)

Again, I modified this by knitting it in the round and doing the sleeves 2 at a time using magic loop.  The other thing I always do is finish the shoulder seams using a three needle bind off.


No idea what I'm going to do for sweater 6.  I have a few patterns lined up in my queue, but they'll all take longer than 6 weeks.  Might finish the Moth Wing Shrug I started in March.  Yes, I know it's crochet, but that counts too.

Posted by PipneyJane at 09:37 No comments:

I have been knitting socks since 2006 and, in all that time, I have never holed my socks. Until a moment ago. These were knitted in 2007 or 2008, using left over Opal silk-blend sock yarn for the legs, heels and toes, with the feet in Lisa Souza's Sock!. As you can see, it is the Opal that failed - put my toenail straight through it, getting out of the car. 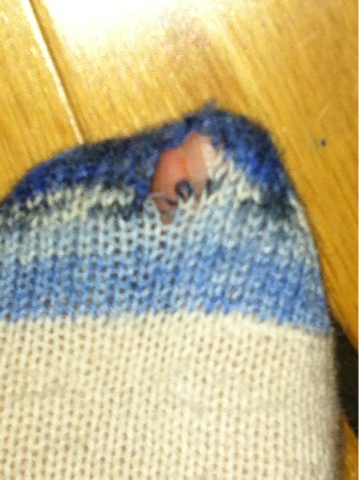 Posted by PipneyJane at 13:34 No comments: