I have spent much of the last few days close to tears.  Nothing bad has happened to me - no family disasters or work related nightmares - and I am not depressed about anything.  It's just that we took a long weekend and spent it in Normandy, in the middle of the American section of the D-Day Landings just outside St Mere Eglise.  We were only a few miles from Utah Beach. 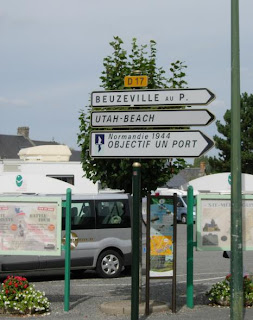 I suppose it is possible to avoid reminders of D-Day when one goes to Normandy, but we couldn't.  St Mere Eglise was probably the first town captured by the Americans after the landings began, when paratroopers were dropped on the village and surrounding countryside.  Their casualty rate was about 50%. 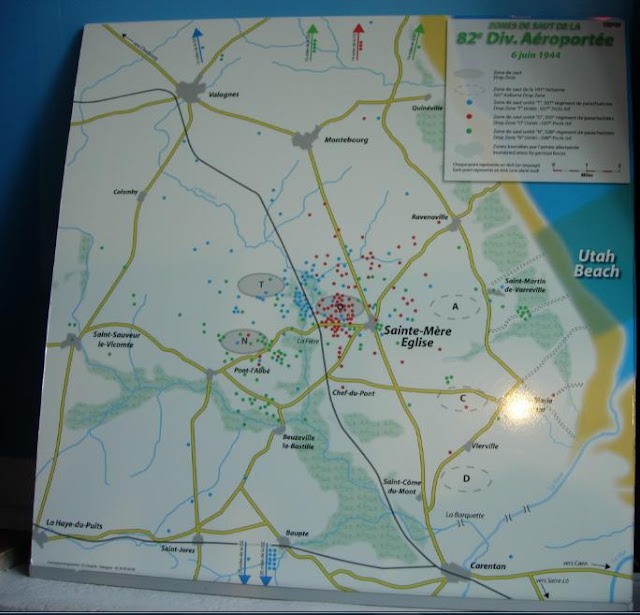 One lucky man (it does depend on how you look at it), John Steele, got caught on the church steeple during his landing and had to play dead while watching his unit being shot to pieces in the square below.  Steele survived.  Today, a permanent reminder hangs from the church tower. 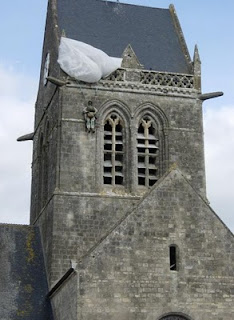 And the museum is dedicated to the 82nd Airborne. 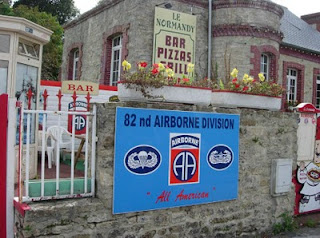 We hadn't planned the trip to be a tour around the memorials but how could we ignore them? The idea was to spend a long weekend staying with a friend in the farmhouse his parents partially own.  Thursday morning, we caught the early ferry from Portsmouth to Cherbourg. 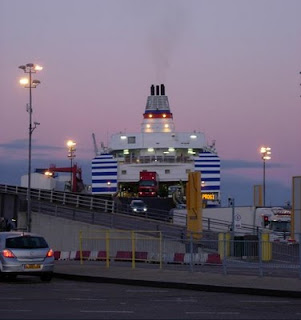 The only "site" on my list was Bayeux - I wanted to visit the Tapestry.  Apart from that, I planned to sleep, laze around, visit a market or two and possibly cook a meal with the results.   Oh, and find a yarn shop (I succeeded and failed at that - the only one I found was closed on Monday afternoon when we visited).

We made it to Bayeux on Friday, saw the Tapestry, and drove to Arromanches afterwards for a picnic lunch.  I was sitting on the sea wall, looking out over the remains of the Mulberry Harbour when it hit me that this is where it all happened.  Gold Beach.  We were at the heart of D-Day and couldn't avoid it.  For much of the battle in France, Arromanches was the Allies only real harbour, towed in pieces across the Channel hours after the landings began (40% of the components were lost at sea); its sister harbour at Omaha Beach destroyed by bad weather days after it was built.

(I wish I had DH's camera handy to raid.  Among the pictures he took at Arromanches is a plaque commemorating the engineering companies involved in designing/building the harbour.  I've worked for two of them.  We used a couple more on my Project, including one of the fabrication companies.)

Once I started looking, I couldn't stop.  We visited the museum at Arromanche and back in St Mere Eglise.  I learned about the markers at the side of the road.  There are two types:  the D-Day Route markers which are numbered, start in St Mere Eglise and follow the route the troups took to liberate France. 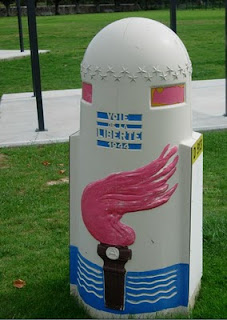 Far sadder are the memorial markers which name a stretch of road after a soldier who died nearby.  In some places, so many men died that they're lined up side by side. 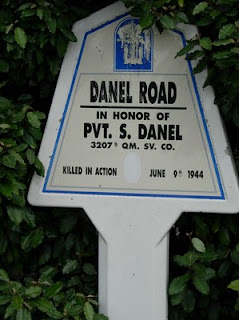 I went round the museums with tears in my eyes but didn't truly break down until we went to Utah Beach.  The beach was empty and windswept. 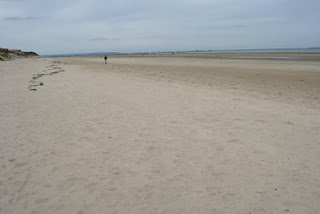 Behind the dunes on the left are the remains of a gun emplacement captured from the Germans.  These days it is the hub of one of the memorials.  Upstairs are flagpoles and monuments.  Downstairs, is a corridor leading to a bunker.  In the corridor a simple plaque said "in memory of our fallen comrades" and listed the names of the men from the unit who died during its capture.  It had been placed there by the survivors; it was personal.  That's when I lost it completely. I went outside and sobbed my heart out.

I cried for all the men who died before their time; for their family members whose hearts were broken as a result; and for the men who survived but were injured and had to suffer in agonised silence so as to not give their position away.  Such a waste.

I'm crying now, as I type this.  I can barely see the screen.

I've been promising some of these for months. 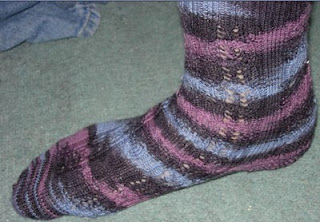 These are from Yarn Forward, in a yarn called "Aurora" from Angel Yarns.  When I bought it off their website, the yarn shown was in jewel shades; I was disappointed to find it was the above muted/muddy colours, but I left it too long to send it back.  Anyway, DH said it would be OK for a pair of socks for him, so I made these.   I still have to take a photo of the back pattern, which was not shown in the magazine and was not related to the pattern shown on the front of the legs. 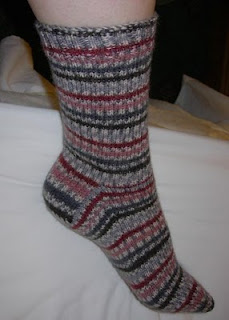 I enjoyed doing these so much that I promptly knitted a pair of use-em-up socks to finish off the yarn. 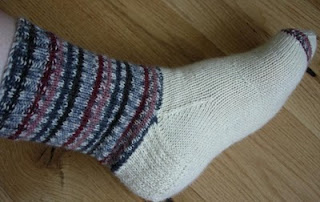 They're a little shorter than my usual socks and, unlike other Ues-em-ups don't have the patterned heel - I'd finished the first one and got half way down the second leg when I realised that I didn't have enough patterned yarn do do the heel and the toe so had to rip back the first sock to make a semi matching pair.

I just love the toes.

In the end, I had a metre left of the Regia.  The other yarn is Lisa Souza Sock! in Ecru.

One pair for Eldest Sis for her birthday, last April: 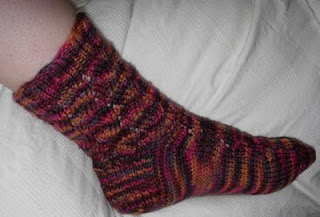 And one pair for me. 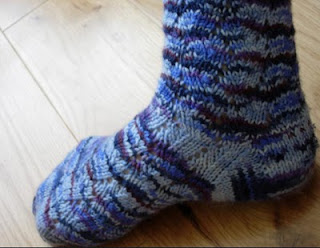 Here is a close-up of the pattern, which is based on multiples of six stitches and is easy to remember. 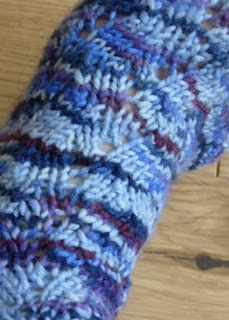 As I mentioned in this month's SitRep, my pair knitted up shorter than the pair for my sister.  Also, I don't know how her pair are wearing but I've worn mine twice and the soles are felting: 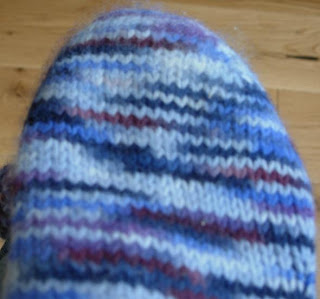 What happened to August???  I'd swear that the last time I turned around it was July.  Anyway, here is my Sit-Rep for August:


STASH  Maintained cold sheep.  Even went into the lion's den today(the yarn department at John Lewis) and avoided buying anything.  Do not expect September to be as good - I-Knit London is on at the end of next week and I'm bound to get ambushed.  Have finished another skein of the Heathland Hebridean (am now half way up the first sleeve), as well as one and a half skeins of sock yarn (Mirasole's Chirapa in the spearmint colourway) so that's 2.5 skeins for a total of 18 skeins used up.


OVERDRAFT  Another £126.12 paid back for a total of £1,096.30 paid back this year.  That is far better than I feared it would be - I fell quite heavily off the wagon and didn't track my spending at all in August.


GARDEN  Not a lot to report:  the butternut pumpkin is taking over the world and has to be discouraged from climbing through the fence into the next door neighbour's back garden;  one of the runner bean plants has finally flowered (very pretty flowers) but the others are still just sitting there doing nothing; and some of the onions are probably ready for harvesting.  The courgettes died.  We've had a few sprouts from one of the sprouting broccoli (the other will sprout in early spring).   The tomatoes have run wild and needed staking (some are supported on bricks); there are dozens of green tomatoes appearing but it's been so wet recently that I'm beginning to worry about blight.    I've reused one of the potato tyres to grow pak-choi; they're about an inch high at present.   There are about a dozen chillies visible now, spread over three plants and, on Tuesday night, we cooked with and ate our very first jalapeno chilli.  Yum!

I'm beginning to plan for next year's garden.  I want to try over-wintering broad beans, which means planting them out in October. Ditto garlic and shallots.  I'd also like to try growing beetroot, having finally overcome a beetroot-canned-in-vinegar-induced aversion to them.  Not sure what else to grow.


And finally, we're part way through this year's attempt to make rosehip jelly, having harvested 5kg (11lb) of rosehips from the rose bush in the front garden.


SOCKS  Completed another pair of the zig-zag socks, this time for me.  The Mirasole yarn didn't knit to the same tension as the pair I made for my sister, which I found out the hard way (I grafted the toe shut on the first one, tried it on and discovered that they were far too short in the foot).  Hands up any frequent sock knitter who does a gauge swatch on a pair of socks for themselves.  <--stands on toes to look at the back of the room-->  No, can't see anyone. <--shakes head--> Since the yarn can pass as DK, this pair were meant to be my catch-up pair, with another pair to follow.  However, the subsequent pair were only 40 rows long at month end.