Standing on the hallowed turf at Lords

It wasn't for cricket - let's face it, I'll never bat for Middlesex - but here's proof that I've stood on the outfield at the home of cricket. 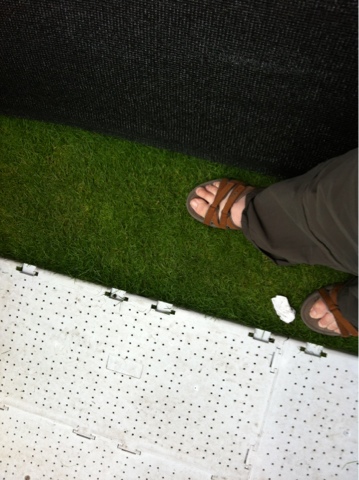 Posted by PipneyJane at 14:09 No comments: 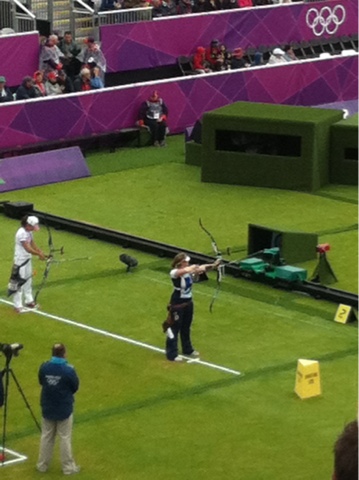 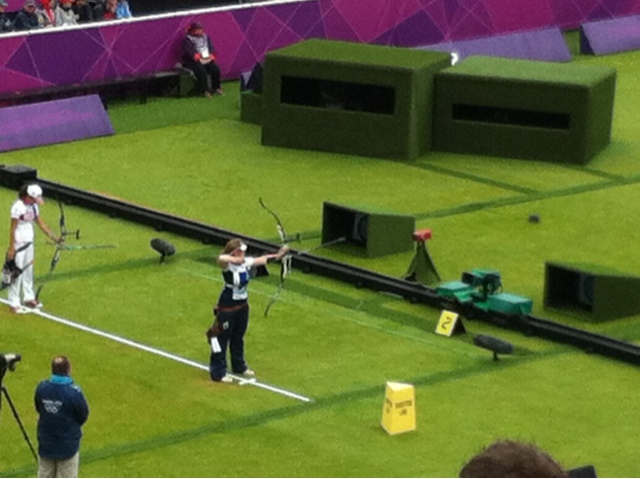 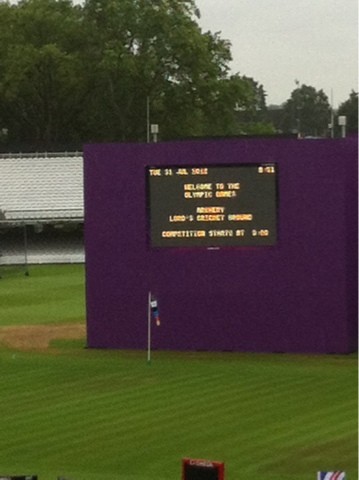 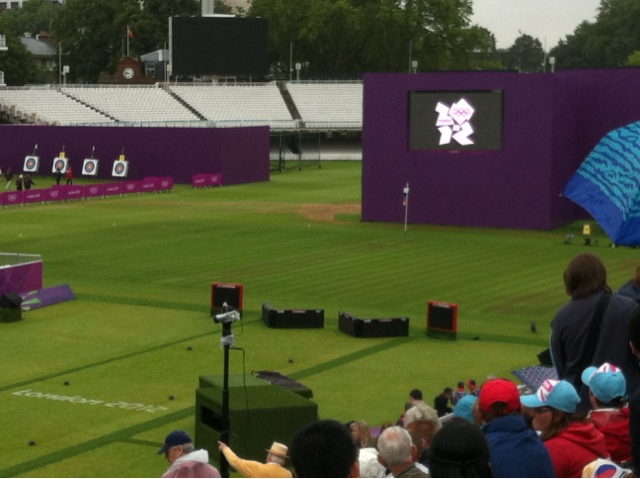 Ever the optimist: at the Olympic Archery at Lords, wearing sandals, trousers that convert to shorts, a strappy top, cardigan, leather jacket and a rain poncho. 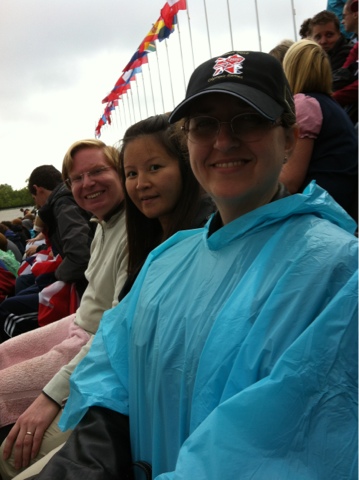 Posted by PipneyJane at 09:32 No comments:

Knitting at the Olympics

Tonight, my knitting witnessed Senegal beat Uruguay 2:0 at Wembley. In a few minutes we'll see Great Britain play the UAE - a great evening of football at the Olympics. 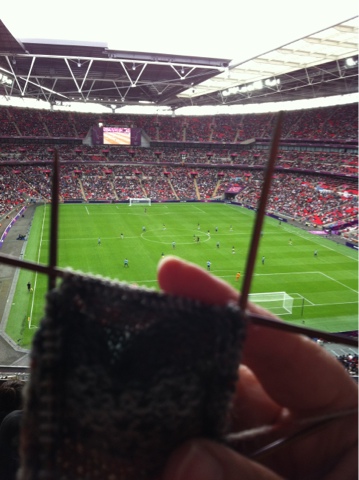 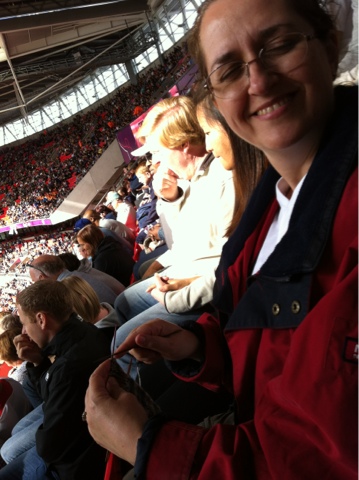 Posted by PipneyJane at 18:21 No comments:

Did you watch the Opening Ceremony last night? We watched it from the start at 9pm to the finish at 1am.  What did you think?  Didn't Danny Boyle do us proud?  I thought it was brilliant!  Absolutely brilliant!  Nothing twee or cringe-making.  The segment when the LSO played Chariots Of Fire and Rowan Atkinson did Mr Bean had me in stitches.  (And I don't like Mr Bean.)  I also loved the sketch where "James Bond" turned up to escort the Queen to the Opening Ceremony.  It proves HMQ has a sense of fun.

When you think that most of the performers were volunteers, they should be really, really proud of themselves.  Professionals could not have done better.  The team of staff and patients(!) from Great Ormond Street Hospital were just amazing. Most of those children have chronic, long-term illnesses and here they were, centre stage at the biggest show on earth.  Their faces lit up the television screen.

Danny Boyle didn't shy away, either, from being subtly political.  The message "Hands off!  Leave our NHS alone!" came through loud and clear.  As did the statement about honouring our armed forces and our war dead.  And the tribute to the victims of 7/7.  What other opening ceremony has had the Secretary General of the United Nations as an active participant?    Messages received loud and clear, Mr Boyle.  Well done!  And thank you for making them.

My first Olympic event was actually on Tuesday, when I sang in the Torch Ceremony in Ealing.  The choir had to be there from 2pm for the sound check.  It was stiflingly hot. We were lucky, though - they gave us a spot under the trees, right beside the path for the torch. 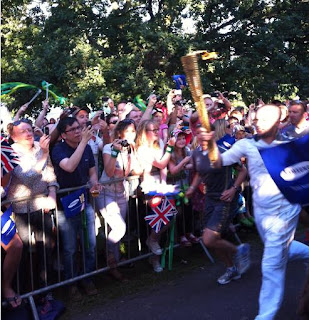 About two minutes later the cauldron was lit and we sang the closing number, appropriately called "Olympic Torch".  It was a medley of pop songs that finished, naturally, with "We are the Champions!". 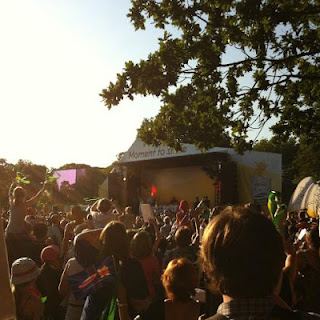 Sadly, the cauldron was extinguished within a couple of minutes of the end of the show, so I couldn't get a close up of it aflame.  Within 15 minutes, the crew had started to dismantle the stage, in order to move it to the venue for Wednesday night's show.  This is the best I could do: 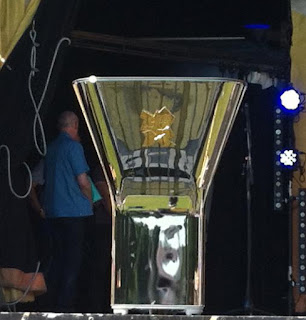 My next Olympic event is tomorrow.  We have tickets to the men's football at Wembley.  As luck would have it, we get to see Team GB play.  Hope they do better than their opening match.  Tuesday, we will be at Lords for the archery and next Saturday (4th), we're back at Wembley for the men's football semi-final.  Sadly, we don't get to the Olympic Park proper until the para-Olympics, for which we have tickets to the athletics, cycling, equestrian events and the rowing.

Sorry, Interweave Knits, but you lost me

I am writing to tell you why, after a period of 6 years, I will not be renewing my subscription to Interweave Knits. It's definitely you, not me. The "new" layout that you've been using for the last couple of years is a total turn off. I lose the will to live while flipping through the pages to find your patterns and, when I do find them, they just look like more advertising. The patterns don't register in my mind. I can't remember a single occasion over the last year when I opened your magazine, saw something I liked, and thought "I want to knit that". More commonly I'll see something on Ravelry, look at the details and then be surprised that I didn't recognise it since it came from one of your recent editions.

This is the third layout you've had in the time I've been a subscriber. I cannot understand why you think regularly changing the layout is a good idea. You had a layout that worked just fine but you just couldn't stop messing with it, could you? Is it because, each time you get a new editor they have to put their own "branding" on the magazine, like CEOs who rebrand companies to make their mark? It makes no sense to me. If it ain't broke, don't fix it! As well as your magazine, I've been a subscriber to Vogue Knitting for well over a decade and have copies dating back to the 1980's. Throughout that time, their layout has remained constant: advertisements and editorial at the front; followed by pattern stories; and then the pattern instructions. If consistency works for Vogue Knitting, why doesn't it work for you? It works for your sister magazines, Knitscene and Interweave Crochet, who have had the same layout for as long as I've known them.

The other thing I find annoying with you is that you do not include your regular "special issues" in your subscription price. Every year, you publish Interweave Knits Accessories and Interweave Knits Holiday Knitting - don't you think your regular, overseas subscribers would like to purchase them too? If we want a copy, we have to pay DOUBLE the cover price in P&P. It's not as if you don't know you're going to produce several special issues a year - given your lead times, you'd have to schedule them at least a year in advance - so why don't you include them in your subscription? (You used to do this with Knitscene but finally saw sense and created a separate subscription-type scheme.)

It's reached the point where I dread opening your magazines and your emails (Knitting Daily). That is not good.

Silence.  Did I ever tell you how much I appreciate odd moments of silence?  There is so much noise in our lives:  radio, television, the neighbours, traffic, stuff on MP3 players.  Sometimes, it is only when the noise stops that you can hear yourself think or listen to the wind in the trees or the birds in the garden.

Silence, is also relative.  In the background, right now, I can hear our new washing machine whooshing away quietly.  The last one shredded a bearing back in March and gradually got louder and louder on the spin cycle.  When I called him out, our marvelous washing-machine-repair-man told me that it wasn't worth fixing because the parts would cost almost as much as a new machine, but that we could run it until it died, which might take several months and be a bit messy at the end.  His solution to the noise was "Close the kitchen door".  (For his honesty and that call out, I paid £15.)

A week ago, we decided that enough was enough.  While it still worked, the old machine was deafeningly loud.  A quick trawl on the internet and two shop visits later, we'd bought an almost-like-for-like new machine:  7kg capacity; separate temperature control (so that you can run every wash on cold water - as we do - if you want that facility); handwash woolens cycle; everything mechanical, with no mother-board to go expensively wrong.

It arrived on Friday and was immediately plumbed in and tested.  It is so quiet.  For the first time in months, I can be in the kitchen during a spin cycle without risking hearing damage.  In fact, when a wash finished a few minutes ago, it took me a while to realise it had stopped!  It is that quiet.  Near silence is indeed appreciated.