(Or what a little red car did on his holidays.)
Two Monday's ago, I got loaded up with people and stuff and drove to Normandy, France.  I had my "passport" (GB sticker). 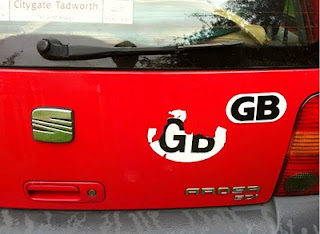 My ticket (attached to my rear vision mirror). 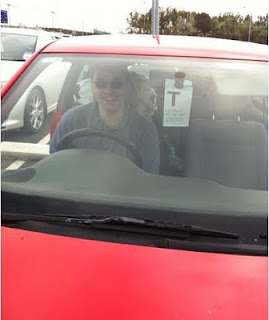 An awful lot of luggage. 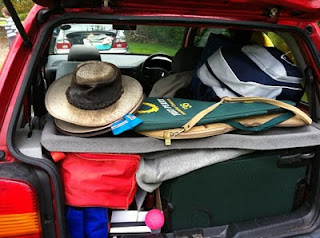 Yet more luggage.  (How much do three people need for one week?) 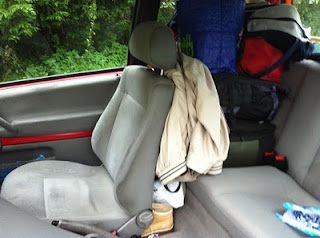 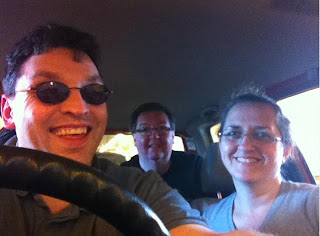 We travelled via the Channel Tunnel, on Le Shuttle.  It's quicker than the ferry and much more comfortable if you're a car - no need to worry about some idiot belonging to the vehicle next to you flinging his door open and damaging your paintwork.  And, no possibility of sea-sickness.   Also, the humans have to stay with their vehicles on Le Shuttle, whereas on a ferry they're forceably removed and made to walk through shops stinking of foul smelling perfumes (which always clings to their clothes.  Yuck!).

If you've ever wondered what the inside of the Channel Tunnel looks like, here's a "car's eye view" of the interior of the train: 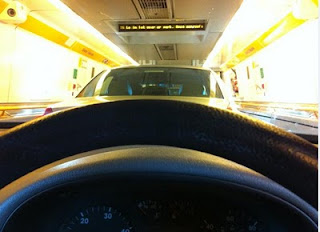 When we got to the far side, the Boy drove me into Cite Europe for a rest, while the crew went to the bank, bought lunch in Carrefour, stretched their legs and swapped drivers (the Girl did the next stretch).  Cite Europe is a shopping mall right beside the Eurotunnel terminal.  Must remember for next time that the quickest way to get there is to drive into the Total garage forecourt, then back onto the side road, left at the roundabout and into the car park 200 metres beyond.  Otherwise, you have to go the long way round via the motorway and that means adjusting very quickly to French roads.

French roads are a bit strange for us right-hand-drivers.  Firstly, we have to remember to drive on their side of the road, not ours, and that means going around roundabouts the wrong way. 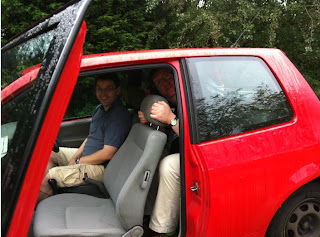 See, the Boy is sitting in my driver's seat.  It's on the other side  to all those left-hand-drive cars.  He had to drive sitting almost in the gutter on some roads.  Also, it means we have to wear "blinkers" so that our lights don't blind the on-coming foreign cars. 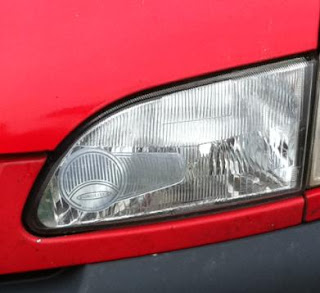 (Do you see that THING stuck on my light?  That's a blinker!  Like horses wear!  As if I'd ever deliberately blind someone.  How insulting!)

Driving in France means different speed limits and having to remember to pay attention to the kilometres on my speedo, not the miles.  On their motorways, cars drive up to 130km/h (that's over 80 mph), while in  towns the speed is usually 50km/h (around 30mph).  On the whole, their roads are good:  well signposted, smooth surfaces with not many potholes.

Although some cars got a little too close to my rear bumper for my liking, most were very well behaved - only staying in the left lane for long enough to overtake a vehicle before pulling in.  And they indicated (unlike London drivers who think that using their indicators costs extra).  I soon got over my nerves and was whizzing along pretending that I'm really a Porsche in disguise.  Then we got to the Pont Du Normandie. 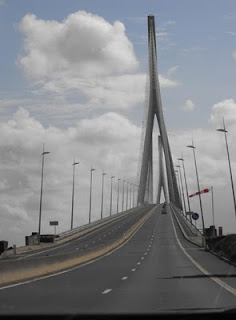 No photos can do it justice.  That bridge is steep.  Since it has a peage (toll booth station) at the bottom, you can't even get a good run-up.  It even has pedestrians.

We drove from there to Pegasus Bridge, near Caen.   The British captured the Bridge on the night before the D-Day landings.   I drove over the replica/replacement.  It looks the same but it's larger and stronger than the original. 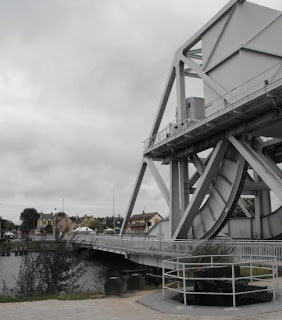 It was named for the emblem of the Paratroopers who liberated it.  Their story is told in the film, The Longest Day, starring Richard Todd.  In real life, Todd was one of the reinforcements on the mission. 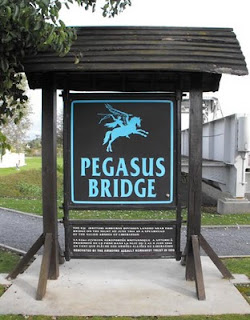 The original bridge is now in the museum beside the canal.  The first allied soldier to be killed by the enemy during the D-Day landings,  Lt Brotheridge, died on that bridge.  There is a plaque to mark the spot.  Someone had left fresh flowers there on the day we visited.

The humans tell me that, if you get the chance, the museum is well worth a visit.  As well as the original bridge, it also has a replica of the Horsa gliders the men flew in to capture the Bridge.  (The originals didn't survive the conflict.)

The replica was built by engineering enthusiasts to the original plans.  It's mainly made of plywood.  Must have been a scary flight, not much in the way of brakes or steering and no engine.
From Pegasus Bridge, we continued on our way into the heart of the Normandy peninsula, to the farm house where we stayed.  We visited shops and markets, etc, but  I think I'll leave the rest story to another day.  Time to park up my wheels and rest.

We're on holiday in Normandy for the week.  On Tuesday,  we visited the American Cemetery Normandy, high on the bluffs over Omaha Beach. 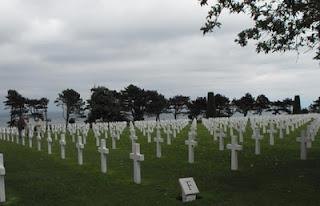 It is a peaceful but windswept place.  The edge of the cemetery looks down over the dunes and cliffs onto the beach.  While there couldn't be a more fitting place for the American cemetery than the bluffs over Omaha Beach, it is amazing that anyone survived. Looking down, you wonder how anyone could have made it off the beach alive.

Standing on the beach, you marvel at the peace and the lack of ghosts, after the horrors that were the D-Day landings.

We weren't alone at the Cemetery.  Everywhere were small groups of people come to pay their own respects.  One was a small party of veterans and their wives doing a wreath-laying ceremony at the memorial.  Their shoulders had that certain stiffness people have when they're trying not to show they're crying.  (We didn't photograph them - that would have been intrusive, but you can see their wreath in the photo below.) 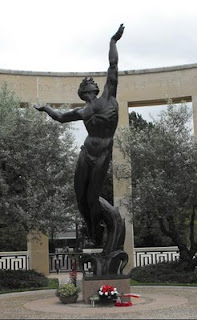 We were there to pay respects of our own. The great-uncle of a friend, Amy, is buried there.  He died on D-Day, 6th June 1944, a young man who gave his life and his future so that Europe would be free of the tyranny that was the Nazis. 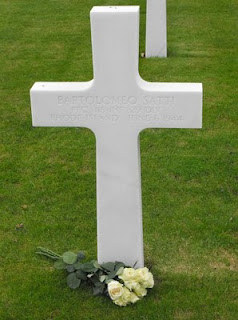 Putting flowers on his grave is the least that I could do, Amy. 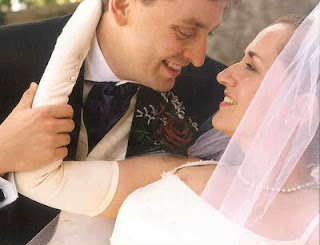 Eight years today.  And every day is wonderful.

On Friday, I finished my latest pair of Prom Socks and decided, reluctantly, to give them to a friend for her birthday. 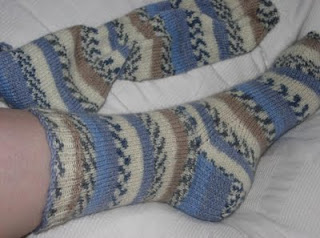 They're in Regia Marrakesh, colourway Sylt 5497.  I really like it.  In fact, I liked it so much that I decided to buy another ball, to make a pair for myself instead of just making a pair of Use-Em-Up socks with the leftovers from this pair.

About 10 minutes after I finished the socks, I was on-line searching for a replacement skein.  Google to the rescue. There weren't many options listed, so I felt really lucky when I found a skein at the very yarn shop who owned the stand at Ally Pally where I'd purchased the ball in the first place!  Web of Wool.

An alarm bell chimed softly in the back of my mind when I saw the website address.  It wasn't the store name, but the website looked legitimate so I rationalised that maybe they were using a hosting service.  Everything went well, including the "thank you for registering at our website" email, until I tried to pay for my purchase.  Then I got an error message from WorldPay:

Since it was after 10pm, I thought that maybe the site was down for maintenance.  Just to be sure, I emailed Web of Wool to report the error message by replying to the "thank you for your order" email I received from them.  I also emailed the Hotmail address quoted on the website.  When both of those bounced, I tried the "Contact us" page.  That didn't bounce. I hadn't paid anything - I hadn't entered my payment details anywhere - but I didn't want that ball of yarn sold out from under me.

I was a bit concerned that I didn't hear anything from them on Saturday or Sunday, so this morning I tried to phone them.  The number was disconnected.  Huh?

Back to Google.  This time, my Google-fu turned up a discussion on a knitting club's board.  It was nearly two years old but talked about poor customer service, non-delivery of orders after the money had been taken, unanswered emails and non-returned phone messages.  The writers talked about reporting Web of Wool to Trading Standards. I posted on the Midlands UK Crafter's Board on Ravelry:  has Web of Wool closed?  A kind Raveler responded and said yes.  She linked to the forums on the Laughing Hen website.  And there I got a definitive answer:  Trading Standards had taken Web of Wool to court and got a judgement against them; effectively, they closed them down.

It looks like I dodged a bullet, since I hadn't paid any money or given any payment details, I'm not out of pocket.  Beware, though, if your search for a yarn shop turns up this website for Web of Wool, it's an archive and not functioning.