They took my Toy car away on Tuesday. I'd spent what-felt-like days caught up in the insurance-company-telephone-death-spiral. Net result: he was written-off and taken for scrap. When the drove him onto the transporter, I seriously wondered if I was doing the right thing - it felt like a betrayal.

This is his last ever milestone.

Goodbye Toy and thank you for all the great times. 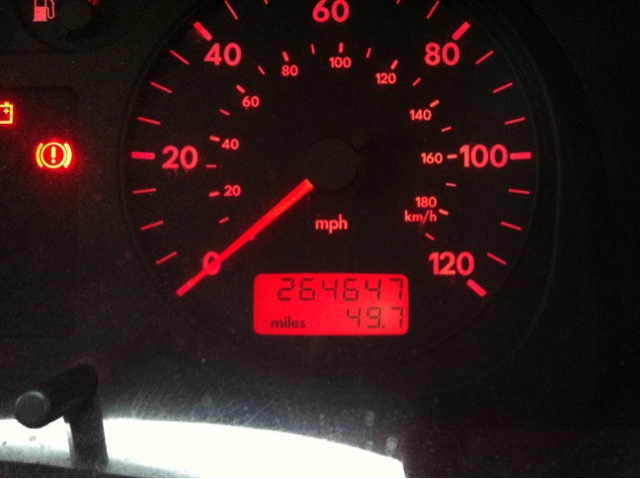 The Toy is No More

My Toy car just got written off!  He was parked up on the street opposite our house and one of the teachers from the neighbouring school just drove straight into him.  Head on collision.


Smashed headlight.  Smashed grill.  Punctured radiator.  Damaged bumper-bar.  Too old and too many miles for it to be an economic repair (264,500 miles on the clock and 12 years of service).   The insurance company have told me to remove all my personal belongings and they'll arrange for a salvage company to take him away to the big scrapyard in the sky. 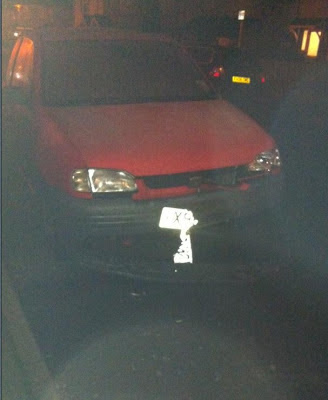 I'd spent today home sick and was lying on the couch under a duvet when I heard the sound of glass smashing followed by car crash noises.  Looked out the window and saw a car with its hazards flashing.  Looked for the Toy and realised he was 15 feet or so down the road from where I'd parked him on Monday night and not looking healthy.

Now I'm going to have to spend the next few days finding and buying a new car.  Not what I'd planned to do but commuting to work by train is not a long term option either economically or time-wise.  As it is, I'm going to take the rest of the week off sick because I'm certainly not well enough to face that train journey.  And I may work from home for a few days next week.

PS:  The driver of the other vehicle is OK.  A bit shaken but not hurt.
Posted by PipneyJane at 20:14 1 comment:

As mentioned in my New Year's Day post, I've been toying with the idea of implementing some type of WW2 wartime experiment.  (I first mentioned the idea in this post back in October.)  So far, what I've decided to do is Fashion on the Ration.   Anyone willing to join me?

The 1941 clothing ration was 66 coupons, which had to cover everything:  underwear, stockings, socks, hats, shoes, skirts, jackets, shirts, trousers, coats, knitting yarn, etc.  The idea behind the ration was that it would enable everyone to buy one new complete outfit per year, nothing more, nothing less. Second hand items were exempt. 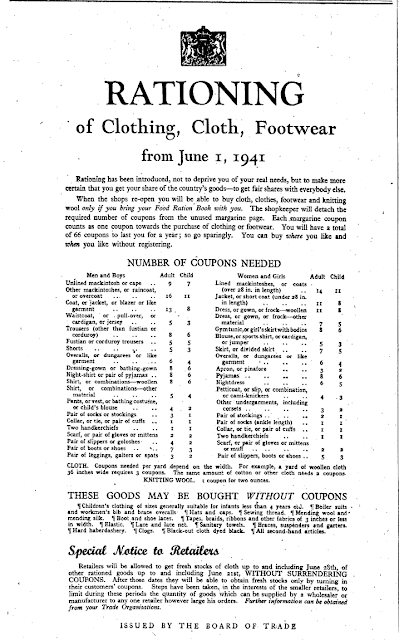 Government announcement in the Times, June 3, 1941

Assumptions for the challenge:-

Examining my wardrobe-crystal-ball for 2013, I know that I'll need to acquire at least the following:-
So that's 44 or 45 coupons spent before I consider t-shirts, blouses, jeans, knitting yarn, etc.  Hmmm......

Labels: Fashion on the Ration, WW2

PS: I agree with Dilbert

Posted by PipneyJane at 10:20 No comments:

My first lie-in of 2013 ended at 7.52am when, after 6 hours sleep, I gave up trying to go back to sleep, got up and went and had a shower.  If the start-the-New-Year-as-you-mean-to-go-on brigade are to be believed, my 2013 will consist of a lot of early starts and not much sleep.

On the whole, I think I didn't do too badly.  How did you do with your New Year's Resolutions from 2012?

Highlights of 2012 were the trip to Oman, my sister's visit, the various concerts I performed in, the Last Night of the Proms, the Queen's Jubilee and the Olympics/Paralympics. DH is working at a job that stimulates his mind instead of just paying the bills (and enjoying every minute, as far as I can tell).  On Ravelry, I participated in the Ankh-Morpork Knitters Guild Guild Wars 2012, competing in every round. Workwise, I have a new job title at work ("Finance Manager") and a new reporting structure, but my job hasn't really changed.  It's just got more complicated.

I am not proposing to set many goals for 2013.  I know, earlier this year, I toyed with setting a Wartime Experiment challenge for myself, but I'm not sure I'm up to it.  Anyway, this is my list so far:-
Happy New Year everyone!!!

Posted by PipneyJane at 10:05 No comments: