(I have been stewing over this for the best part of 10 months.  I think sufficient time has elapsed, now, to tell you all about it.)

Just before Christmas, I met up with a group of girlfriends for our annual Christmas Night Out. We are a group of five successful women in our forties. I was late and flustered (got held up in traffic) but within five minutes of my arriving, it turned into the female equivalent of a pissing contest. One woman (I'll call her TopDog) had to be better/a bigger martyre/a saint/more successful/bigger-spender than the rest of us. Whatever it was about TopDog had to win the comparison contest. My favourite episode from that evening was not long after I arrived, when the others were commisserating with me about my journey: TopDog announced that she'd had the furthest to travel to get to the restaurant, which was blatently untrue. "No you haven't", I responded, "I've just driven in from Reading, which is 40 miles away. You've only come 20 miles". If looks could kill, I'd be pushing up daisies.


The evening deteriorated from that point onwards, with TopDog demanding admiration and to be the centre of attention at every turn, making more and more outlandish comments just to get a rise out of people. (Seriously? Why else declare that your latest, uncircumcised partner was so much more sexually stimulating than your previous circumcised one simply because he has a foreskin? Who cares?) At one point, late in the evening, she even started a sentence irrelevantly with "Well, speaking as the only mother here....", which was designed to be a dig at me (several rounds of infertility treatment) and at another friend (I'll call her Placator) who is also not childless by choice. I demanded to know "And that means what exactly? What are you really saying?" and got no answer.

The worst part of the evening, though, was the half an hour TopDog laid into Placator bullying her, criticising her for her lack of love-life and for not wanting to date anything in sight. The rest of us sat there speachless. It was a horrible, nasty thing to do. We tried to change the subject and it kept coming back, time and again. I couldn't think of a thing to say to stop her. Eventually, one of the others said, "Friends don't try to "fix" friends," to which we all agreed and that finally changed the subject. (Honestly, I nearly accosted a total stranger in the Ladies Toilet to ask her what to do. I was at my wits end.)

I drove home that night fuming with anger. Still feel it now. In the morning, I sent Placator a text message apologising that I hadn't stood up to TopDog on her behalf. When TopDog sent out an email saying "That was fun! Must do it again!", I replied that I hadn't enjoyed the evening and that I though she owed Placator an apology for laying into her for half an hour. My exact words were:

Personally, I didn't have a good night. I didn't enjoy what I witnessed. You obviously have no idea how hurtful you were being last night. You laid into xxxx for nearly half an hour. In that entire time, I'm surprised she only came back at you with one snarky remark. And she immediately apologised for it. Sorry, but I think you owe her an apology. You need to learn when to stop.

The response can be summarised as: "F.... Off. And don't bother to contact me again.". At which point I congratulated myself for saving myself a Christmas card. When I talked to the others, the response I got was largely positive. It needed to be said. And I'm glad I won't have her in my life any longer. You know when someone is a good person and a good friend when go to their wedding/birthday/family celebrations and see how many of the people there have known them for years - looking back at the time I've known TopDog, she has virtually no long term friends other than the girls who were at that meal. Says a lot really.

My only regret is that I didn't tell TopDog to stop. I was brought up to believe that I should stand up for the defenceless and shouldn't stand by when someone-else is in trouble. And that includes standing up to bullies like TopDog.


Life is too short to worry about the TopDogs unless one is unfortunate enough to be on the receiving end of their attentions. I hope you have managed to escape such nastiness.

It is not often that the sight of something reduces me to tears.  This did. 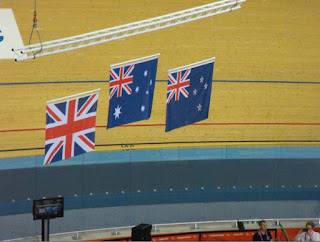 It was the women's tandem cycling medal ceremony that did me in.  Earlier, we'd watched the final and the race-off for third place, and cheered and yelled and (probably) deafened the cyclists. 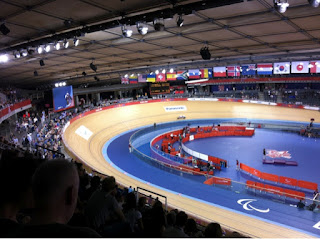 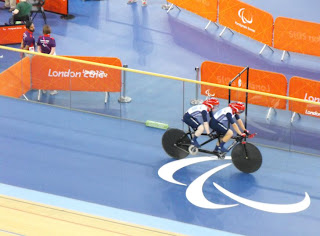 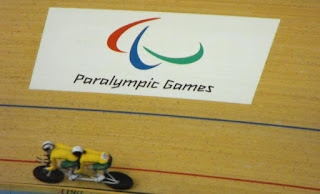 The results were put on the board. 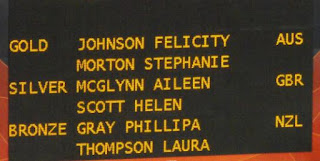 The girls were presented with their medals.  We all stood to attention and faced the flags.

As one of the small contingent of Aussies in the audience, I sang my national anthem and, then, it happened. There I was, in the middle of singing Advance Australia Fair, tears streaming down my cheeks, trying not to sob.

We witnessed all sorts of greatness that day.  And on the next three days.  The triumph of the human spirit over adversity.  While the Olympic athletes are correctly feted as amazing, talented individuals; it's the Paralympians who are a step beyond.  They are the true heroes.

In the Olympic Stadium on the Saturday night, we witnessed four world records fall and several Paralympic records, including Oscar Pistorius breaking his own world record in the T44 200m heats. 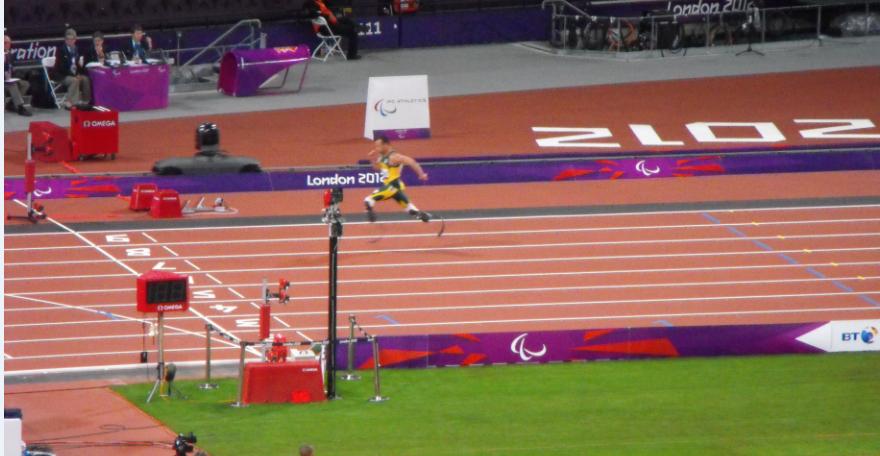 The stadium was amazing, but there were so many events going on that it was hard to keep up. 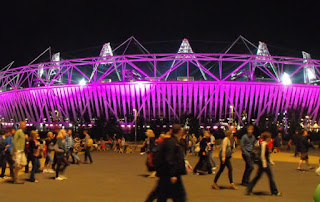 Is it enough to say that we were there?  We were their witnesses?

This was taken  at the rowing, when it was cold and wet, with that horizontal, floaty rain that only seems to exist in these islands and which the Irish call "soft weather". 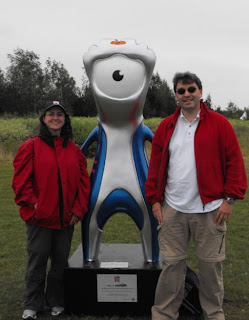 We witnessed the heartbreak of a Spanish rower who, paralysed from the waist down and strapped into his boat, was leading his race by several lengths when the velcro on his strapping gave way, less than 100m from the finish.   Following frantic efforts to re-strap himself in, he came in third. 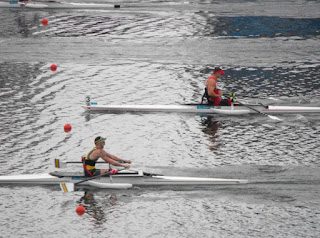 If the audience had had a choice, we would have given him a special gold medal for his heroism and courage.

How can I adequately describe the Paralympic Dressage?  We witnessed the Individuals Competition at the "Costa del Greenwich".  (It was so hot and sunny, my legs actually took on colour!) 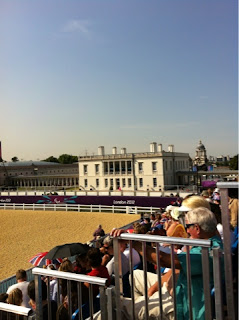 Against the most amazing backdrop, we witnessed miracles.  Men and women, often with limited - or no - muscle control below their waists, controlling huge horses by the touch of their fingers.  And making them dance. 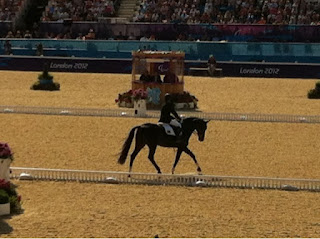 Seriously, there were horsemen/horsewomen who were only upright because they used special saddles - bouncing around like a sack of potatoes whenever their horses trotted - often with limited movement in their hands and arms, and they made their horses dance by the sheer force of their willpower.

They are the true heroes.  We, their audience, are not worthy to breath the same air. 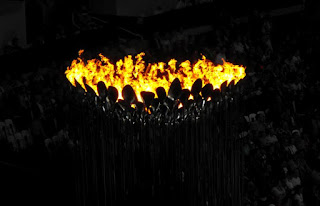 Posted by PipneyJane at 11:27 No comments: