The best birthday present ever?

If you had a sporting fantasy, what would it be?  For many of my friends, it'd be to score the winning goal for England in the final of the World Cup.  For  a few others, it'd be to score a century in an Ashes test match and then take five wickets.  For me, it'd be horse related:  riding at Hickstead or show jumping at the Horse of the Year Show or doing a National Velvet and riding the winner of the Grand National.

When I was trying to figure out what to buy DH for his 40th birthday last year, I wondered what his would be and whether I could give him a gift that would fulfil it.  I don't know what his was, but I can make a good guess what it is now. 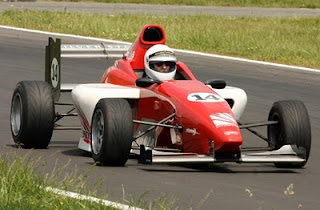 On Sunday, DH "spent" his 40th Birthday Present:  a Formula Silverstone single-seater "driving experience":  20 minutes driving a racing car around one of the circuits at Silverstone, the home of the British Grand Prix.  He had a ball!  I lost count of the number of laps he did, but he loved every minute of it.   You can't see the smile on his face in the photo above, but I assure you it was there.

There were 18 drivers in DH's group.  His session started with a short (20 minute) briefing about how to drive the track:  when to brake, when to change gear, what is the best line to take through the bends.  That was followed by a short "how to operate the car" briefing session in the pit lanes and then he was helped into his vehicle by a member of staff, who also went over the vehicle's controls.  The cars were led out in groups of 6; each group had its own safety car.  The safety car led them round the track at ever increasing speeds, before setting them free to race each other around the track for 10 minutes.

I'm really glad he loved it.  I chose it for two reasons:  it had the longest driving time of all the Red Letter Day driving experiences on offer, and it's something that appeals to me, which I thought would appeal to him too. Score 2:0 to me.

In the things I wish I could remember department:

I wish I could remember how to reset the clock on the stove.  (Or, alternatively, what we did with the manual.)  I'm sure I used to know but it isn't intuitive and it's been 7 years since there was power to the clock and ovens.  (We used the gas hob.)  The electrician has wired it up temporarily for us and I've used both ovens, but I'd really, really like to set the clock to the correct time.  I've emailed the manufacturer - fingers crossed they can help me.

Have you been watching the World Cup?  Yesterday was a rather nail-biting day for me.  I'm cursed with having two national teams to follow:  Australia and England.  England needed to win to progress to the knock-out stages.  If Australia were to progress, they needed both a big win (with a goal difference of 3 or more) AND either Germany or Ghana to win the other match in their group.

The canteen at work has been showing all the daytime matches on their big TV.  The England match was at 3pm so a group of us went down to watch.  (By the end of the match, there was 200 people in there.)  It was nerve-wracking!  I think I swore more in those 90+ minutes than I have ever sworn in the office.  Fortunately, England played like a team, defended well and won by a goal to nil. It was the best they've played in this competition - their match against the USA was OK but they looked nervous, while their game against Nigeria was dire.

Australia's game was at 7.30pm and not broadcast on terrestrial TV, so I watched the German game.  It was so frustrating!  I have only managed to watch one out of the three Australian matches and I was hoping to watch this one.  No dice.  We won, with two good goals, but it wasn't enough to go through.

Congratulations to the American team for getting through to the last 16.

Can't remember if I've told you but DH is working a temporary job and has been since the second week of May. It's for a contractor for London Transport, which means that every day is in a different location. It's shift work. The hours are awful.   And he has to get there by public transport so an 8 hour shift is really a minimum of an 11 hour day.  It's not in his field.  But any job is better than no job and he's happy to be earning some money.

Hi everyone!  I'm still here.  Life's been interfering a bit in my plans and I haven't been on-line as much as usual, hence the lack of blogging.  Something similar happened last month, which is why I didn't post a Sit-Rep for April.  However, I decided I couldn't let two months go past without comment, even though it's now the middle of June.  (Hell, if BostonGal can do her monthly updates late, then so can I.)  So here goes....

STASH  Maintained 100% cold sheep, however I feel like I'm cheating since I rarely buy yarn on-line and haven't been near either a yarn shop or a show, so I haven't been tempted.  Knitted a reasonable amount, however, completing the left front of the Brown Cabled Cardigan (Rav link) as well as 2.5 pairs of socks AND ripping out and reknitting the back of the Mohair Cardigan (Rav link) from Verena Knitting.  The socks didn't use up complete skeins - even on the pair for DH I have 20g or so left over - so I estimate that I've used two skeins of sock yarn plus one skein of the Heathland Hebridean (in the cardi) and 1/3 of a skein of the mohair in the last two months. Also DH extracted the stash basket from storage so I've been able to give P's mum the two balls of Artesano Alpaca DK.    That's 5.3 skeins of yarn, for a total of 10.5 skeins.

GARDEN  The garden is a bit of a war zone, with me on one side and the weeds + black-fly on the other.  Since the last update, I've sown/planted out courgettes, jalapeno chillis, tomatoes, yellow bell peppers, runner beans, butternut squash and rocket. Most of them are in containers or grow bags beside the back door.   I'm currently raising five pak choi seedlings, which I hope to plant out in a week or so.  Harvested the first broad-beans on Sunday.  I'll freeze the rest, when they're large enough.  I watched Alys Fowler's Edible Garden on the BBC and was impressed enough to buy the book.  It's well written, detailed and answers the sort of questions that aren't covered in other gardening books, things novice gardeners (like me) need to know but can't find the answer to.

FITNESS  Very little to report.  I'm attending yoga and pilates classes when I'm in the office.   Haven't been near Weight Watchers and don't know if I've lost any more weight.  Oh, and I still haven't run a step.

SOCKS  Completed DH's Weird Science socks.  I don't have photos yet, but when I do I promise to include one showing the pattern on the back of the leg - it's different to the front of the leg and was not shown in the pattern.  (I don't think he's worn them yet, although he says he likes them.)  The Zig-Zag socks were a big hit with Eldest Sis and I completed a pair of self-striping socks for myself.  Don't think I'll be able to produce a pair of socks in June - it's half way through the month and I haven't started any yet.   I'll do a separate FO show-and-tell post this weekend.