No, it’s not Lucky Car.  (He’s far too important to be considered “a toy”.). It’s my 2016 iPhone SE.
Why is my phone my favourite toy?  Besides being a phone, it’s  an entertainment device full of books, podcasts and audio-books, a digital radio and a portable TV (thanks to BBC iPlayer).  It’s my camera.  I can use it to talk to my sisters and friends in Australia for free via certain apps.  It’s my backup wallet; forgot my purse?  No problem, so long as the internet is accessible.  It gives me access to my bank, reliable news sources (the BBC and the ABC), my emails and my health records.  It’s the SatNav for the car.  It’s my tutor.  (I learn languages with it via Duolingo.)  It’s the loyalty card and shopping voucher holder for the supermarkets I use.  When I travel, it’s my ticket and my boarding pass, as well as my alarm clock.  I use it for research.  It fits into the front pocket of my jeans and into most of my suit-jacket pockets.  It’s the handiest piece of kit that I own and it’s always with me.
Last night, I was overjoyed to discover that my phone will run on IOS 15, so I can put off purchasing a new one for another year or so.  When I do, it’ll probably be the latest model SE, the one with the “home” button and 126gb of storage.  (I always go for the largest data storage available, since it’s so easy to fill up.  My current phone is 64gb and bursting at the seams with podcasts.)
What’s holding me back from upgrading now?  Well, if you read my last post, you’ll know that I won’t upgrade until I absolutely have to, because it’s a waste of resources.  Also, the new SE doesn’t have an audio jack, while Lucky Car doesn’t have Bluetooth.  Yes, there is a converter/jack you can buy, which will enable you to plug headphones/audio cables into the fire-wire slot but that means I can either charge the phone or plug it into Lucky’s radio, not both.  Not useful when I’m using it as my SatNav and it’s draining the battery.  I hope to find a Bluetooth converter for the radio, which will enable me to do both.   (With the current phone, I can charge it while I drive and listen via the radio at the same time, so don’t risk being stranded somewhere with a dead phone battery.)
- Pam
PS:  My second favourite toy is my 6-year-old iPad Mini 3 together with its Bluetooth keyboard, upon which this is being typed.  I’ll probably replace “Paddy” first because his IOS stopped at 12.8.something, so apps will eventually get more unstable/problematic to use.
Posted by PipneyJane at 07:35 1 comment:

Beyond the Pandemic, one of the biggest themes of the last two years has been Climate Change.  On the one hand, it’s not surprising.  The rising temperatures are finally impacting weather systems, so that politicians and the general public are beginning to notice.  On the other hand, NONE OF THIS IS NEW!  Before I left Australia in 1989, I attended the public session of a conference about the impacts of global warming and pollution.  Yes, 1989!
A word about that conference.  I don’t remember who sponsored it - my flat mate got the tickets - but the session I attended was in the Dallas Brooke’s Hall in Melbourne and it was packed.  The speakers were from multiple universities and research organisations across Australia and the whole thing was conducted via video conferencing from conference halls in the various state capitals.  The items I remember:  the hole in the Ozone Layer; global warming and its impacts; plastic pollution; the damage done by the pollution from bleaching paper pulp with (?) dioxins; power generation - the big issue in Australia at the time was the flooding of the Franklin River for a hydroelectric power plant - and whether nuclear power was worth the risks.  The other thing that I remember being mentioned was how rubbish bins in Scandinavian countries were divided into into sections for recycling.  (When I landed in Denmark in May 1989 - my first stop in Europe - I remember being very impressed. It was 20+ years before Britain caught up.)
Fast forward to 2019 and, somehow, the wonderful Greta Thunberg captured the world’s attention with her School Strike For Climate Change.  All I can say is “good on you girl!  You rock!”.  What bothers me is that, in the intervening 30 years, so many things have got worse not better.  Why are more plastic bottles thrown away now than in 1989?  (Why did sales of bottled water skyrocket in those 30 years and why do people throw away the bottles instead of reusing/recycling them?) Why has the wild bee population declined, when we know how important they are?  Why is 25% of all food purchased by British households thrown away?  Why is it more difficult now to buy toilet paper made from recycled paper than it was in 1989?   Why is there so much litter in Britain and why hasn’t this situation improved in the last 2 years, when everybody was in Lockdown?  (Seriously, you can’t walk down a street now without seeing a discarded face mask.)
On the political side, I guess it all boils down to expediency.  Most politicians don’t think beyond their next election and their desire to be re-elected. Changing “business as usual” practices won’t get them headlines, whereas being seen to respond to disasters will. Sadly, changing “Business as Usual” is what needs to be done to save the planet but it needs some political will.  At the moment, the Government is a follower; it needs to lead and to put its money where it’s mouth is.  Here are simple things the Government could do:-
The above is OK for the Government but what about the rest of us?  What can we do?  In an interview last year, Sir David Attenborough was asked “What is the most important lesson you have learned?”  His answer was “Don’t waste.”  Don’t waste resources.  Reduce.  Reuse.  Recycle.  I’ve been putting my money where my mouth is for years, in an attempt to lower my footprint on the planet:-
I guess my message is:  do what you can, when you can, and try to mitigate the consequences.  Don’t waste.  If there is waste, recycle it responsibly.
- Pam
Posted by PipneyJane at 12:47 1 comment:

As promised in my last post, here are the original grey socks that I finished knitting back in January 2013: 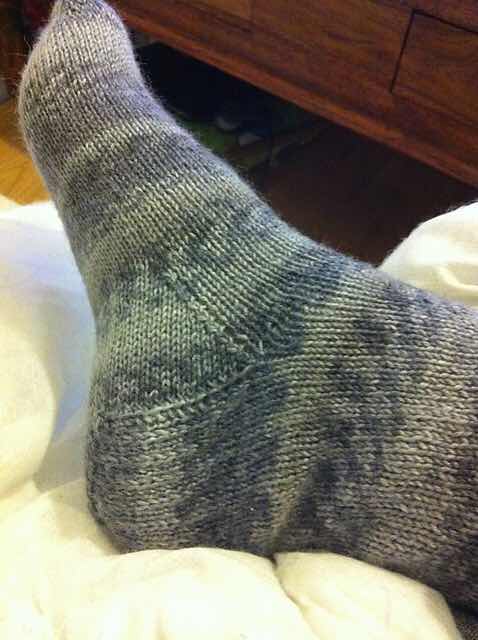 And here are the finished Frankensocks:- 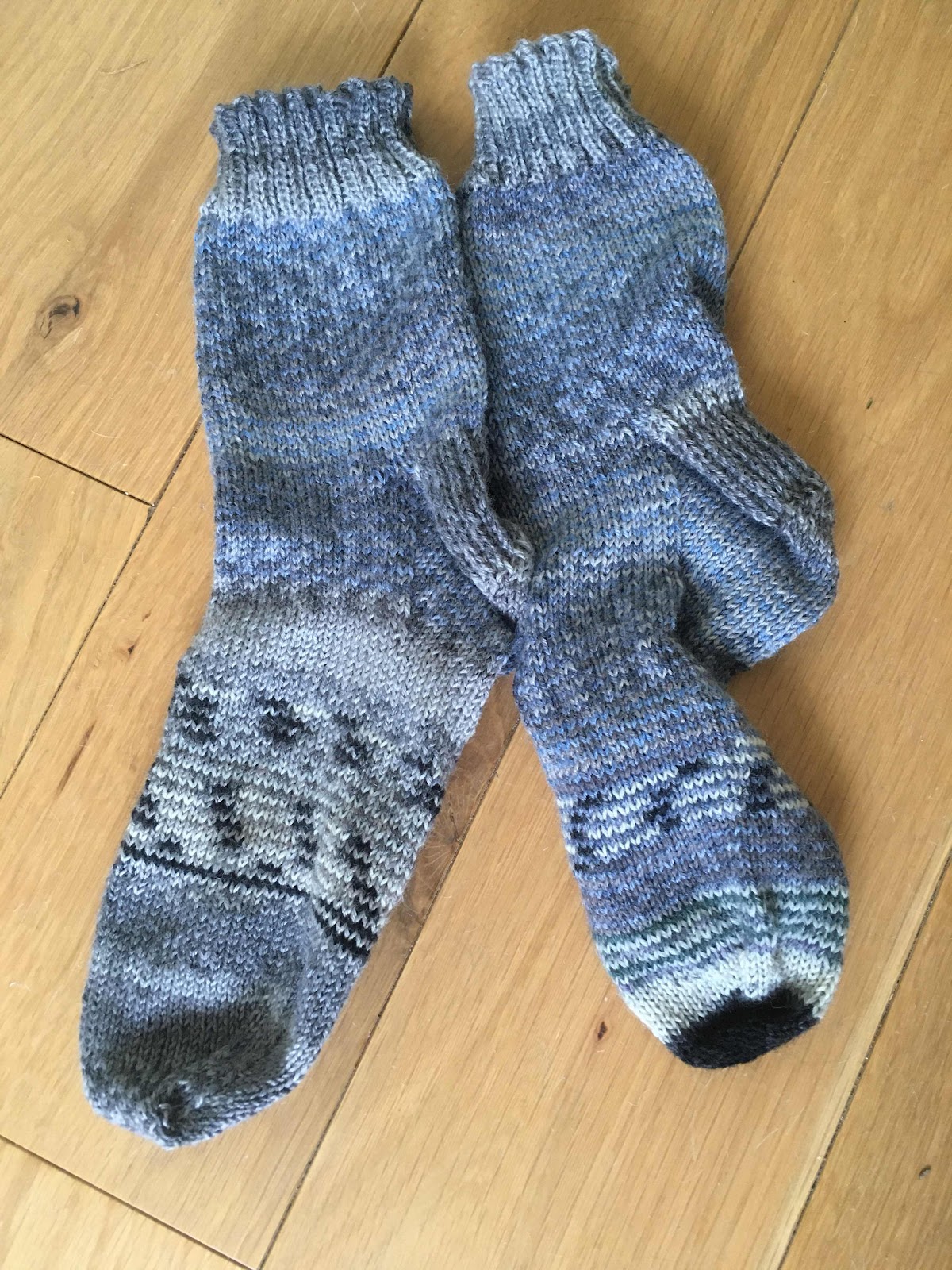 You can see that they’re related.  The third sock yarn, used on the feet, was from these socks: 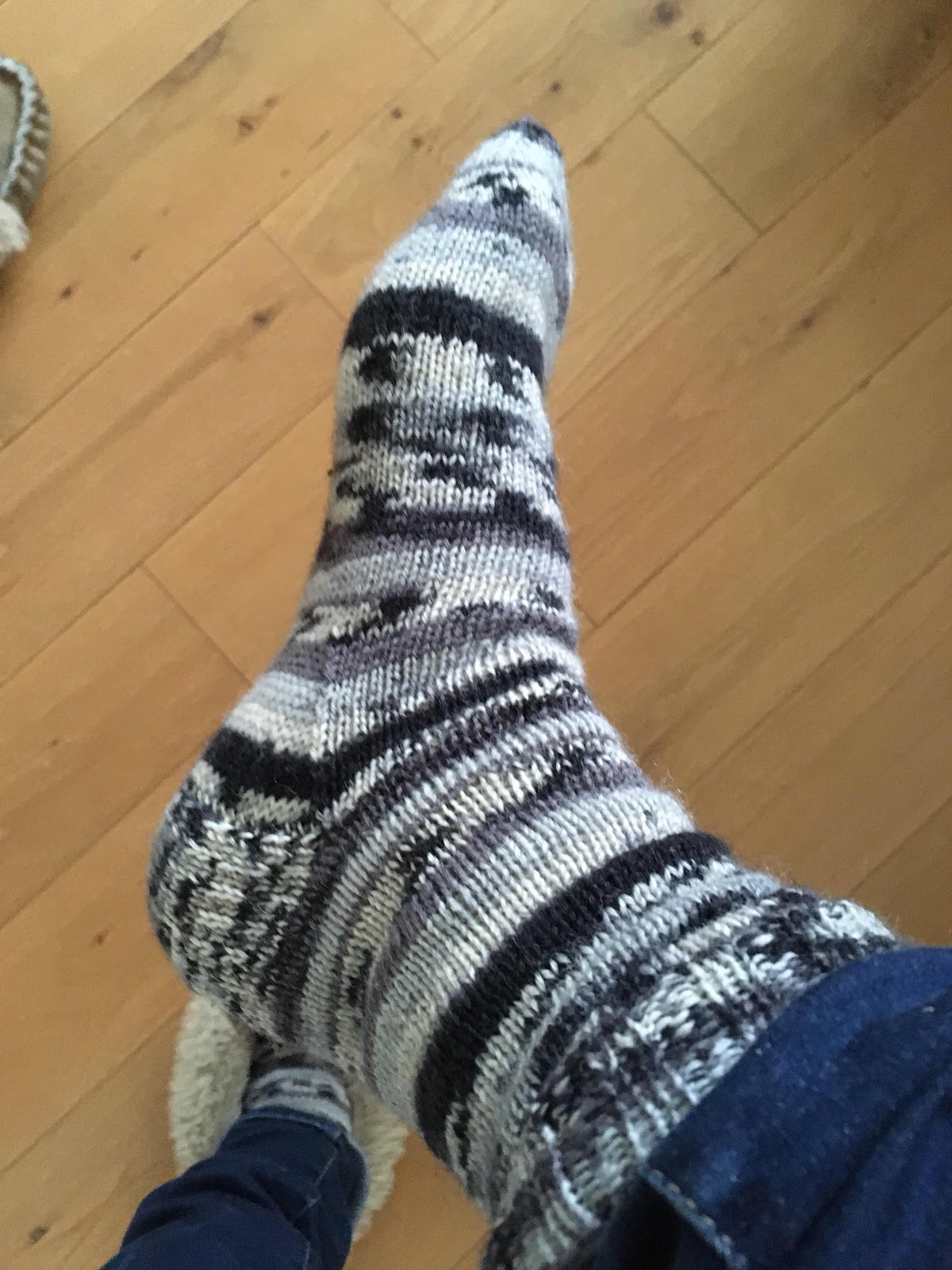 It’s James C. Brett’s Funny Feetz.  (I bought 2x100g balls, back in 2019, and have knitted 3 pairs of socks with it plus this pair.  Their quality control is appalling - one ball was full of flaws.).  On the second sock, I ran out of both colours of the Lang Super Soxx, so ended up working in the end of a fourth ball of yarn, alternating with it for about 10 rows.  No idea from which pair of socks it originated.