There's an App for That

A month ago, I finally succumbed and bought an iPhone4.  It's only taken me 3 (or is it 4?) years.  I think I started my "iPhone fund" when they were first released.  I've wanted a smart phone forever - I like the concept of the multi-purpose device: phone, camera, pocket computer, portable internet access - but the iPhone was something better.  It may not have the best camera or the best battery life, but one big thing makes it market leader.   And the thing that makes it better?  The Apps.

The Apps are Apple's genius.  Anyone can develop an App and sell it through the App store.  And that immediately gave Apple competitive advantage over their rivals.  Want to keep notes on your future projects?  KnitMinder does that.  Need to convert currency?  There's an App for that.   Want to catalogue your novels?  My Library does that by reading the bar-codes on the back of your books.  There are Apps for budgeting, for counting calories, for mapping the route of your morning run.

It was (what?) another year before the competition caught up?  And that involved them adopting a third-party operating system, Android, so that they could offer a large enough customer base to make it worthwhile for developers to create Apps for their phones too.

All this is a long preamble to explaining why I forked out £429 on an iPhone.  I did look at the competition but, in the end, it was one App that swung it in favour of the iPhone, the Weight Watchers' App.  I have been a member of Weight Watchers since 2003, when I lost 28lb for my wedding and kept most of it off for two years.  My weight ballooned upwards when my thyroid started acting up and I feel like I've been fighting a losing battle ever since.  Some of the problems were always having to lug the books around or needing to go on-line to point up foods and recipes or the constant necessity to update the restaurant and shopping guides.  Oh, and Weight Watchers have changed the entire basis of their programs three times since I first bought one of their recipe books back in the 1980's.

As far as I'm concerned, all of those problems have been solved by their iPhone App, which not only replaces all the books but allows you to track your points and your weight both on your phone and on-line.  Unlike the Android App, it fully replicates the functionality of the Weight Watchers website.  (The Android App is only a points calculator.)  Even better, the App syncs with it, so I can point up recipes on the website then find them on my phone to add to my tracker later on (e.g. when I grab a container of mystery lunch from the freezer, defrost it at work and then discover it was beef chilli instead of the curry I was expecting).   Also, I can point up items while I'm walking around the supermarket, which makes it less of a guessing game and easier to choose a sandwich, if I need to buy one.

Why not just rely on their website?  Well, I've been a subscriber for eight years, but this makes it so much easier.  I don't have the hassle of switching on my home PC or logging in.  It's all there on my phone and I can sync whenever I have WiFi access or via 3G.  I didn't need to go to a meeting to pick up the new books or update the restaurant guide, either.


I've been using the Weight Watchers App for two weeks now and lost 5lb in the process.   I haven't eaten typical diet food either during that time, just a normal diet (including burgers, pavlova and wine at an Anzac Day BBQ).  This is great tool and I can thoroughly recommend it.

Did you watch it?  What did you think of the dress, etc?  And what about the guests' dresses?

DH and I watched it from the comfort of our sofa.  I didn't really consider trekking into London to try a be there in person - after all, if you didn't have an invitation, how much would you really see?  There'd be crowds and crushes and queuing and standing for hours (and England's unpredictable but usually cold weather), and that just isn't me. So I watched it all on the BBC.

Most of the dresses were beautiful.  Kate looked stunning and her gown was an absolute classic with it's sweetheart neckline and lace over-top.  Her sister's dress was also beautiful - I loved the line and the fit - 1930's curvy.

On a negative note, Beatrice and Eugene need someone to take them in hand and dress them.  They're in their early '20's and yet they looked like mutton dressed up as lamb.  One (the redhead) wore an OK outfit but the colour completely wiped out her complexion;  the other wore a good colour, but the cut just made her look dumpy and fat.  Both of them need to be given make-up lessons, since their eye make-up just looked tarty.

Personally, I thought it was a lovely wedding.  With the exception of the crowds outside and the world's media watching, it could have been anyone-else's wedding, albeit one where a lot of money was spent.  William and Kate are such nice, normal people. Outside their Royal duties and visits to his family, they live a normal life - grocery shopping, cooking each other meals, making tea for their friends/colleagues.  They've both held down jobs and earned their own income.  I just hope the press will give them the benefit of a private life and leave them alone when they're not "on duty".


They are very much in love and obviously very good friends.  I wish them a long and happy life together.  If they're as happy as DH and I, they will be very lucky indeed.

I have been trying since yesterday to buy my sister's birthday present.  So far, neither major Australian department store website is willing to play ball.  One keeps crashing on checkout.  The other, won't let me even get that far.

Her birthday is Friday.  And it's a big one.  I want to get her something she'd really like instead of another bunch of flowers.

Please reconsider the decision to discontinue Sublime Organic Merino DK.  It is a luscious yarn to knit with, buttery soft to the touch and warm and cuddly too.  I was lucky enough to purchase some from Black Sheep Yarns and I'm currently knitting your Willow jumper out of it.  My only regret is that I didn't purchase more for my stash.

This is a lovely woollen yarn, why did you stop making it?  Please reconsider.

Pam  (emailed today)
Posted by PipneyJane at 14:18 No comments:

Today had one of those frustrating afternoons.  I had a report to produce that I'd forgotten how to do, followed by the finance system going on a go slow.  By 6pm, it had ground to a complete holt, twice, but  I had an invoice to get out, so had to persist.  Lots of time spent waiting for the system to respond to even the simplest commands.   With my computer seizing up,  I daydreamed, wistfully deciding what I'd do if I won certain amounts of money in the lottery.

A win of £1 million, would mean we'd both be able to retire.   I'd do the above, and then spend another £300,000 on rental flats - maybe buying a couple outright for the income, as well as using some of the money to fund deposits for others.  The remaining £200,000 would go on shares.

If it was a £10 million win, we'd be able to do all of the above and give some sizeable cash gifts to family.  With £10 million, none of the properties would need mortgages, so would give us a sizeable income every month, to live off and reinvest.

I didn't get any further - a colleague interrupted my reverie and I didn't feel like sharing my thoughts with him.  Instead, I had to turn my mind back to work.

Scrummy with a touch of spinach

Several months ago while surfing the "condemned food counter" at Tesco, I scored the final four inches of a chorizo sausage discarded from the deli.  like many such prizes, it went into the freezer until I decided what to do with it.  I was really tempted to try Kale and Chickpea Stew a la Crazy Aunt Purl but DH doesn't like cooked kale or many of its relatives (cabbage, etc).  He'll eat them raw, but not cooked.

Saturday, when we were grocery shopping, I hit on making it with spinach.  Thanks to an offer, I could pick up a large bunch of spinach for 60p.  DH will eat spinach raw in salads and cooked in Sophie Dahl's Dhal so I rationalised that maybe, just maybe, he'd eat it in this.  The original recipe is here.  This is my version.

This goes well over couscous or with good bread for dunking.  It is even better when left to be eaten on the second day.

And the verdict?  DH declared it "Scrummy", went back for seconds, and then demanded that I make it again soon.  Even the dreaded spinach got the thumbs up.

To everyone who has already sponsored me for last Sunday's Lincoln10k:  a BIG THANK YOU.  If you haven't and you want to, there is still time.  Just click here.

In the meantime, I promised you photos.  The Mrs Slocombe Academy for Young Ladies turned out in force.  Naturally, we hurt the eyes of everyone who looked at us. 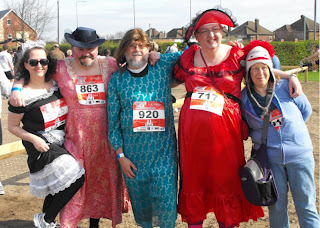 (From left to right, Fifi, Dorothy, Sheila, Scarlet and Hester.  Chris W is missing because he is a serious runner and was busy "getting in the zone".)

There was a small panic on Friday, when I realised I couldn't find my race number.  I phoned the council and they sorted me out with a backup one, which I collected during the morning before the race.   Dorothy sorted us out with pink gym-bloomers - Mrs S would be proud. 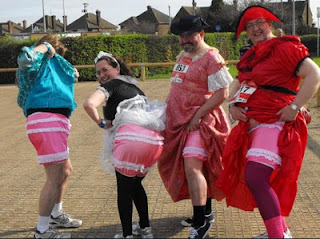 Once the signal blew, it took us about 10 minutes to cross the starting line.  All the walkers were in the slowest group, at the back. 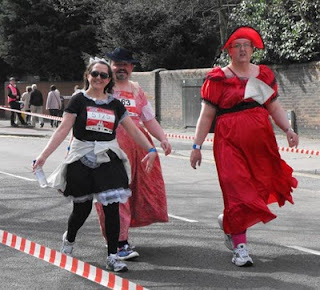 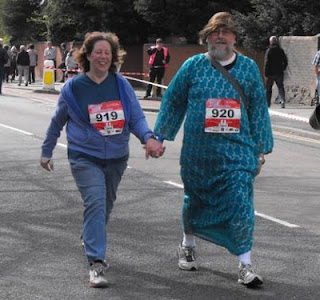 Our official times haven't been posted yet, but we know we completed the race in less than 1 hour 46 minutes, because that was the time on the race clock when we crossed the finishing line.   Here is the whole team: 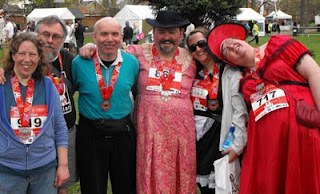 And heading back to our hotel: 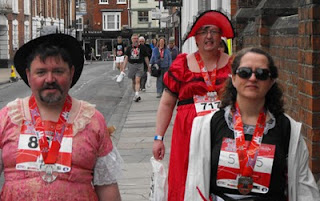 I must say, the staff in the hotel didn't bat an eyelash when we staggered into the bar dressed like that and ordered a victory round.  At that point, I had a Gin and Tonic in my sights and wasn't stopping for anyone.

We had a great time.  Thank you Lincoln, and thank you to everyone who has sponsored us.