To the man with whom I share my life

I miss you, Lover. Working away from you, at Site, sucks. Can't wait to get home tonight. 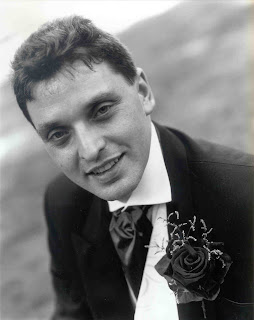 Posted by PipneyJane at 09:01 No comments:

Indiana Jones & the Kingdom of the Crystal Skull

We went to see the new Indiana Jones film last night. I really enjoyed it. It is true to it's B-movie Genre. Without giving away too much of the plot (I hope), I'd really, really like some answers to the following:-
If you want to hear a really entertaining review of the film, track down Mark Kermode's review from Friday on BBC Radio Five Live (you can download it via the latest podcast but get in quick - you've only got to May 30th before that gets overwritten).

Someone once told me that the best way to get over writer's block is to just sit there and write rubbish for as long as it takes until something inside "clicks", the light comes on and the story starts to unfold itself again.

I'm that way with my weight at the moment. One day, I'm counting points and "good"; the next day, I blow it all on chocolate. Or cheese. For what seems like forever, I've been treading water: up a pound one week, down a pound the next. It's not what a I want to do - I'd like to get to my "real" goal weight please - but wanting and doing are two separate things. (Oh, and while we're at it, I'd like a flat stomach, please, and a waist.)

I said as much at Weight Watchers on Wednesday night. My head isn't in the right place. I can almost cope at home, when I'm in charge of the cooking, but let me loose in the outside world and it's as if the Eating Olympics have started and I'm representing Australia. My social life seems to revolve around food - either in restaurants or a takeaway eaten on someone's sofa or a meal cooked by a friend keen to show off her culinary skills. Oh, and those days when I'm too tired to cook? Please someone, keep me away from the takeaway menu!

Throw into the mix that it's a fact of life that I travel for work. At least one week in four, I drive to Site for 3 days/2 nights. Excluding the last time, every single trip I have made left me feeling that I was at the mercy of restaurant chefs. If there was something healthy on the menu, it was bound to involve prawns (and I'm allergic to prawns). And of course the menu item that caught my eye (or smelt so good wafting from the kitchen) was bound to involve a zillion points.

Why, when I'm eating in a restaurant do I feel compelled to order something I wouldn't cook at home, usually covered in cheese or cream sauce or laden with pastry? Actually, maybe that is my problem: I'm a damn good cook. We eat such a varied-but-WW diet at home, that the list of things I don't make is quite small and skewed to the things I don't cook because they're too high in points. My brain rebels, demanding "why restrict my order to pan fried fillet of salmon with a side of vegetables, when I came home with 14 fillets last time I did my supermarket shop? I could make that at home. What haven't I had lately?". (The healthy choice in a restaurant is nearly always salmon. Why are British chefs so narrow minded?)

After three days away, I normally return home feeling as if I'd applied a layer of lard to the inside of my gut and smeared my belly with double cream.

On the face of it, the trip last week was very little different. Since us contractors have been banned from the Refinery's canteen, I stopped at Marks & Spencer on the way up to buy lunch for the three days. Maybe I was earlier than usual so they had some stock, or maybe they've expanded their range, but their Count on Us sandwiches caught my eye and for the first time they had choices I would eat. So I bought two chicken wraps and a chicken sandwich and pointed them when I got to work - 4.5 points each and I'd solved the problem of lunch for three days.

That night, in the hotel, I ordered dinner the way I normally do: choosing whatever menu items that caught my fancy. This hotel was a new one for me, but the Programme Director is a regular and raives about the food. For my starter I had scallops, pan fried with lardons of bacon and served over a mixed leaf salad. My main course was grilled duck breast on a bed of vegetables, lightly dressed with plum sauce. My major impression of the lovely meal I had? The chef is Weight Watcher. Dinner was beautifully prepared and presented. There was plenty of food. It tasted delicious. But it was lightly done. I began to feel like, maybe, just maybe, I can cope with this lifestyle after all.

Of course, I managed to blow the whole thing out of the water again when I got home. I've eaten takeaway food at least four times in the last week (or is that six, if you include the leftovers in my lunchbox on two separate days?). [sigh]

So there I was sitting at Weight Watchers on Wednesday, shaking my head when Denise asked "Did you have a good week?". "No. My brain isn't right. I can't get my thinking straight." I'm not going to stop attending meetings. I need this. It's just that I'm fumbling for the switch to turn it around; I haven't managed to make it click just yet.

What Gordon did next

Or should that be "How Alistair fixed it for Gordon"?

On Tuesday, the Chancellor of the Exchequer, Alistair Darling, dug the Prime Minister out of a hole and announced the equivalent of a u-turn over the abolition of the 10p tax band. In an "emergency budget", it was announced that personal allowances would be increased by £600 for all taxpayers whilst the starting level for 40% tax band was lowered by £600, so that the net benefit would only be felt by the UK's 25 million basic rate taxpayers who will get an extra £120 per annum in their pockets.

(Cue much dancing and rejoicing in the streets by worried Labour politicians).

So what does this mean? Is it a good thing or not? The devil, as usual, is in the detail.

Firstly, it doesn't take effect until September, so the poorest taxpayers must struggle through until then. They'll get a £60 "bonus" in their September pay packets, followed by £10 a month there-after. Bad thing.

Secondly, does it alleviate the extra tax they will still have to pay? The answer is MAYBE. It depends how you look at it. If you are comparing last year with this year, it can be argued that your taxpayer is better off because the main tax band, the "basic rate" band, has also decreased from 22% to 20%. And then you have to factor in the annual inflation-linked increase in personal allowances...

Let's use a hypothetical low income earner, who earns £11,000 per year and call her Jo Broke . Click on the image to make it bigger.

Jo paid £1,003 in tax last year. If Tuesday hadn't happened, she'd be paying £1,113 in tax this year, an increase of £113. However, because the abolition of the 10p tax band was kept so quiet, Jo would have been expecting to only pay the £890 of scenario 2. Thanks to Tuesday, she's still paying £113 more than she expected, but it's less than last year. I think I'll leave you to draw your own conclusions on whether she has got fair treatment.

And what about the people who earn enough to pay 40% tax? Thanks to Tuesday, they'll be paying an extra £120 in tax this year. Since anyone earning £40,835* or more pays 40% tax on their earnings over that sum, that is a hell of a lot of people who will feel aggrieved come September. Me? I feel aggrieved now.

* Let's put a salary of £40,835 into context: it's about 1/6 of the average house price in the UK. In most industries, it's a starting salary for bottom level management.

Posted by PipneyJane at 06:49 No comments:

I've been a bit quiet for the last week or so, basically because I've been sick. A cold triggered my shingles to re-emerge, leaving me feeling shattered. (I was actually wondering why I felt like I hadn't had my thyroxin for a week, when the rash emerged on my abdomen. Zombies'r'us.)

It doesn't mean I haven't wanted to blog, rather I haven't had the energy. I'd drag myself into work, yawn my way home and collapse on the couch. Fortunately, work has been more about process and less about brain-power, so I've been able to plod through.

Normal service will be resumed in a few days.