Still better than nothing for this expat Aussie.

- Pam (the great Tim Tam quest continues)
Posted by PipneyJane at 14:10 No comments:

Except, it hasn't ended.  If you were a follower of Harold Camping, how foolish would you feel now?

It's people like Camping that make me hate fundamentalists, people who ask you to believe without question, without providing evidence.  More to the point, how many fundamentalist preachers ask their followers to bankroll them?  (And make themselves rich off their labours of their much poorer followers.)  A lot, particularly in the States.    Remember Jim and Tammy Bakker?  Their followers paid for solid gold taps in their bathroom.   And they aren't the only ones - Wikipedia has a long list of scandals, some financial, some sexual, where preachers have used and abused their positions of power.

- Pam (wondering how Camping will wriggle out of it this time.)
Posted by PipneyJane at 09:50 No comments:

A new use for garden furniture: 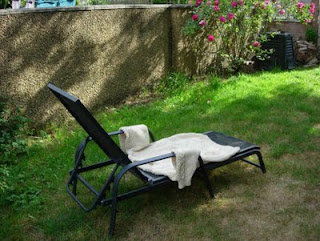 This is DH's new sweater drying in the shade in garden.  I don't have a sweater dryer but our garden furniture is made our of a coated mesh, which works beautifully.

The body of the Willow jumper, knitted in the round: 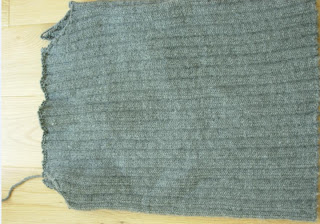 The sleeves at 39cm/15.5 inches, knitted in the round, two at at time, using magic loop: 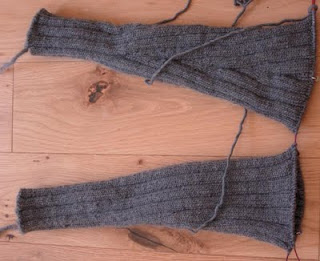 (No idea why these two photos are such different colours - they were taken seconds apart in exactly the same place without the use of the flash.)

Only once before have I ever tried to knit sleeves two at a time and that was just a couple of inches on a jumper my sister had started but fallen out of love with.  I hated it.  The stitches were crammed on the needle (she was using 14 inch straights) and the two balls of yarn kept tangling.  It put me off for at least 30 years.  However, I was listening to the Knitmore Girls and Jasmin kept singing the praises of knitting sleeves in the round, two at a time using magic loop, so I thought I'd give it a go.  After all, what could be better than a) sleeves that are identical in both length and increases, and b) no seams to sew?

Apart from a bit of pfaffing around setting it all up on the needle, I'm a convert.  Without any effort, the yarn isn't tangling.  Even my annoyance has worn off at having to regularly slide things around the needle.  I'm particularly proud of the sleeve "seams". 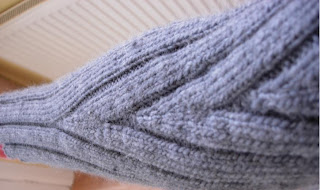 Thanks to a class I took with Annie Modesit, I knew how to do left leaning and right leaning increases in the knit stitch, but it took a minute or two to work out how to do them purlwise.

I'd like to thank everyone for their kind words.  I do appreciate them.

I'm on leave for the next week, so I'm hoping to get some blogging mojo back, plus post pictures of my more recent FO's.  The only concrete plans I have are rehearsals tonight/tomorrow afternoon for a concert tomorrow night, and a visit to the butcher on Monday.  (Why Monday?  There's a 10% discount on Mondays.)   Oh, and since I seem to be zooming through the sleeves for the Willow jumper, I'm planning to swatch for the next project in my Ravelry queue.

Have a good weekend everyone.

Look what I scored in a charity shop near work, when I popped out to go to Waitrose for a quick grocery shop: 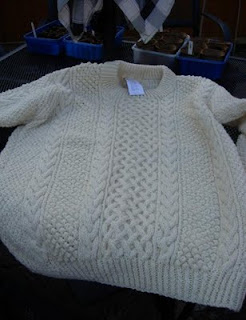 a lovely, handmade aran sweater in DH's size. It cost all of £4.99.   (That's the price-tag you can see).  Someone went to a lot of trouble to make this. I think it's in DK weight yarn, so it must have taken months.  Just take a close look at this seam: 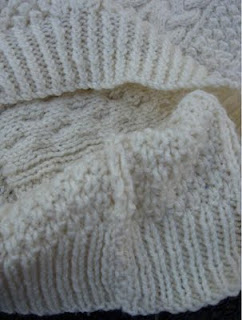 No idea why it ended up in a charity shop, but I'm glad I found a home for it.

In search of tea and sympathy

There are some days you don't want to repeat. Mine started with a telephone call - Eldest, my sister, rang me at 7am to tell me that my dad's second youngest brother died overnight. (Dad was oldest of four.) He was 89 or so and was widowed 2 years ago. He didn't have children. The funeral is on Thursday and I won't be flying home.

I'm left mourning the might-have-beens. We weren't close. I barely knew him and can count on one hand the number of times I met his wife. Thanks to things I don't really understand, my mother took against my aunt and blamed her for all sorts of horrible things. (To excuse my mum, her military service ended with a major head injury and we don't really know what damage was done. Mum blamed Aunty for her head injury amongst other things, even though they didn't meet for another 4 or 5 years.)

The net effect is that we were excluded from all sorts of family functions over the years. It saddens me that we didn't know relatives who lived just a couple of miles away.  You know how many families pass down stories from one generation to the next, say, of great-uncle Tommy who used to liven up parties with a standup routine and was decorated at the Somme but was too modest to say why?  Well, I don't have any of that.  There are stories out there, but I've never heard them.

All I can do now is reach out to my cousins and hope, when they think of me, they think kindly thoughts. I've spoken to my cousin, who's taken on the next-of-kin duties with some moral support from Eldest. I think I'll phone her again soon.  She's a lovely person, who I always go to visit when I go back to Australia.  I'd like to know her better.

Talking about money - the Housekeeping

(Yay!  Blogger is working agan.  For a while there, I was worried that Google had completely screwed it up.)

Yesterday was the first Friday afternoon in months where I had the house to myself.  DH has started a full time job with regular hours, 9 to 6.  It's not in his field - it's in retail, whereas he's a design engineer who's always worked in manufacturing - and the pay is just above minimum wage, but knowing that he'll have regular money coming in and receive his statutory benefits (sick pay, holiday pay, etc) is a great relief.  It also means we can start looking forward instead of staying in fire-fighting mode.

As a result, last weekend, we spent an hour or so going over our finances.  One of the hot topics was what to do with our housekeeping kitty.  Until now, we've been drawing cash each month and stashing it in various pots:

The Meat, Christmas and Bulk funds are left to accumulate until there is a reason to spend them, whereas the Grocery kitty rarely has anything left at the end of the month.  If there are bargains to stock up on, we raid the Bulk Fund.  I've thought for a while that £10/month isn't suffiicent and that's one of the things we agreed about on Sunday, upping it by £5 each to £20/month.

One of my permanent niggles is that we don't put money aside for the garden.  At the moment, either we pay for it individually and suck up the cost or then go through the drawn out process of getting it back from our joint savings account (an internet account that doesn't allow you to transfer money anywhere - you have to go to an ATM or request a cheque).   I don't know exactly how much we spent last year on the garden but it was under £100.

One of DH's permanent niggles is that we have these "funds" sitting around in cash for months at a time, not earning interest.  It was also one of the reasons that he's previously vetoed a garden fund - he didn't like the idea of leaving that cash lying around for 9 months of the year.

On Sunday, we reached a compromise:  we'd start a garden fund but it'd be saved in ING instead of in cash.  Ditto the bulk fund and ditto the Christmas fund.  The garden fund would be £10/month.  Bulk is to go up and Christmas is to remain the same as before.  In ING, they'll have their own accounts and it's easy to get reimbursed since we can transfer the money bank-to-bank.

So, our new housekeeping budget is as follows:-