Frugal Friday (on Saturday): Think when you spend the money

Have you been following the news about the Christchurch Earthquake in New Zealand?  Have you donated? The Red Cross are running various donation sites - I used the British one to ensure they could claim tax relief on my donation and thus increase its value by 20%.

I was thinking about the earthquake on my drive home from Site yesterday, wondering what I could do from 15,000 miles away.  Australians tend to think of New Zealand as our little brother; they were part of the federation talks in the 1890's until New South Wales pissed them off.  You didn't need a passport to travel between the two countries until the 1970's, when the Australian government imposed that requirement.  And about a third of all Kiwis live in Australia.

Anyway, I was wondering what I could do.  As a knitter, my first instinct said "Knit something to donate", but I'm so far away that donating knitted goods is impractical.  So I settled on donating cash.

Then I saw this, on the back of a toilet door in the motorway services at South Mimms: 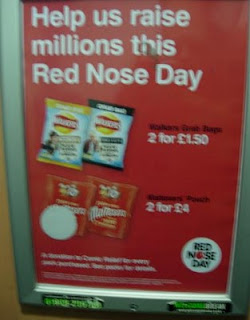 And it made my blood boil.  So much so, that I took a photo.

I have nothing against Red Nose Day, the biennial fundraising event run by Comic Relief.  I'm sure they're grateful for the free publicity.  However, what made me angry is the implication that they'll get the £1.50 or £4 if I buy those products from the services shop.  They'll be lucky if they get 10 or 20 pence.  How many people fall for this?  Sure, if you were going to buy an overly expensive box of Maltesers from the shop anyway, then buying the packet that ensures a donation to charity might be a nice gesture.  But were you going to buy two before you saw the promotion?  And at a price where you could get four or five packets from the supermarket?

Surely it's better to donate money directly to the charity involved and cut out the middle man?    In the case of the Maltesers, if I really wanted a snack, I could have bought something healthy from the Waitrose next door and donated my change to Red Nose Day and still given more than they'd receive from the promotion.

This happens at Christmas, too, with all of those "charity Christmas cards", when the charity named is lucky to get a couple of pennies from an expensive packet of cards.


We all have limited funds.  If you want to donate money to charity, give it to them directly.  That way, they'll get the most benefit.

Frugal Friday : How I Saved The Week

I had a "well D'uh!" moment this afternoon.  After I collected my new glasses (see below), I popped into the bank to deposit a cheque and ended up having a chat with one of their advisors.  In the middle of her trying to sell me one of their "new, improved" cheque accounts complete with shiny fees, we both had an epiphany.

Her rationale for "upgrading" my account to a shiny new one was that it because it has a much lower rate of overdraft interest, even with the fees it'd be cheaper.  They're currently charging nearly 20% p.a. on overdrafts for accounts like mine.  Plus they've imposed a monthly fixed fee of £5 for each month in which the account goes into overdraft.  And even with last year's good effort, I'm still overdrawn for much of the month. If I didn't want to do that, she suggested, what about taking on a bank loan and transferring my overdraft to that?  Or utilise a 0% credit card offer?    "I've got a 0% credit card offer.  I used it to pay for the freehold to my flat," says I.

"And why haven't you transfered your overdraft to that?" she demanded.

At which point, I stared at her.  And the penny dropped.

I could do that. And I could continue paying down that debt and pay it off faster because I wouldn't be clobbered by interest and charges each month.  The effective interest rate is about 4% p.a. instead of 20% p.a., so why haven't I done it before?  (4% because that's the rate of the balance transfer fee.  I'm simplifying, of course.)  The 0% rate runs out in November - that should be enough time to clear the overdraft, while continuing to pay down the balance already on there for the freehold.

There are risks.  The biggest being that I could drift back into overdraft, ending up worse off than where I started:  heavily overdrawn but this time carrying a similar balance on a credit card.  Can I trust myself not to do that?  A year ago, I don't know, but now I think so.  I've paid a lot of debt off in the last year.  I track my spending.  I've put money into savings.  I've recovered from the drain on my finances of having an empty flat (better, the tenant has just signed a new 12-month lease with a rent increase of £25/month).  And my salary's gone up (I've had two raises).

When I got home, I logged into the credit card website and made the transfer.  It does make sense.

PS:  About the title, one of the podcasts I listen to is the Knitcents podcast.   Roue, the host, does a segment called "How I Saved The Week" where she lists her latest efforts to save money.  I've stolen it from her.
Posted by PipneyJane at 23:25 No comments:

Got my voice back

Hello, did you miss me?  It feels like forever since I last wrote.  Where do I start?  I've written a thousand blogs in my head but now they've all vanished. (Typical.)

OK, let's start with the computer.  I took it to a local tech place, where they found a damaged sector and nothing else.  There were no viruses, no bugs, no identifiable cause for Windows going SNAFU. I got it back last weekend - they did a complete rebuild and reinstalled Vista together with all the drivers.  £69 very well spent.   There is only one remaining problem:  my bluetooth mouse won't work.  I haven't tested yet whether the problem is the mouse or the computer.  If the latter, then it's a physical problem and not the driver - I've managed to test the driver.  Any suggestions?

In other news, I have new glasses - my first pair of verifocals*.  Collected them this afternoon. They look pretty similar to my existing glasses, so no great change there.  First impressions of verifocals:  the reading "corner" by the nose is fine, easy to adjust to;  it's the change of focus out by the arms that is weird.  I wasn't expecting that.  It's like looking into a mirror in a hall-of-mirrors and using the reflection to see with.  It only happens if I turn my eyes instead of my head to look at something at a range of 3 feet or so away.  Monday night's rehearsal is going to be a big test - can I read my music and watch the conductor without feeling sea-sick?


* This feels like a further step in the transformation into my mother.  Not only do I look like her and suffer her infertility problems, I've developed her eyes too.  Short sight and long sight in the same eyeball.  < sigh >
Posted by PipneyJane at 22:32 No comments:

DH is at work so I've nicked borrowed his computer to do a quick update.  I've been at Site most of the week, got home an hour ago and will be back there on Tuesday.  (Sunday night = Superbowl night.  With the match finishing around 3.30am, I've taken Monday off.)  The laptop situation is really, really annoying me.  I'm not on it all night, everynight when I'm away, but I resent having that choice taken away from me. And I miss the ability to witter away write down my thoughts as I want, when I want.

I had plans for this year.  It's amazing how those plans are dependent on having a computer.  I wanted to work out to an exercise DVD in the mornings when I'm at Site.  My choir will be singing in Nancy, France, in June and I wanted to learn some French beyond Ici est le facture pour le BlahBlah project (after four years dealing with the staff of a French client, my grasp of their language is still embarrassingly bad).  I wanted to blog more often.  I wanted to practice my singing using the rehearsal midi-files my choir provides.

Had a conversation yesterday with one of our tech guys at work.  My original plan was to drop the laptop off at the clinic at PC World but he suggested finding a local place instead, saying PC World's customer service had a bad reputation.  There's a place in Uxbridge I may try.  It needs Vista reinstalled and, probably, all the drivers.  Fingers crossed, I can drop it off tomorrow and get it back, fixed, on Monday afternoon.

On the way home tonight, I dropped into Costco and was very tempted by one of the netbooks.  I didn't buy it but it remains an option.  I could spend the Sanity Fund (currently £375 and all earmarked for an iPhone).  We'll see what tomorrow brings, I guess.

- Pam (feeling like a moaning minny)
Posted by PipneyJane at 21:14 No comments:

Apologies for the radio silence but...

I don't even know what half of those things do.   Why should software that comes preloaded fail? It's only two years old, for heaven's sake - why should it be having these problems?

I'm taking it to the clinic at PC World on Saturday and they can rebuild it.  In the meantime, I probably won't be blogging much.