I left my mobile phone at home this morning.  It's amazing how bereft I feel without it, considering that I can count on one hand the number of phone calls I make on it during the average working week.  But it's my main way of communicating with DH during the day.

I realise it's the ability to communicate easily with him that I miss.  Sure he can call my work number and I've got his mobile number if I need to call him, but I can't dash off a quick text about something unimportant but informative (e.g. "Went to butcher, bought x, y & z for freezer" or "dinner tonight, will cook Y.  If you get home before me, please chop onions, mushrooms & garlic"). I use texts for things that aren't time sensitive but keep him informed about what I'm up to or to make him smile; the sort of things you'd use an email for but he doesn't regularly access his email during the day.

Today, I'd like to wish DH luck when he gives blood this afternoon.  And to tell him that I'll try packing "Junior", my carry-on suitcase when I get home so that he doesn't have to dig the next largest one out of storage.

I'll just have to remember to tell him when I get home.

I can't believe it's been 3 weeks since I blogged!  Where did the time go?

So, what have I been up to?  In chronological order, I've: sung in a concert; helped run a games convention; found some RPG-playing knitters and co-foundered The Order of the Pointy Sticks ("greetings fellow Minions!"); driven to/from Scotland to attend DH's best friend's father's funeral; rehearsed for a concert in France; watched England play Switzerland at Wembley; gardened a bit; spent the day with a friend from the Motley Fool who was en-route to Portugal; visited the BBC; and knitted a lot.  I'll give you some potted highlights.

On Saturday 21st May, my choir performed Purcell's Funeral Music for Queen Mary; Holst's Choral Fantasia, Rutter's Psalm 150 and the Rutter Gloria.  Although the Rutter was lovely ("Utterly Rutterly" according to our conductor), a lot of the concert was music to slit your wrists by: sorrowful, heartfelt and full of pain.  Perfect music for Goths.  This is particularly true of the Choral Fantasia, which I keep referring to as "A hymn for the damned".

Given that I was mourning one death and expecting another, I found the drum and brass intro to the Purcell to be especially painful.  If you need a choir and brass ensemble for a funeral, let me know.... In the meantime, we leave on concert tour on Thursday.  We're off to Nancy to sing Faure's Requiem with the Choeur Nancy Ducale on Saturday night.

The Games Convention and the Order of the Pointy Sticks

Shadow-Con is two days of RPG's, mayhem and dice which drives DH to distraction DH organises every Spring Bank Holiday Weekend, aided and abetted by a group of press-ganged willing volunteers.  This year was more fraught than normal because BF was already in Scotland, having dashed up when his dad took a turn for the worse, and thus could not do his usual share of the workload (printing tickets, manning the front desk, buying some of the stuff for the Tuck Shop, setting up on the Friday night and operating the heart of the sun a.k.a. the coal-fired barbecue we use on the Saturday night of the Con).  DH shouldered most of it.

My usual chores are manning the Tuck Shop, ordering and fetching the meat for the barbecue and doing the Saturday morning bacon butty run.  This year, I spent several hours re-creating the tickets (unobtainable because the file/template is on BF's computer), shopped for Tuck Shop and barbecue (I was comparison shopping for the barbecue when I found the Arnott's BBQ Shapes)  helped set up on the Friday night, ordered outdoor lighting for the barbecue.  My reward:  I got to listen to the cricket when I was in the Tuck Shop and I got to play in a couple of games for free.

I was on duty in the Tuck Shop on the Saturday, and knitting on my latest sock, when I discovered TWO MORE crafters:  a knitter and a crochetter.  I'd already outed a third in a Cthulhu game about 9 months ago, and before Saturday was over the four of us girls were talking patterns, comparing projects and swapping Ravelry IDs.  By close of play on Sunday, we'd formed The Order of the Pointy Sticks and started trying to arrange meet ups.  After ten years of wishing, Ladies and Gentlemen, I've found a knitting group.

Lots and lots of knitting

The body and sleeves of the Willow sweater are done. 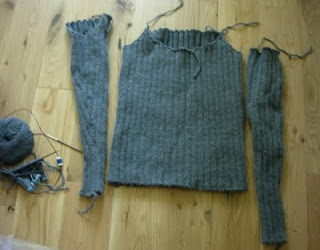 After weeks of easy motoring, I'm now working on the yoke.   It's a complex, cabled pattern, knitted sideways, that isn't charted. I don't think it can be because of the numerous short rows. This is the first time in ages, I've had to work cables from the written pattern and it's hard. I'm sure it requires far more concentration than working from a chart.  If anyone knows how to chart short rows, please let me know, I've got 8 repeats of 45 rows of this. 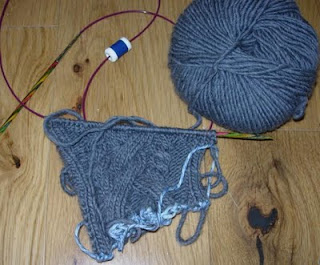 In the meantime, I needed something more mindless to knit while playing RPG's on Sundays, so I cast on the Three Hour Sweater  in Rowan's RYC Cotton Jeans from my stash.  The colourway is Blue Wash.  This pattern is famous/infamous on Ravelry:  it's a vintage, 1930's sweater knitted on big needles to fit a vintage size 16 (supposedly a modern US size 8).  The gauge is 4 stitches to the inch.  The needle sizes given in the pattern are obviously modern add-ons - 1930's Americans didn't use the metric system. 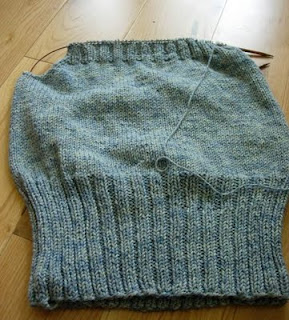 (I'm knitting it in the round instead of flat.)  Most knitters have had to modify it to fit their size, including me - my modifications can be found here.   So far, it's taken me about 8 hours.
And, finally, here are my latest socks for DH in Lang's Jawoll Magic. 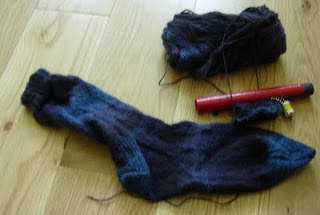 Posted by PipneyJane at 18:20 No comments: