I am a numpty

I'm at Site this week.  Yesterday, during my drive up, I reached into my handbag to check my phone and realised, with a cold sick feeling, that I'd left it at home.  Stopped at the Services, where I normally text/phone DH to tell him "I'm OK and have got this far";  tore my bag apart.  No phone.  Dashed to a phone booth to call home:  yes, said DH, my phone was were I'd left it, dangling from the bedside table while it was recharging.

Damn. Damn.  Damn!  I need my phone when I'm travelling:  it's my link with home; my alarm clock; and the main way people can contact me.

Solution:  stopped at the supermarket and picked up the cheapest pay-as-you-go mobile phone I could find.  £19 plus £10 for the top-up.  I'd rather not have spent the money but it'll do for the week and will work as a backup phone/guest phone for overseas visitors.  And the top up doesn't expire.

As you know, I travel to Site a lot, every second week at the moment.  That involves hotel bills, meal bills; mileage claims and buying my lunch, etc.  I put the vast majority of my spending on a credit card, while I'm here, so that I don't have to fund my expenses (I claim them back from work and pay before the due date).  I've been doing this journey at least once a month for the last three years.  The Project has about three months left to run.

About two thirds of my regular grocery shopping is at Tesco, together with 99% of the fuel we purchase for the car.  Tesco has a "Clubcard" which enables you to collect points that give you vouchers quarterly of £0.01 for every £1 you spend in store.  They also have a Clubcard credit card that gives you points on all your spending over £4 plus double points when you shop "in store".  I've had a Tesco credit card for over two years.  Got it for a 0% balance transfer and never used it since.

It only occurred to me a week ago that maybe, just maybe, I should be using my Tesco credit card during my trips to Site because (well, d'uh!) I could be getting a free penny for every Pound I spend.  Mental head slap time.  At an average of £500 a trip, that's an free £5 each time I come to Site.

- Pam (better late than ever)
Posted by PipneyJane at 22:27 No comments:

Apologies for the lateness of this Sit-Rep update.   It's not my fault!  In the last week of July, DH put a tank of diesel in the Toy for me and I've waited two weeks for him to tell me by how much I needed to reimburse him.  (Proof that nagging doesn't work - I must have asked a dozen times.)  Anyway, here is my update.  My last update is here.

STASH  Maintained cold sheep up until the day that I visited KnitNation on 31st July, when the lovely Sarah at Brownberry Yarns sold me 6 beautiful skeins of Artesano Alpaca Aran in a denim blue (photo to follow - I have a KnitNation Report to post).  I bought their last six skeins in that colour, right out from under the nose of another knitter.  At the time, I wanted 8 skeins because I'm a bit worried about the yardage (6 skeins = only 864 yards/790 metres), so I've ordered 2 more from Brownberry but couldn't get the same dye lot.

In other Stash/Kniting news, I've knitted another skein of Heathland Hebridean into the Brown Cable Cardigan (almost finished the second front).  I didn't mention, last time that I started the second skein of the Wagtail Mohair half way up the back of the Mohair cardigan, which is now almost complete - I've got less than half of one front to go, plus the edging.  Two skeins of Phildar Shoot went into a 5 Hour Baby Sweater for a colleague, which left me with 3/4 of a skein - that yarn was a charity shop find in 2009.  The leftover Cherry Tree Hill yarn from my sister's Zig-Zag socks went into a pair of fingerless mittens using the same zig-zag pattern.    And I've finished off another skein of sock yarn.  So that's 5.5 skeins for a total of 15.5 skeins.   Doesn't seem like a lot, given the amount of knitting involved.

GARDEN  Guess what my birthday present from was this year?  A terracotta strawberry planter filled with compost and three strawberry plants!  The plants are thriving and have given us a handful of strawberries (it is very late in the season).  One of them has already put out a runner, so we anchored it in a spare hole in the planter and now I have four plants.

On to the rest of the garden.  Didn't get a huge number of broad beans - while I was a dedicated squisher of blackfly, they won several battles.  The butternut squash is taking over the world, as are the tomatoes.  Most of the onions are doing well and the two broccolis which survived from last year have thrived (they were last year's failure-to-thrives that somehow survived being neglected in pots over the winter).   Some of the peppers and chillies are doing well but a couple of the jalapenos are just sitting there 3 inches high and sulking - in their case, I'm wondering if they were getting waterlogged in their grow-bags.  The rocket did well, then bolted and now is setting seed.    We've harvested two of the three potatoes and they were heavenly.

On the failure side:  I planted out some pak-choi and it died in the sun.  I doubt the garlic harvest will be that good but at least, now, I know what I've done wrong - garlic needs a freeze early on to prosper.  The courgettes failed to thrive, as did the runner beans; the plants didn't die; they just didn't grow any bigger.  I think watering may have been an issue, since June and July were both dry months and, although we watered every night, I don't think they got enough.  About 3 weeks ago, I invested in a soaker hose, which seems to be helping.

As well as buying and planting out my garlic before Christmas next time, the other thing I need to do is to get some fresh seeds.  The broad beans were grown from old seed, which may have been a factor in their not growing many beans.

FITNESS  Weight Watchers?  What's Weight Watchers?   Let's not go there, shall we?  I'm still attending Pilates and Yoga classes, but I need to add some aerobic exercise pronto.  At least I've located my new running shoes (bought at Christmas).

OVERDRAFT Paid back a combined total of £233.02 for June (£127.76) and July (£105.26) which gives a total pay back of £970.18 for the year.  Although I'm glad to see the balance is decreasing, I know is has slowed down a lot.  There are two main reasons for the slow down:  I've set a couple of new savings goals (next year, I will pay cash for my Chelsea season ticket for the first time ever); and I've increased the amount of money that goes into our joint account, in order to cover more of the shortfall from DH's unemployment.  I already know August will be a bad month for paying back the overdraft:  KnitNation fell into August's spending (it was after payday) and I've already run through my entire "Money To Live Off" budget.  The only hope for August is that I won't spend so much money on diesel for the car*, so the balance of the diesel accrual can be offset against the overrun.

SOCKS  As suspected, I didn't knit a complete pair of socks in June; instead, I did the Zig-Zag Fingerless Mittens and about half of one sock.  I finished those socks in July - they're my typical Use It Up Socks made from the leftovers of the self-patterning sock yarn and some Lisa Souza Sock! in ecru.  Hopefully, I can catch up in August.

* For my trips to Site, I habitually offset one tank of fuel against the money from my mileage claim since I use approximately one tank extra that week.  Since I'm going to site more often at the moment, it's possible I won't spend as much of my diesel accrual as I would in a more typical month.
Posted by PipneyJane at 11:18 No comments:

It all came out of Junior (my small suitcase), so why won't it all go back? 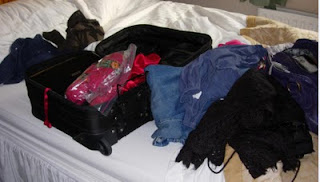 Something you don't see every day.

I think they got their fuel prices confused at the Tesco petrol station in Scunthorpe, when I was there last week. Diesel is never cheaper than unleaded petrol....  until now, that is.  Me thinks someone at Tesco made a mistake. 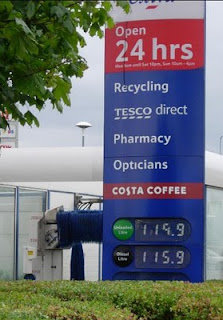 I double checked the prices shown on the bowser, before I filled up the Toy.  Yes, the diesel was 4p cheaper per litre.