After my last post, I gave up on the idea of going to HMQ’s Lying in State.  Instead, I moped around the house like a sulky teenager for a few days, before hatching a plan.  DH and I would go sit on the side of the A4, watch the Funeral on BBC iPlayer via my iPad and then pay our respects to the Funeral Cortège.  We knew the route for the cortège because TFL had published a list of road closures.
It all went off like clockwork.  We packed our picnic chairs, travel mugs of coffee, a hot lunch in wide mouthed thermoses, the iPad, etc, and drove to a side-street near the A4, arriving just as the Funeral was starting, and set up.  The road was lined with police officers, airmen and solders. When the officer-in-charge gave the signal for the 2 minutes silence, followed by the National Anthem, we stood to attention, too.  More and more people came to line the road and, eventually, this happened: 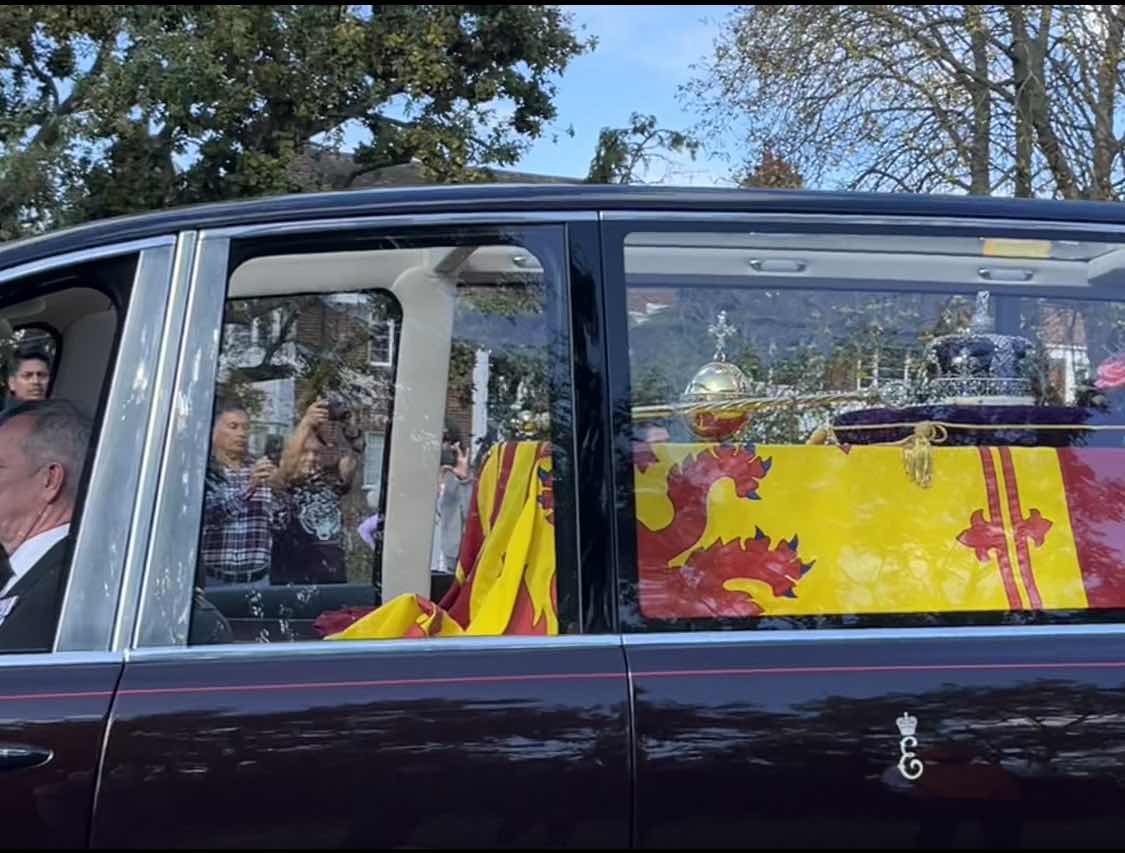 We even made it - fleetingly - onto the television. If you look very carefully at the next photo, you may just be able to spot my yellow chair and DH’s purple one, in the top left-hand corner, with us standing in front and our friend, Howard, standing behind my chair. 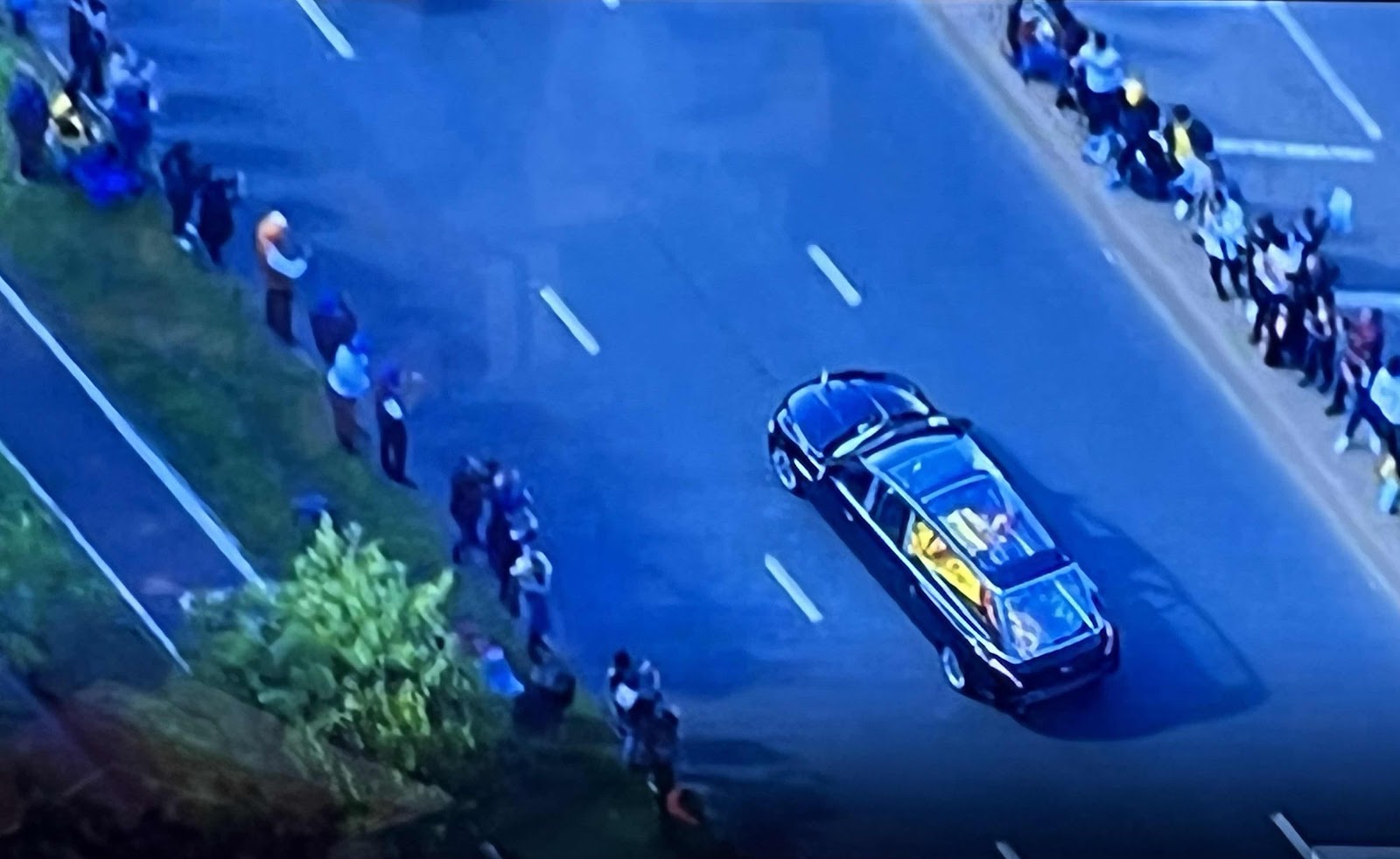 (Yes, I photographed the television.)
The following Saturday (24th), I went to Green Park to see the tributes that the general public had left.  There were thousands.  I wandered around, reading the messages and I cried.  Some were incredibly moving: 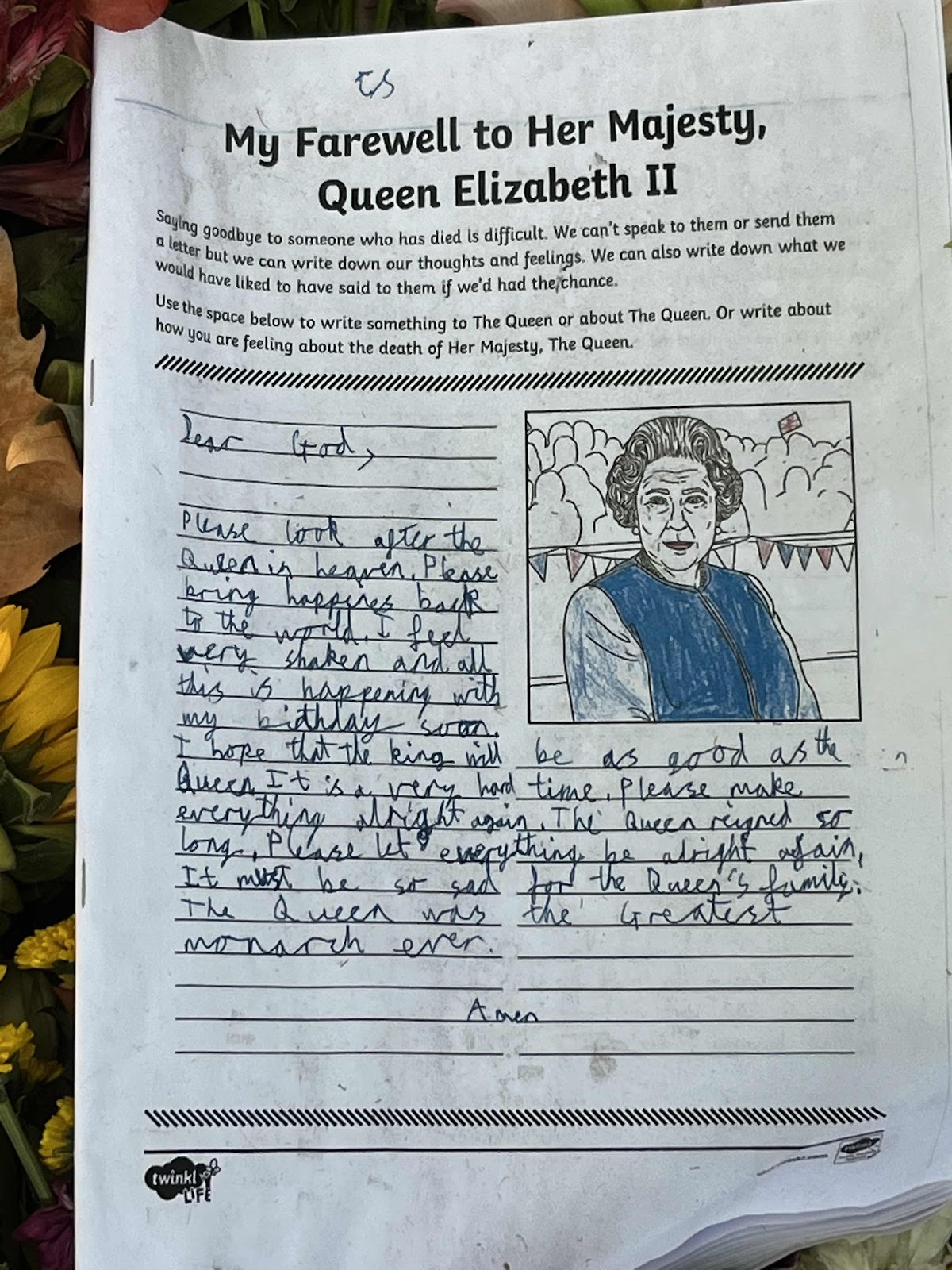 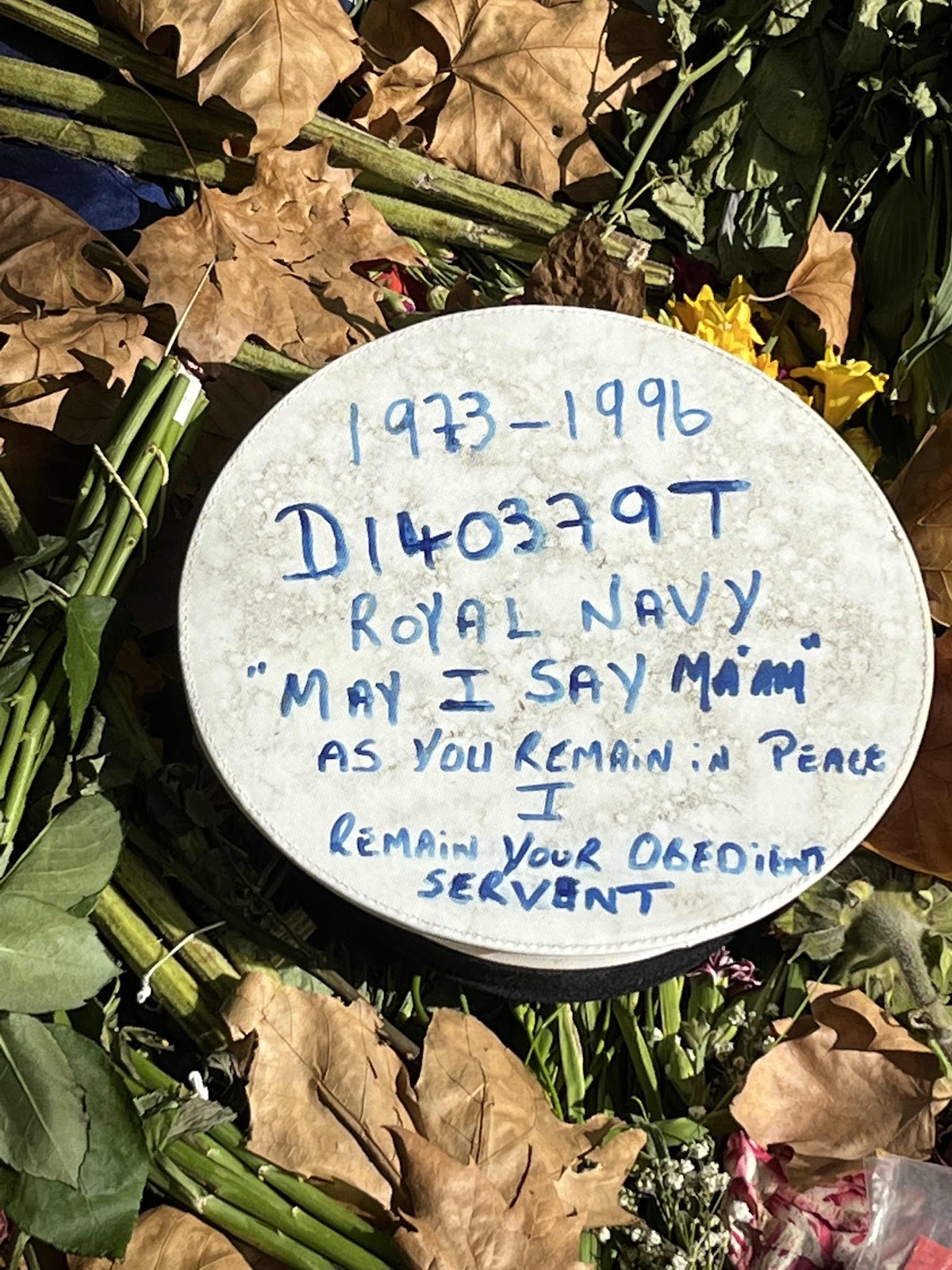 While others were just beautiful: 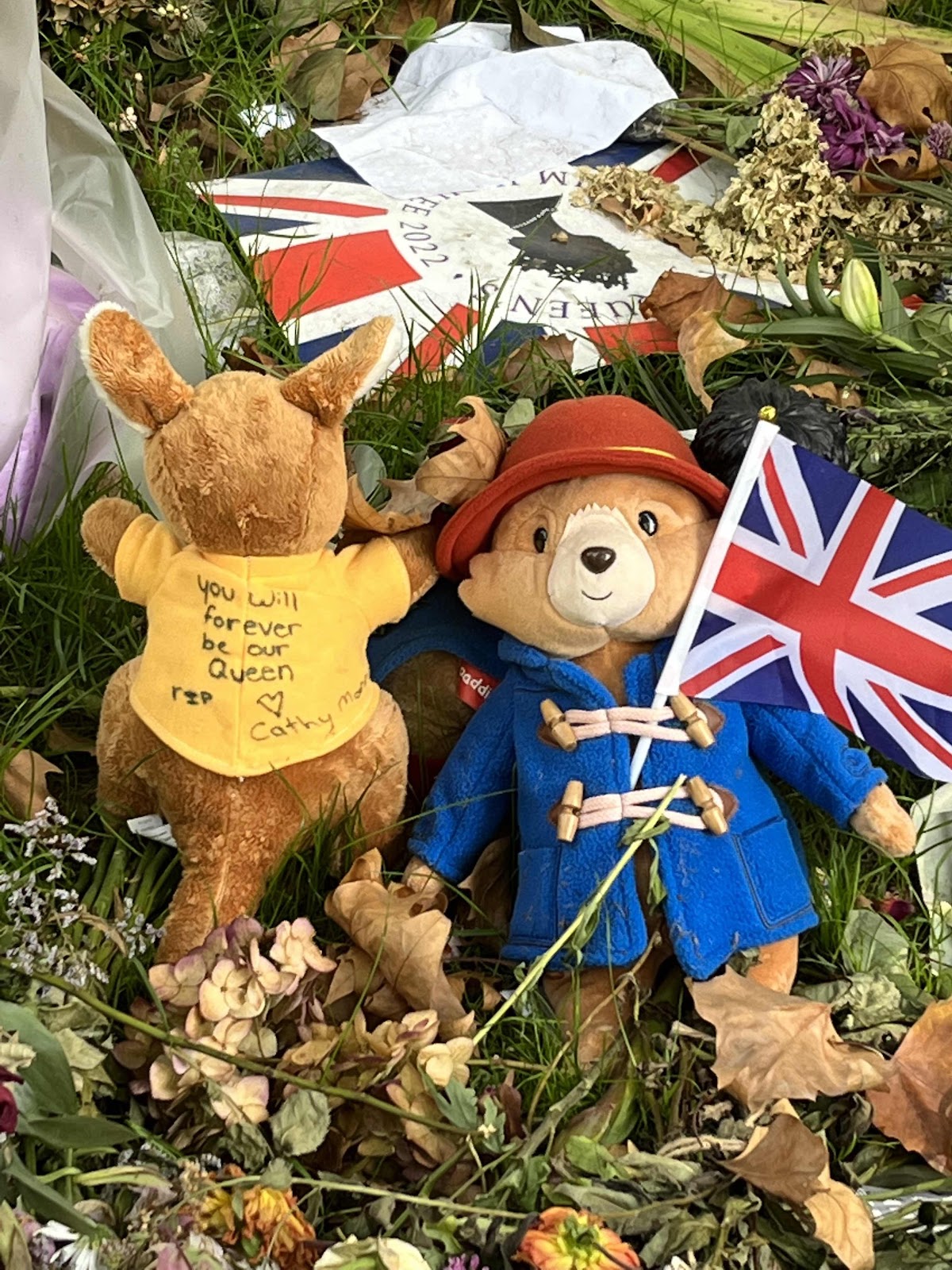 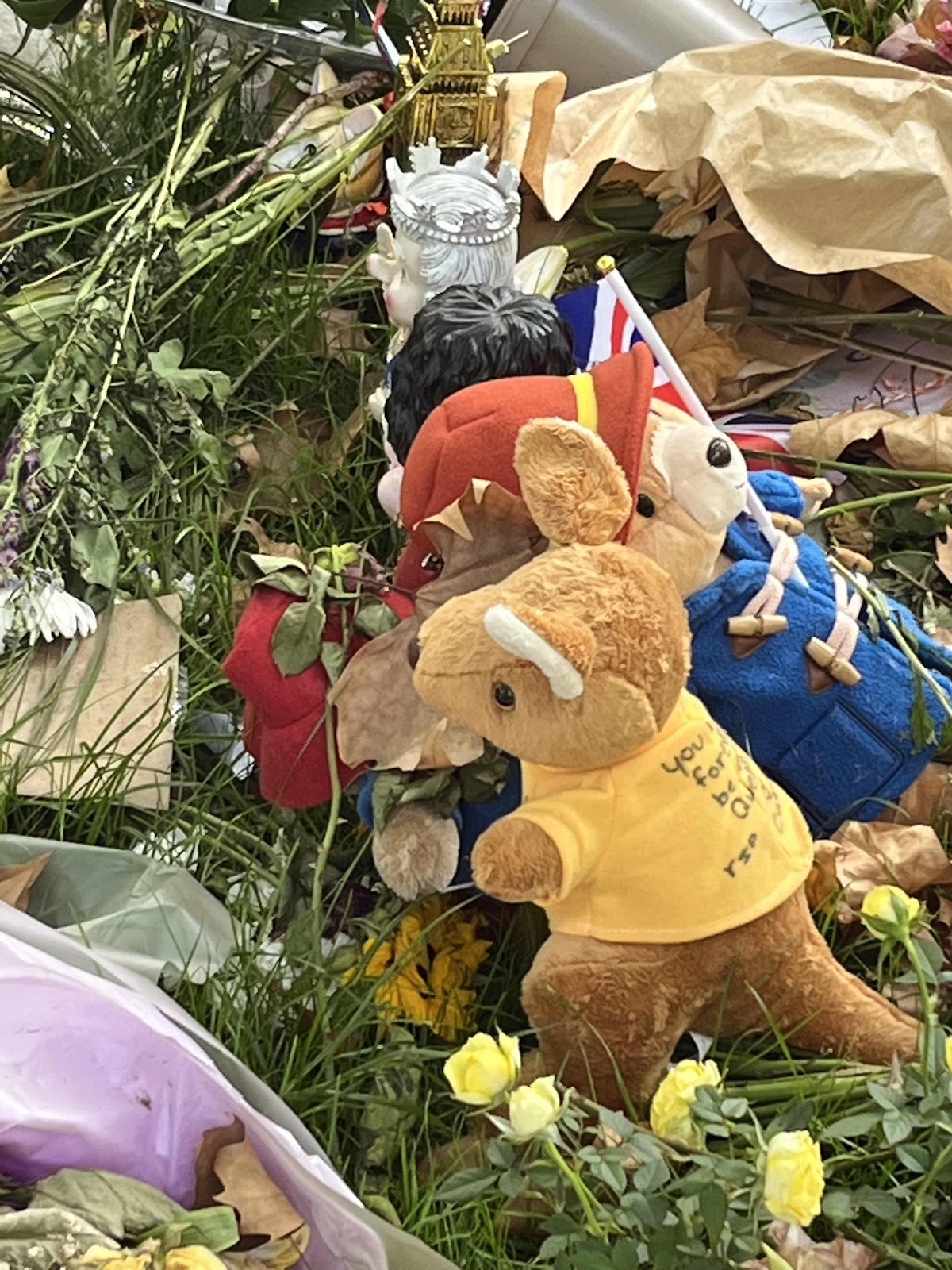 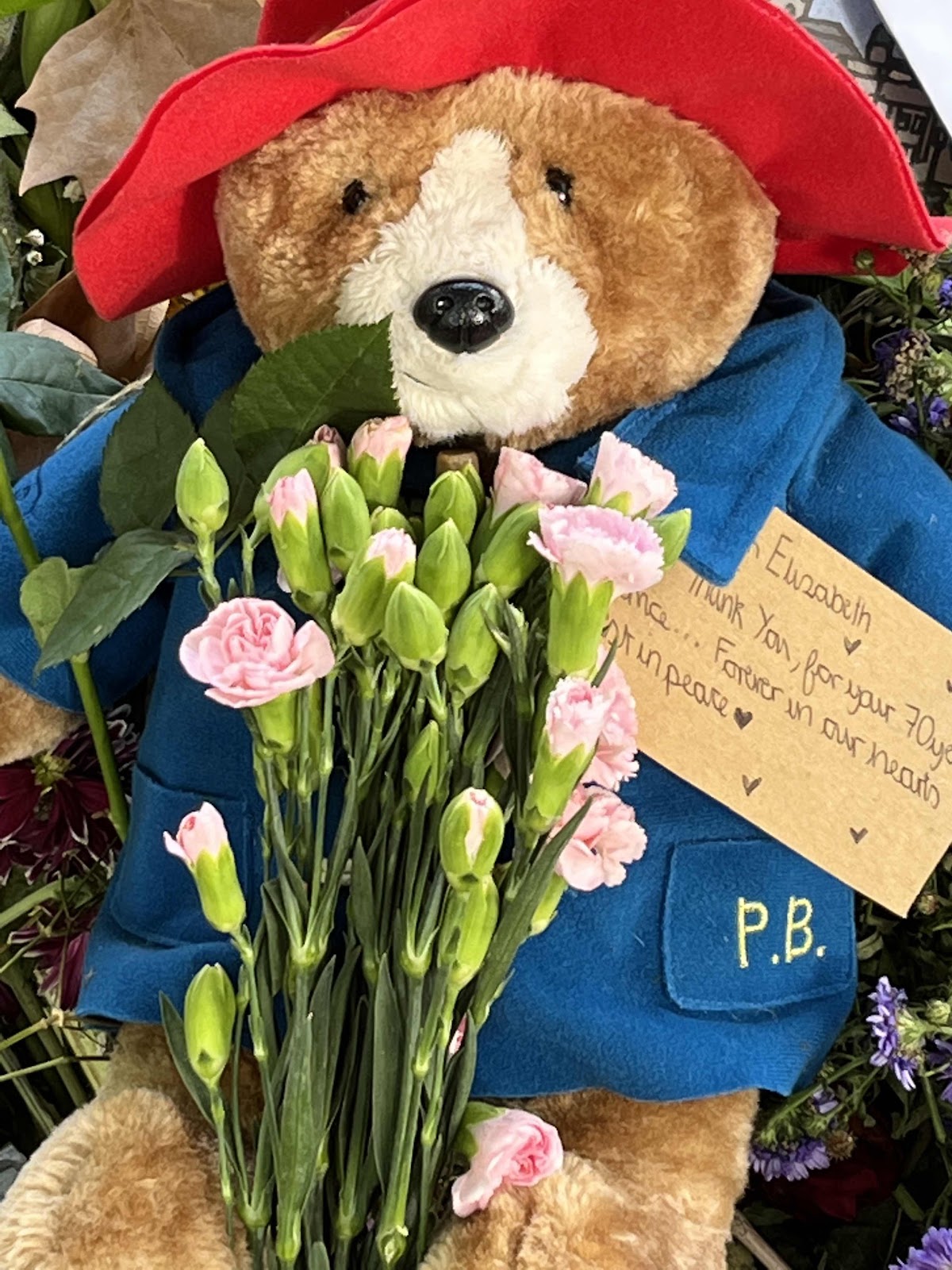 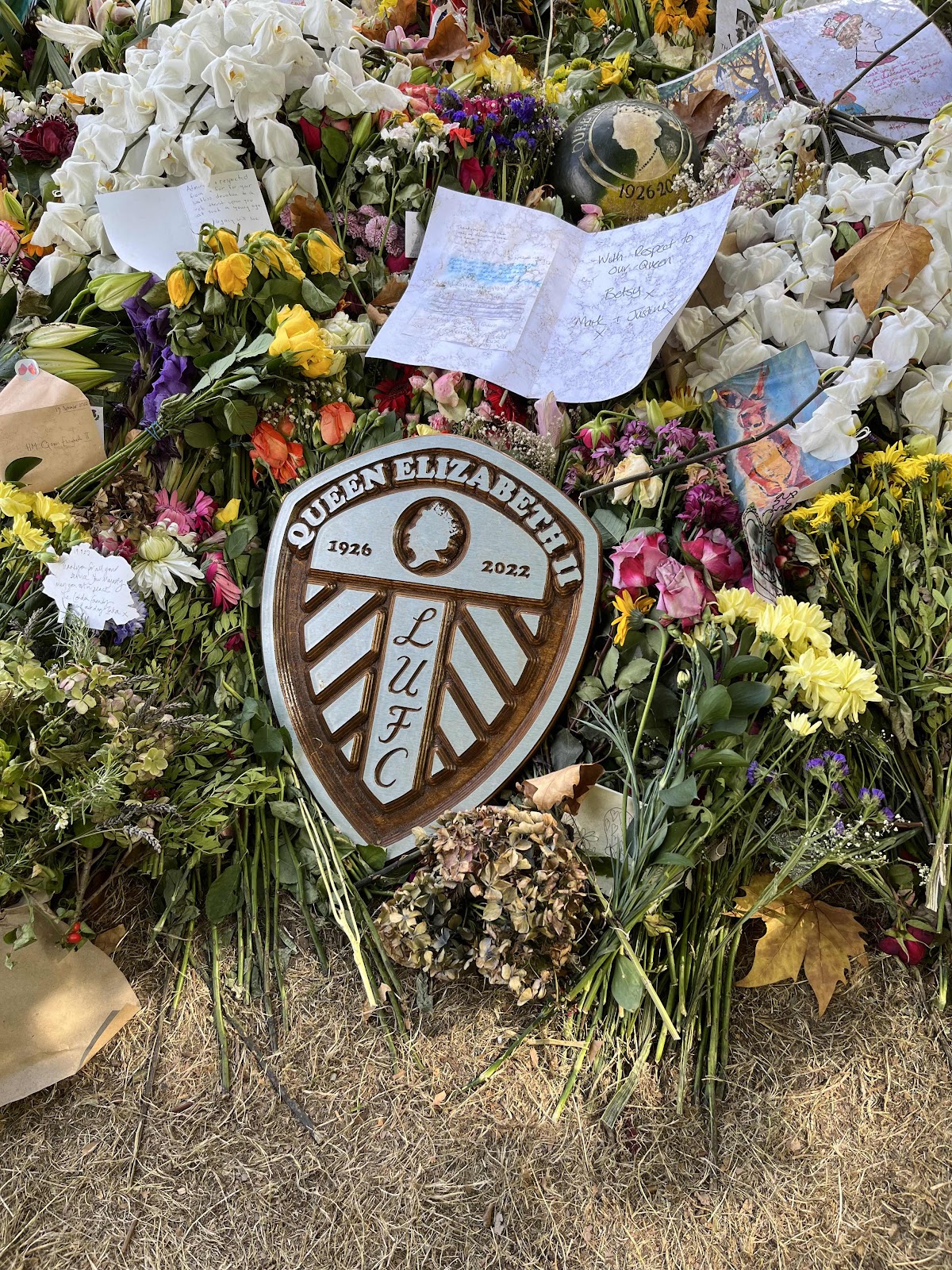 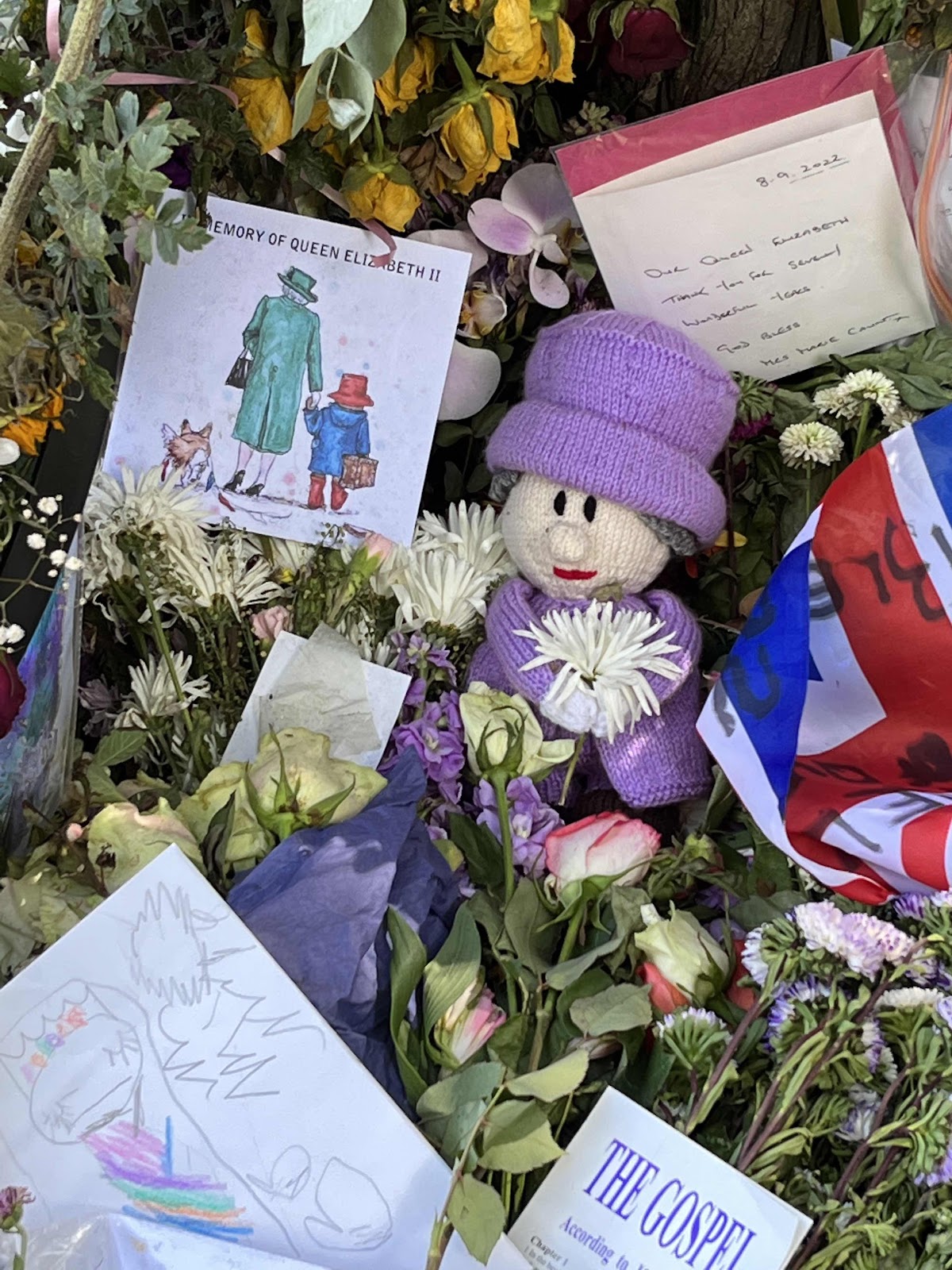 The Queen is Dead. God Save the King!

How do you describe the last ten days?
We were at the cricket last Thursday, when the Queen died.  Well, I say “at the cricket”, but rain stopped play before it started that morning and as soon as the news broke late morning that the Queen was “under medical supervision”, the umpires made every excuse they could to delay their pitch inspection, despite several hours of sunshine mid-afternoon.  From the moment they announced that several members of the Royal Family were travelling to Balmoral, we all knew that she’d died.  We also knew that there would be no cricket that day.  (There was none on the Friday, either. The England vs South Africa Test Match was eventually reduced to three days.)
Poor King Charles.  On Friday, when he made his first address to the Nation as King, he looked both shattered and close to tears.  Also, oddly defiant when he announced that he’d made Camilla his Queen Consort, and William and Kate Prince and Princess of Wales.  It was almost as if he was expecting to be criticised by the Daily Wail, the Daily Excess and the $un, newspapers that only exist to make money from their coverage of his family.  I can only imagine what he and his family are going through.  It is hard enough to grieve for the loss of a parent, without the eyes of the world being turned on you 24-7.  Couple that with a new job, as Head of State… Poor man.
Yesterday, I was planning on joining the Queue for the Lying in State.  I’d booked the afternoon off work, made my sandwiches, chilled my water bottle and packed multiple phone rechargers in my handbag.  At 8am, the queue was nearly 9 hours long.  When I logged out at 12.30, this had happened: 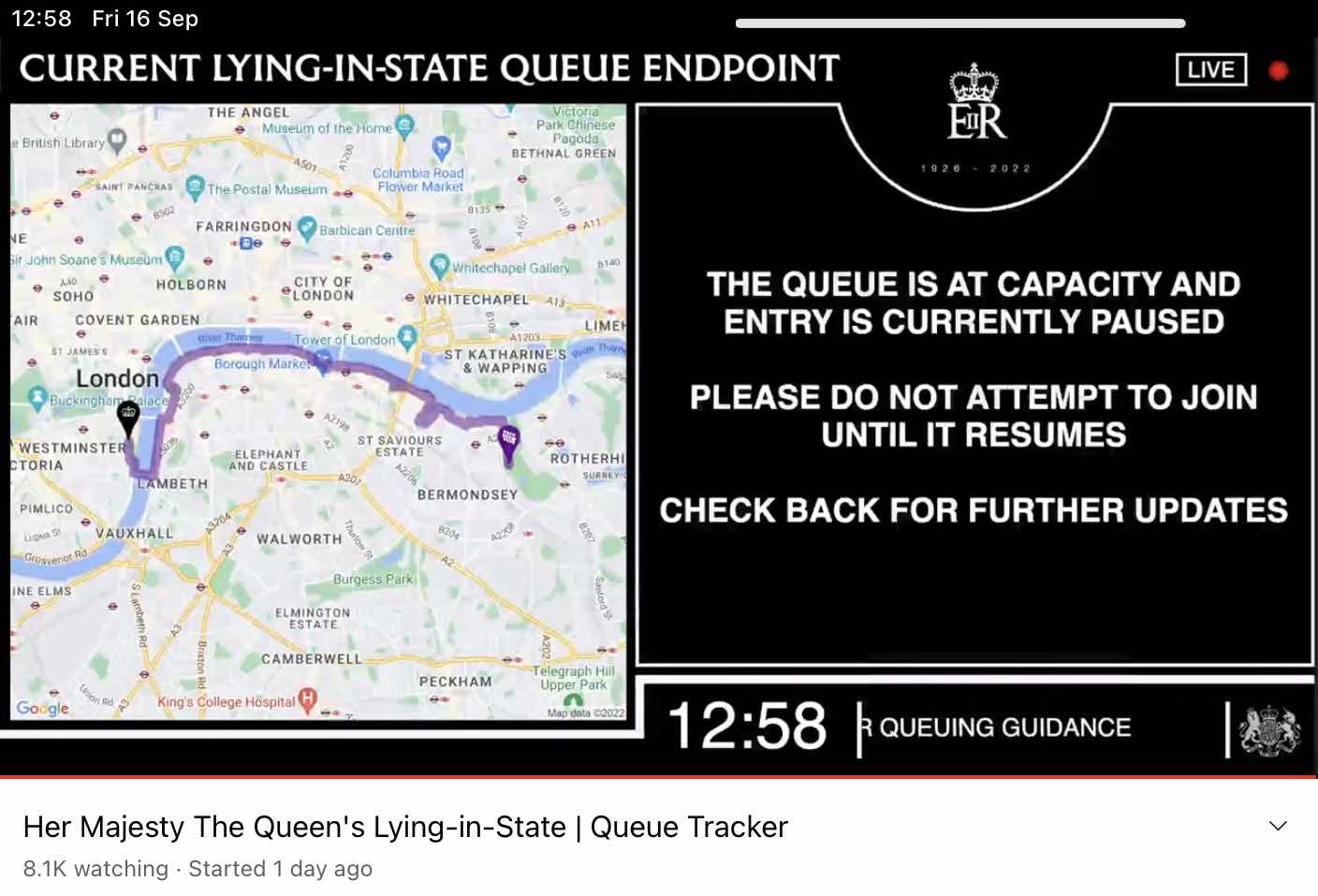 A few minutes later, I heard that there was a queue to join the Queue(!) jokingly referred to as the “QE2”.  By 4pm, they were talking about the queue being over 24 hours long, which is when I gave up on the idea entirely.  I know I can spend 12 hours on my feet, but not 24.  I don’t have the stamina for that.

Since her last journey will be from Westminster to Windsor, my plan now is to get up on Monday morning, take chairs and go sit on the side of the A4 with DH,  and wait for her to pass by.  I’ll bring my iPad and we’ll watch the Funeral via BBC iPlayer.
- Pip
Posted by PipneyJane at 14:01 1 comment: