You may have noticed that I mentioned being in Miami.  We're spending Christmas and New Year with a very old friend (a.k.a. The Lost  American or "TLA").  "We" in this instance being me, DH, and DH's best friend (a.k.a. his Brother From Another Mother or "BFAM").  If you remember my wedding photos, TLA is the lone male in the girlfriends of the bride picture.  The last time we were here was September 2006.

TLA is a wonderful host, driving us everywhere, cooking like a chef every night and putting up with his home being invaded by us all.  We've been on multiple shopping trips:  Dolphin Mall, the Eden Plaza, even Michaels yesterday so that I could buy a little something by Lionbrand Yarns (2 balls of yarn in Tardis blue so that I can make a present).
The first Sunday we were here, TLA took us to the farmers market at Pinecrest.  My first ever, official farmers market.  It reminded me of the markets we go to in Normandy, except that everyone was speaking in a mixture of Spanish and English instead of 90% French.
We had a lovely Christmas, put on the Santa hats and played with TLA's two dogs: 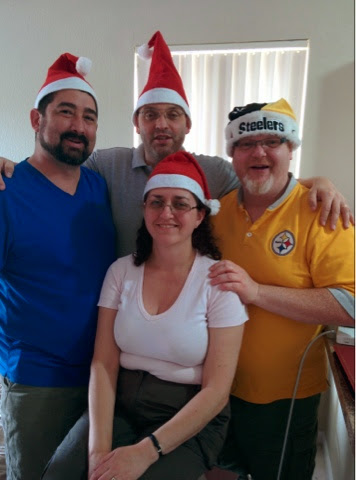 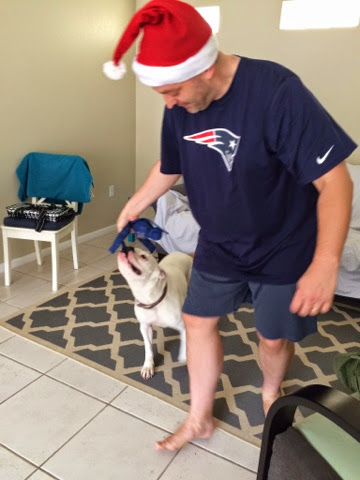 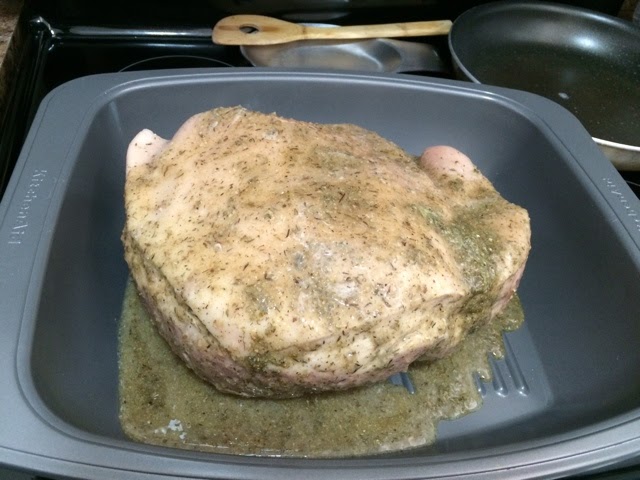 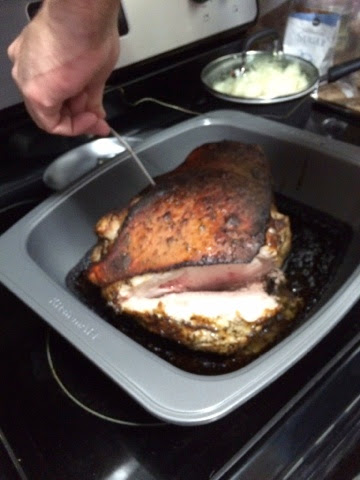 The marinade made the best crackling ever!
Saturday, we drove down to the Florida Keys and spent the day at Key Largo.  The Keys aren't as I'd imagined them. I was expecting something along the lines of Australian seaside villages, where you have a strip of shops/restaurants, etc, on one side of the main road and parking/the beach/the harbour on the other.  Instead, the main road runs through the middle of the island and there is little/no public access to the waterfront.  The properties all have private moorings and/or beaches so if you are staying in a hotel, you're fine, but if you are a day-tripper, there are only a couple of places to go.  We went to the Key Largo National Park, which has a lovely couple of beaches. 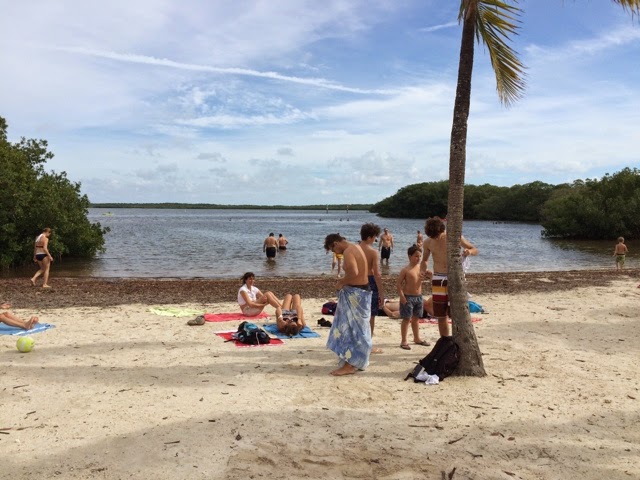 And went paddling, since I was too disorganised to remember to pack my bathers. 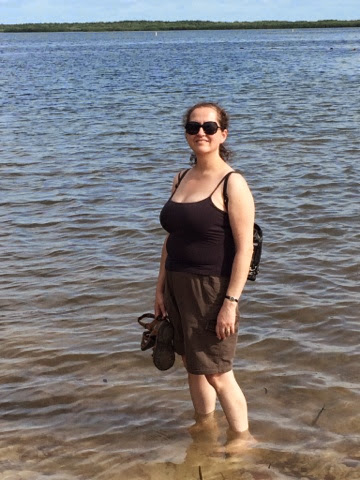 I spotted the perfect private landing across the bay 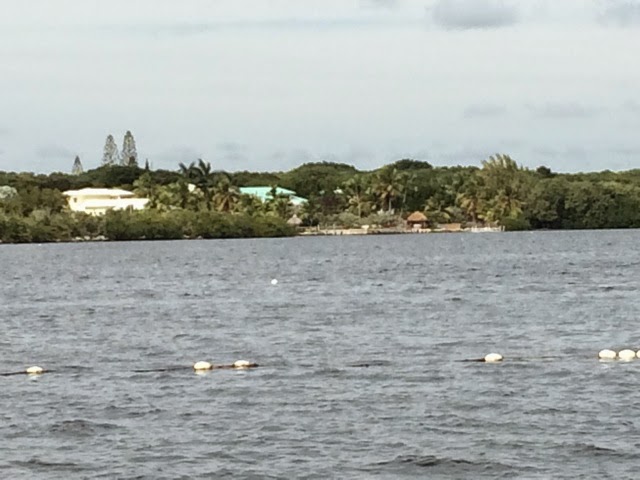 Beautiful, isn't it?  There are mangroves too 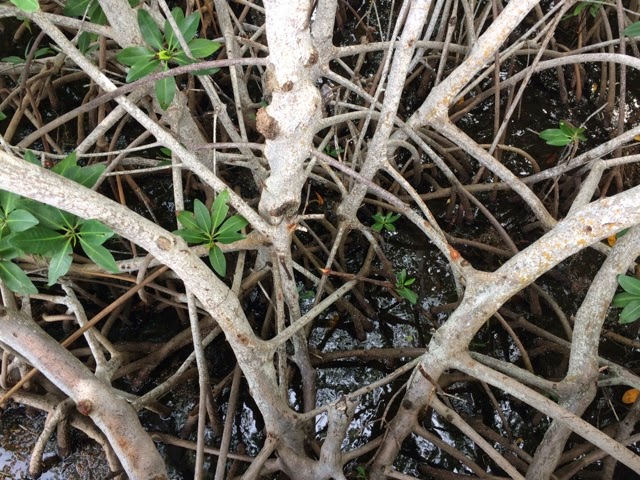 But sadly no fishing from this beach. 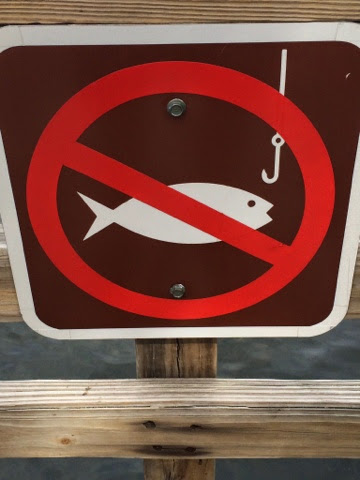 Sunday, we went to the Sun Life Stadium to watch Miami Dolphins versus the New York Jets.  Beforehand, we joined in the tailgate party in the car park. (TLA's brother, BFAM, DH and TLA.)
Only my husband would wear a New York Patriots shirt to an unrelated match. 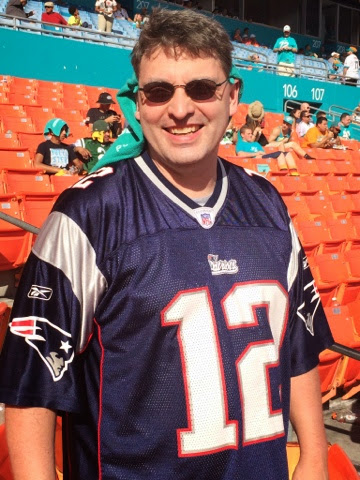 (Love the mad boy.)
Of course I took my knitting to the match, but I only knitted during the first half - it was far too hot and sticky to continue. 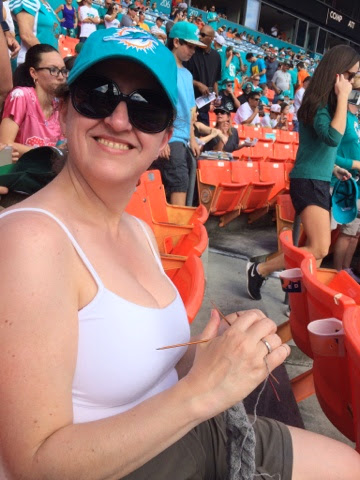 No, I have not renounced the Pats - I didn't bring a hat to Miami and was desperate to keep the sun out of my eyes.  Anyway, we were supporting the Fish. 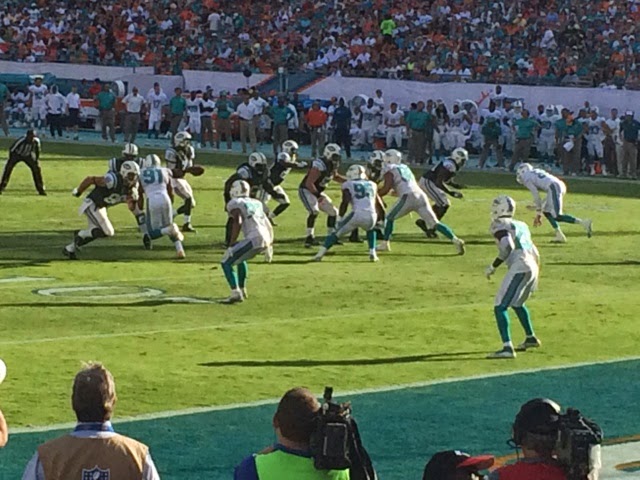 I managed to photograh the record breaking touchdown (a 97 yard dash). 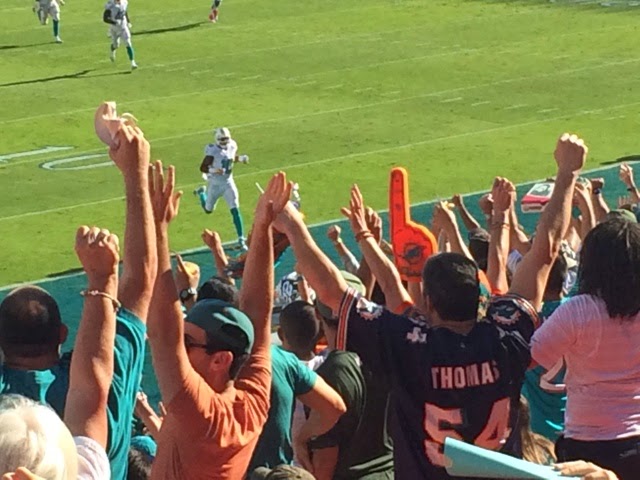 Sadly, the Dolphins lost.
Today, we went to the beach as the Bill Baggs Cape Florida State Park on Key Biscayne.  It was a beautiful place to spend the day. We were not far from the Cape Florida Lighthouse. 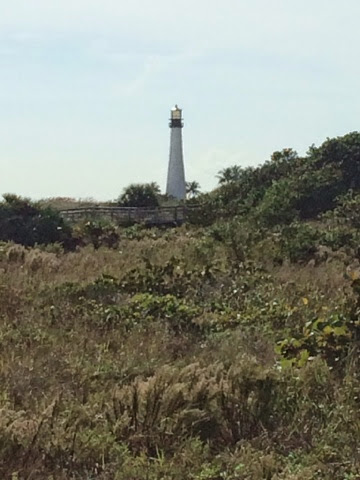 Unlike Miami Beach, this beach was beautiful and unspoiled. It was not crowded in the slightest. You can see Miami in the distance. 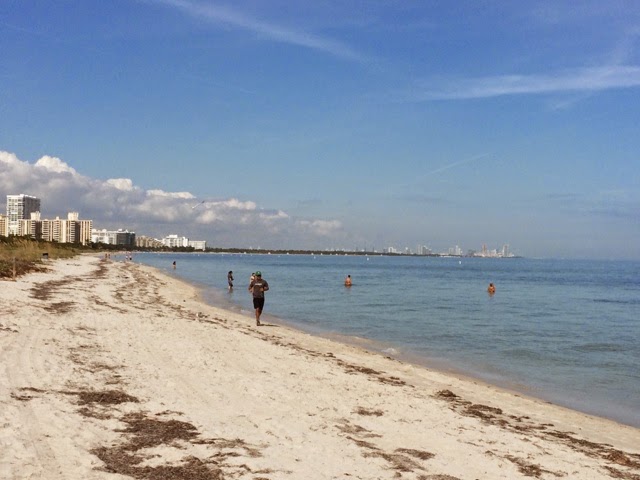 From the sand dunes it looked like ghost city, floating above the horizon. I swam, sunbathed and lazed in the sun; a very relaxing day out. 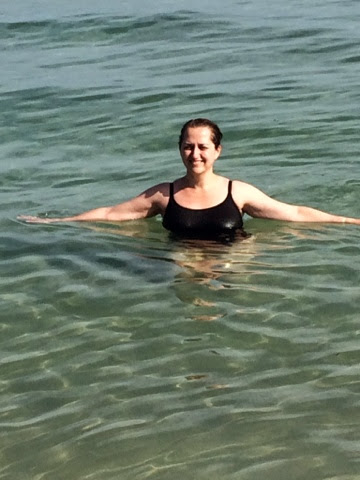 Key Biscayne is beautiful, wild AND civilised at the same time.  (Maybe 20 minutes walk from the village).  You could certainly fish from the beach we were on, in fact I saw fish while I was swimming.  I would love to go back.
- Pam
Posted by PipneyJane at 00:24 No comments:

With one eye firmly on my 2015 goals, I thought I'd share how I plan to achieve one of them: learning French.  My plan is to follow a three-pronged approach: podcasts (starting with Learn French By Podcast, available free on iTunes), the Earworm French books I bought on Audible a while ago (i had credits to use up) and (originally) the BBC's free "learn French" site which, although it says it has been archived, still appears to work (http://www.bbc.co.uk/languages/french/).  However, I can't figure out how to make the videos work on my iPad - the BBC is insisting they need Java and Flash - so I took a look at YouTube, where I found dozens of free videos, from Learn French With Alexa to something presented by Eddie Izzard.
The BBC site, I remembered from a campaign they ran a decade ago.  Their PDF's still download, so you can read those, and the links still work to the foreign language websites they reference. Besides the Beeb, what is surprising is how many free resources there are out there, entire series of learning materials that someone has kindly made available for free (although you may have to watch an advertisement from a sponsor).  Podcasts are an incredible free resource - many are produced by individuals as a hobby, for example, one of my friends learned Dutch from a podcast series started by a Dutchman trying to teach his girlfriend the language.
I guess that is the point of my post tonight:  if you have the equipment/resources to access them, then before spending money on a course or a DIY book, check out the free materials on iTunes and YouTube.  You will be amazed at what you find.
Posted by PipneyJane at 21:20 2 comments:

I am contemplating setting myself 15 challenges for 2015.  What I've come up with so far is as follows:-

1). £50 February.  Set the grocery budget for February at £50 and stick to it.  Since we have a well stocked fridge and freezer, I've decided leftovers don't count in the reckoning of the £50 but anything else taken from the larder or freezer does count towards the total spend.

2). January is for finishing UFO's/WIPs.  Excluding the current pair of socks that I'm knitting, I have five unfinished knitting/crochet projects.  Two just need sewing up.  Time to get them completed.

3). Lose 15lb in 2015.  I am short-ish and have a small frame (at my thinnest, my under bust measurement was 32 inches).  Any extra weight makes me look far fatter than my dress size since it all goes on my bust and waist. I'll use the free myfitnesspal.com app on my phone to track my progress and my calories.  My starting point will be whatever I weigh on Monday 5th January, the day after we get back from Miami.

4). The 2015 fitness challenge:  I need to exercise both to build muscles and raise my fitness level from slug to something better than couch potato.  I'm contemplating something big, like a half marathon, but right now my challenge will be to work my way through the Couch to 5K app on my phone and run 5k by Easter.  I turn 50 in 2015 - I do not want to be fat, flabby and unfit when I enter the next decade of my life.

5). The Feed Me challenge.  Can we feed ourselves out of the garden?  Probably not.  Can we grow enough veg to have at least one forming part of dinner per meal from June to October?  Probably.  I am certainly going to try.

6)  The 2015 Knit From Stash challenge.  I have enough yarn in my stash to survive the entire six years of World War 2 without buying any more (except, possibly for sock yarn).  I won't commit to that but I should be able to get through one year without buying yarn.  Two provisos:  if one of my friends/colleagues has a baby and I've run out of suitable yarn, I will buy some. And, if you give me yarn, I will happily accept it.

8)  Learn French to the point where I can sustain a conversation in the market at Port Bais next time we go there.  I want to buy fish and shellfish from the fishmonger but, right now, I can't ask questions about his catch.  We'll be in Normandy at the start of December 2015.  That gives me 11 months.

9)  To throw a fabulous 50th birthday party.  The date is set for Saturday 1st August and the venue is booked.

10)  To read and finish 15 books in 2015. I managed less than 10 in 2014, so this will be a challenge.  And, yes, that is "read" not "listen to".   Some of you will be spluttering with shock right now (yes, Sis), but since I started commuting by car, I rarely get the chance to read anything.  I've gone from 3 novels a week to virtually nothing.   My reading time is limited to the odd trip into London for work, flights and nights in hotels for work when I'm not traveling with colleagues.

11) To move into the back bedroom.  This gets on the challenge list because I've been talking about it for at least a year.  The move involves flooring the loft (so that the items stored in the back room get moved up there), building a set of built-in wardrobes and general decorating.

12) The wardrobe challenge.  This is dependent on challenge 11.  I have to sort out my clothes, get rid of worn out items and work out what I want to keep.  It isn't that I have too many clothes, but I currently have almost no storage - 3 drawers and a 1 foot wide functioning hanging space - so a lot of things get dumped in the corner, while my work clothes get hung over the door.

13)  To either make something of my new role at work or get a new job.  As you know, I am not happy with what has happened.  If I am still unhappy in April, I will be job hunting.


15). To write that book.  I've dabbled with writing for years, starting with the novel I began writing in high school.  This is more likely to be a cookbook than fiction, however.

What will you challenge yourself to in 2015?