There are a thousand recipes for dhal.  I like dhal.  For me, it's an ideal comfort food: tasty, filling, healthy/nutritious, cheap and kind to my irritable-bowel-syndrome-gallbladder-free-long-suffering gut.
To me, the smell of yellow dhal cooking is the smell of the Middle East.   In 2012, when we were visiting Oman, we dropped in on my brother-in-law for lunch and "Mr Julian", the chef in the officers' mess fed us yellow dhal and roti for lunch.  It's what BIL and his colleagues ate every day.  I begged "Mr Julian" for his recipe, which he kindly and bemusedly wrote down for me.    He seemed quite taken aback that I would want something that simple but we explained that it was something most Brits didn't know how to cook.  (Incidentally, I am using parentheses because I'm fairly certain that "Mr Julian" isn't his real name, but instead is an anglicanisation.  I think he was Bangladeshi.)
When I got back to the UK, I attempted to make Mr Julian's Dhal.  The first stumbling block was that he'd written "curry powder" on the spice list, which left me mystified until BIL explained it was Garam Marsala.  (I don't use commercial curry powder and didn't have a clue what blends are available in Oman.) Once that mystery was solved, I made a couple of batches then added the recipe to that precious pile of paper and plastic where all loose recipes ended up, on the corner of the bookcase in the old, pre-renovated kitchen.
A few months ago, I thought I'd have another go.  I really fancied eating dhal for lunch.  Sadly, I hunted high and low and couldn't find the precious slip of paper with the recipe.  I went through the cookbooks; it wasn't tucked inside.  I tried a couple of recipes from the Curry Club cookbooks but they weren't the same (one required so many whole peppercorns that even my spice tolerant stomach complained).  In the end, I resorted to the recipe that was on the back of the Natco Chana Dal packet, adding garam marsala and veg at salient points and hoping for an approximation of Mr Julian's Dhal.  I remember his boiled the dhal with turmeric and a tablespoon of garam marsala, but I can't remember what other spices he used, if any.  This, though, was nearly as good and I made a pot of it for my lunches for work this week:-
(Almost) Mr Julian's Dhal

Makes 7 portions.  Total cost £1.97, assuming 5p for the cost of the bulk-bought spices

Optional:  A handful of fresh spinach leaves or leftover rocket from a bag of salad leaves. (25p)

Optional:  a tblsp or so of fresh coriander leaves, chopped

2.       Boil the kettle.  Meanwhile, measure the dhal in a jug, make a note of the volume measurement and pour into a saucepan.  Add twice as much boiling water.  (The packet said to use 1 litre of water for 300g of dhal but that took considerable simmering to be absorbed..)

3.       Stir in the turmeric, salt and the garam marsala, bring back to the boil and simmer until the dhal is soft and most of the liquid is absorbed.  Stir regularly.   The dhal will be cooked after 20-25 minutes but it takes a while until the liquid is almost gone.  (Note:  when it reaches the point where it starts to stick to the bottom of the pan, that’s when it’s ready.)

b.      Add the mushrooms and continue frying until most of the water they make has evaporated.  Then stir in the crushed garlic.

c.       Have your frozen mixed veg ready on the side.    Sprinkle the chilli over the contents of your frying pan and stir fry until the aroma rises.  Stir in the frozen veg and fry until all their water has evaporated.

d.      Add the tomatoes and fry until most of their liquid is gone, stirring occasionally.  Stir in the spinach and coriander if using and cook until wilted.  Switch off until the dhal is ready.

b.      Measure out your rice and put in a saucepan with a tight fitting lid.

e.      Switch off the heat.  Cover the saucepan with its lid and leave to sit for at least 12 minutes. 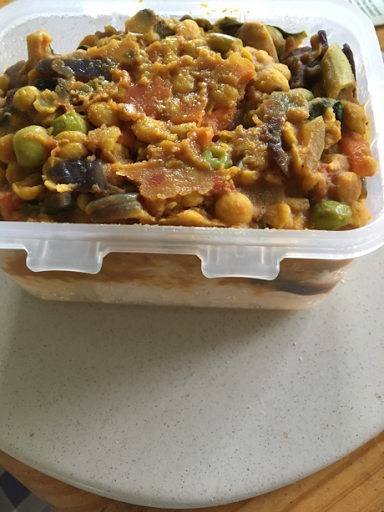 Posted by PipneyJane at 17:19 No comments: