First things first, I haven't blogged in ages and you deserve an explanation why.  The main reason is that my old laptop is virtually moribund and I couldn't take it any more; purchased over the Christmas break in 2008, with Vista as its operating system, it took forever to open any file, forever to access any website (including Blogger) and it became impossible to sync my iPhone (my main camera).  Believe me, I tried.  For the last six months, I've mainly blogged on my phone or my secondhand iPad2 - that's what I took to Miami - but there are some things that can't be done on the Blogger app, that need access to the full functionality of the Blogger website (limited as that is).

Eventually, I bit the bullet and, last month, raided my Netbook Fund and purchased an 8GB, 11-inch MacBook Air.  It is lighter than the iPad and not much larger!  It has taken me a few weeks to get everything up and running, and to get used to the Mac quirks, but "Hello World!, I'm back!". 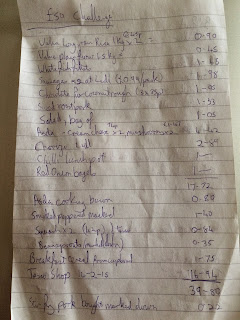 and the second sheet: 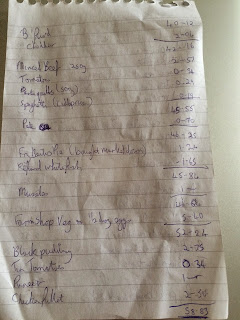 Hope you can read my hand writing.  In a moment of inattention, I binned the receipt from the Tesco shop on 14th February.  (DAMN!!!)  That was mainly to replenish things we'd already eaten, since the fridge wasn't empty on the first day.

I can hear you asking:  "so how did you really do?  Was it difficult or easy to stick to?  What did you eat?"  It took a bit more organisation than usual, since I don't usually menu plan more than a day ahead, but this time I had to figure out what we could eat that fitted into the budget without spending everything in the first fortnight.  Also, we ate out a couple of times, spent a weekend at my MIL's and had a takeaway for Valentine's Day (with associated leftovers for lunch), things which don't get counted in the challenge but affect the result.

What did we eat?  I regret that I didn't keep a written meal log - next year I will - but I can tell from the list and by memory that we had the following meals:-
Unless it included pasta, we ate rice with most meals (nothing new there).   also baked one loaf of bread, drank lots of squash, took leftovers for lunch to work most days (included in the budget) and packed a picnic of bagels, sliced pork (from the condemned food aisle), and salad.

We will definitely be doing this challenge again, next year, and I promise to be much more organised about it.

Posted by PipneyJane at 10:36 No comments: