Thank heaven for the Sanity Fund

Yesterday, I informed DH (and the blogsphere) that I'm broker than broke and had resolved to give up spending for January. Then I promptly went shopping for a pair of boots (black, knee high stretch with 2" heels - £34.25 in the M&S sale). Sounds contradictory, no?

The money for the boots came from my Sanity Fund, a concept I've borrowed shamelessly from Anita Bell, the author of "Your Mortgage and how to pay it off in 5 years - by someone who did it in 3". I've been a big fan of Anita's ever since I bought her first three books in Melbourne Airport six years ago. I read them back-to-back on the flight back to the UK.

After they purchased their first home, Anita and her husband lived off one salary whilst using the other to pay off their mortgage. The first salary paid all of their basic living costs as well as a full mortgage payment. One of the strategies that stopped them both feeling deprived, going mad and having a big blow out was the Sanity Fund. Each of them got a certain amount of money each fortnight to do with whatever they wanted (Aussies usually get paid fortnightly). Anita kept track of her Sanity Fund on a wallet card (a home made index card she kept folded in her wallet). On it, she listed items she really really wanted to purchase, portioning out her Sanity Fund each pay day until she'd saved up enough money to buy whatever it was. She'd take the Wallet Card out every time she felt tempted by something, to remind her of her goals.

The Sanity Fund and Wallet Card concepts struck a chord in my mind that has reverberated ever since. How many items were on my wish list but when I came across them, I never had the money to buy them? Things that didn't really justify becoming line items in a real budget but that I lusted after in a vague "Oh! I wish I could buy one of those!" way? They weren't mega-major purchases, just things like an expensive pair of leather boots. So I borrowed Anita's ideas and made them my own.

Initially, I started with £60 a month which was automatically transferred to a deposit account at my bank. Gradually, I've upped the money and split it between three accounts at two different banks, based on my goals. Over the years, I've used my Sanity Fund to buy those expensive boots (target £120, actual cost £95), a second-hand piano, lots of yarn (from the "Craft" budget) and to save for a very expensive mobile phone (that's the money I'm going to blow on my new laptop instead). Here's a copy of my Wallet Card from the middle of last year (apologies for the poor quality of the scan). 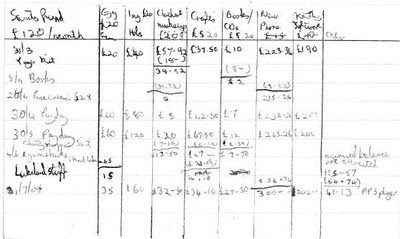 Sure, I could have just saved the money in the bank, but I've found carrying around a Wallet Card concentrates the mind. It's daily, sometimes hourly, reinforcement of my mini-goals. If I'm tempted by something, I know immediately how much money is available. If it costs more than the money accrued, then I either work out a trade off ("I can take £xx from Clothing and put it back next month") or I'll decide it isn't worth spending my money on. That's what I'm doing with the laptop. There won't be much money left in the fund after I buy it, maybe £100, but that's OK. I know I can save up again for a new phone and, as for the knitting software I wanted, maybe I don't want it as much as I thought when I began saving for it (the money has been there for nearly a year).

I like the sound of that. I'll have to check out anita bell's books. thanks.