Fashion on the Ration vs Yarn Addiction

I mentioned in my last post that I’m doing Fashion On The Ration again this year.  My big weakness isn’t clothes, it’s yarn.  I have a stash of humongous proportions, so I don’t need any more yarn, but I still managed to blow 40+ coupons on it last year.  Seriously, I bought so much yarn that I lost count!  Some of it was one-off-specials, the sort of thing you find at shows but don’t see every day:  Tweed Valley Clotted Cream 4-ply; some Poledale sock yarn.  I bought a jumper’s worth of each.  There’s no excuse for the rest:  12 x 100g balls of Regia sock yarn, in three different shades of grey (it was a really good price, though); plus several assorted skeins of sock wool, which has now been turned into socks.
My plan for this year is to knit up at least 20 balls of yarn from stash AND NOT BUY ANY.  Right now, I’m knitting another Blanche Too, from Susan Crawford Vintage.  The first one was out of Debbie Bliss’ Wool of the Andes; this one is out of Debbie Bliss Pure Silk DK, which I’ve had in the stash since I worked in the centre of Reading in 2006 (I bought it in the sale at John Lewis).  I’m almost up to the armpits and started the year on skein 3.  Now on skein 4; it should take another 4 skeins, so that’ll be 6 off the target by the time I’ve finished.
I’ll update the sidebars in a moment.
- Pam
Posted by PipneyJane at 15:33

My yarn stash is about 8 big Sterilite tubs (the 56 quart size). I need to go through it and either plan something for each skein, and then start working on those plans, or weed the skein from the stash. The school does a weaving project each year, and they'd love the partial skeins of leftovers, I just need to have the time and space to tackle it.

And of course, not buy more yarn this year. Easier said than done some days.

I am working on using up the yarn stash as well. I seem to collect yarn like others collect .... well whatever people collect. 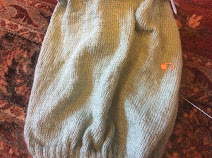 Susan Crawford’s Blanch Too, in Debbie Bliss Pure Silk DK which I purchased in 2006. (The photo does not reproduce the colour properly.). Started 14 November 2019.

2020 Fashion on the ration challenge

Based on the original 1941 Clothing Rations, I have 66 coupons to spend. This year, I’m not doing the challenge alone - several ladies from the Old Style Board at www.moneysavingexpert.com have joined me.
So far I have spent 0 coupons:-